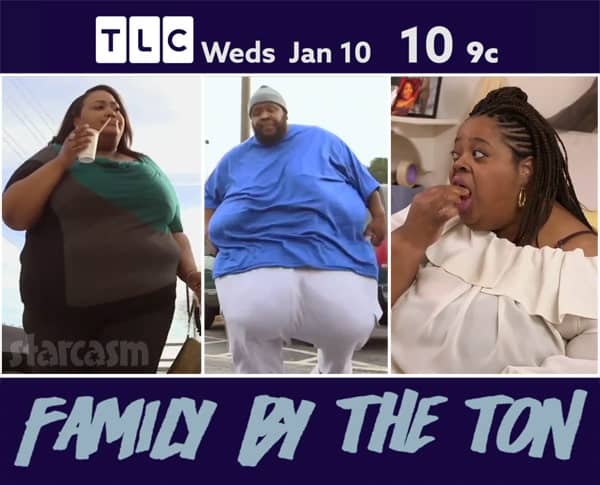 TLC’s extreme weight loss series My 600 Pound Life returns for its sixth season on January 10, and it will be followed by a brand new show in a similar vein. Family By the Ton is a three-for-one version of My 600 Pound Life as it follows the story of three Georgia cousins whose combined weight is nearly 2,000 pounds.

* In some browsers TLC’s embeds play automatically, so you will need to scroll down and pause the trailer for the new season of My 600 Pound Life.

Family By the Ton actually starts with one of the cousin’s mothers, Beverly, undergoing weight loss surgery and her hopes that the decision will motivate her daughter, niece and nephew to follow in her footsteps.

Beverly’s complications after surgery are hard for her daughter, Naomi Anderson, to witness, but Naomi’s dream of starting a family continue to motivate her to turn her life around.

Naomi’s cousin Drew Stewart is in denial about his addictive eating habits, and whether or not he opts for surgery depends a lot on whether or not he is able to finally admit he has a life-threatening problem. 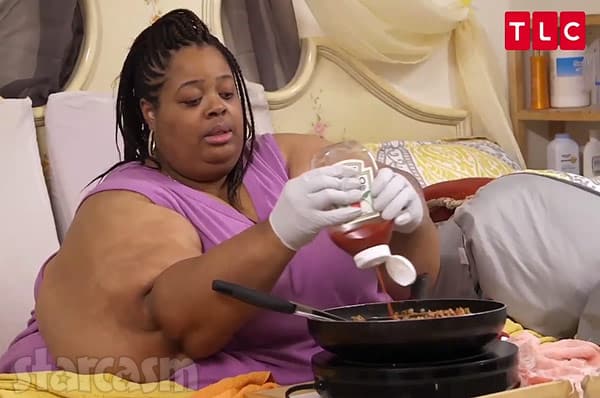 Naomi’s cousin Chitoka Light has no doubt that her eating habits are ruining her life as she has been bed-bound for more than three years due to her morbid obesity. She must literally take her first steps in the right direction in hopes of qualifying for surgery.

Although she doesn’t provide any spoilers, Chitoka has posted about her appearance on the show on Facebook and she had this inspiring message about sharing her story:

Many of you know I have been struggling with my weight for many many years. This past year I have embarked on a weight loss journey with my family that has changed my life for the better. I invite you to come share in the highs and lows of this journey as I pull back the curtains of the very real struggle of a fight to regain my life.

She does say that her weight loss journey “changed my life for the better,” so I think we can at least be optimistic about how Chitoka’s story will go.

Thankfully, the family won’t be facing the additional burden placed on My 600 Pound Life cast members in that they will not be required to travel to Houston, Texas to see Dr. Nowzaradan. Their journey and surgery will be under the supervision of Atlanta-area bariatric weight loss surgeon Dr. Charles Proctor, Jr.

Family By the Ton premieres Wednesday, January 10 at 10/9c on TLC and will include six one-hour episodes.

If you are curious about the new season of My 600 Pound Life, that will premiere just before Family By the Ton at 9/8c on January 10. Season 6 will include 14 NEW TWO HOUR EPISODES! That is 28 total hours!

Here’s the preview trailer followed by the full scoop on the new season from the TLC press release:

MY 600-LB LIFE, the addictive TLC series returns for its sixth season on Wednesday, January 10 at 8/7c. With 14 new two-hour episodes telling the most heartbreaking, yet inspiring stories, the series follows those who have found themselves at their breaking point with extreme life-threatening obesity. Viewers will see first-hand their struggles of addiction, dependence and the inevitable impact their condition has on their closest relationships; from children to spouses to parents to best friends, many who both serve as caregivers and enablers. Each episode will give viewers an inside look at the emotionally and physically tough journeys to life-saving surgery with Dr. Younan Nowzaradan, and their continued incredible progress thereafter, living the lives they had only dreamed of.

In the season premiere, we meet couple Lee and Rena, who both struggle from obesity. They first met in bariatric rehab; the two of them grew close but, when the clinic told them they couldn’t be together while remaining at the facility, they discharged themselves to try to live on their own. However, while together, their weight skyrocketed even more, admitting that their favorite thing to do together is to eat. When we meet them, Lee can barely leave his bed without Rena’s constant care, but with Rena’s own obesity issues, she won’t be able to be Lee’s caretaker much longer. Desperate to have a “normal” relationship, Lee and Rena make the difficult journey from Missouri to Texas to seek out Dr. Nowzaradan’s help, in the hopes that they will both be able to get gastric bypass surgery to save themselves and their future as a couple.

In addition to the new season, TLC will also be bringing back the Assanti brothers from last season in a special episode of MY 600-LB LIFE: WHERE ARE THEY NOW? airing on Wednesday, January 3 at 8/7c. On December 18, viewers can watch an early premiere of the episode before it’s on TV by downloading the TLC GO app or visiting: TLC.com/My600lbLife.