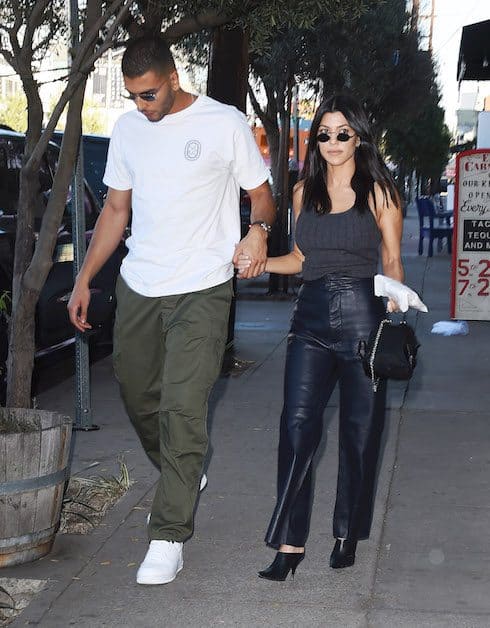 The ranks of Kourtney Kardashian’s kids may soon be growing, if reports of Kourtney and boyfriend Younes Bendjima’s “serious” relationship are to be believed. A few new tabloid pieces have it on good authority that Kourtney is ready for a fourth child–and her first with someone other than Scott Disick.

Before we jump into that, though, it’s worth pointing out that rumors about Kourtney Kardashian’s kids getting a new little brother and / or sister have been flying for weeks. Kourtney herself set some of them off this autumn, after joking with a Grazia Daily interviewer that she was already pregnant. Before that, there was the time that Kourtney “just *had* to get pregnant” because she was feeling left out; before that, it was pregnancy speculation based on a scene in the KUWTK Season 14 premiere. And before all that, shortly after news of Kylie Jenner’s pregnancy broke, prevailing gossip claimed that Kourtney was so in love with Younes that she “could become pregnant at any moment.”

So: keeping earlier reports in mind, the latest word on Kourtney Kardashian’s kids soon numbering four comes from Inquisitr, which claims that Kourtney is “allegedly hoping to get in on the recent Kardashian / Jenner baby boom.” Said their report’s source, “[Kourtney] talked about it with Younes and he is definitely down to try for a baby…soon.”

Kardashian fans hoping for four simultaneous family pregnancies may be out of luck, though: the insider also said that Kourtney’s plan is to wait until Kim, Khloe, and Kylie have all had their babies before announcing she’s expecting her own.

coming soon to a bank near you

In related news, People’s latest dispatch from the world of Kourtney and Younes says that the two are still going “hot and heavy” — so hot and heavy, in fact, that they “may spend Christmas” together.

Though the article at first seems to suggest that the two would spend the holiday in bed at some remote, romantic point, People’s source quickly veers into family territory. Again referencing Kourtney Kardashian’s kids, the source said that “Younes has met her kids,” before elaborating.

“Kourtney’s family really likes him,” the insider went on. “[Younes] is the opposite of Scott. He doesn’t party, isn’t flashy and really treats Kourtney with a lot of respect. It’s obvious that he really cares about Kourtney….It’s definitely serious. No one thought their relationship would last this long, but Kourtney is very happy.”

Will Khloe Kardashian have the family’s second pregnancy announcement of the year?