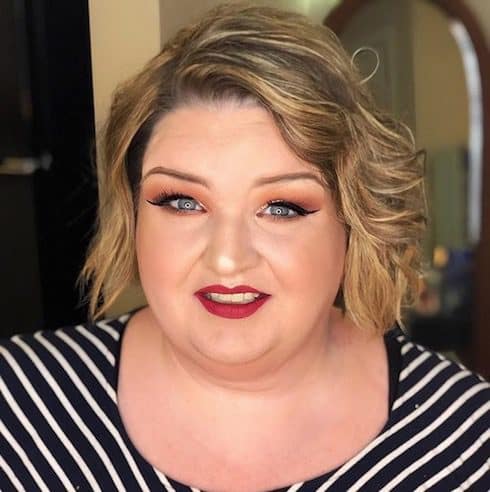 It’s been a long, hard journey for Amanda Johnson from Family By The Ton — and it’s not over yet — but it sounds like Amanda has renewed resolve to overcome whatever happens next. The latest Family By The Ton Amanda update sees the 37-year-old offering some good news, as well as a few beautiful new pics.

As we’ve learned over the last few weeks, Amanda, who joined Family By The Ton Season 2 with three other King Family members, was diagnosed with cancer just over two years ago. Complicating matters is the specific type of cancer from which Amanda suffers: “Endometrial cancer,” she explained, “is caused in some part by being obese. So I feel like I did it to myself. Or maybe it’s my punishment for abusing my body.”

Amanda further explained that her predicament involves losing enough weight to undergo the dangerous surgery. Essentially, she has to figure out how to beat one of the main symptoms of her disease before she can overcome the disease itself:

In order for me to have the surgery to remove my cancer, they invert you on the operating table, so right now if they did it, all of my weight would essentially crush my organs and I would stop breathing until it killed me. So I need to lose half my body weight before I can have surgery for my cancer.

However, as we revealed in our last Family By The Ton Amanda update, since filming concluded, Amanda has decided to go ahead with still-risky gastric sleeve surgery in order to hasten her weight loss.

“This will not be easy,” Amanda wrote, “and the operation is dangerous for someone my size, but it’s the best move to help me lose this weight so I can have a fighting chance to beat this cancer.”

Amanda’s determination was obvious then, and it’s even more apparent now. But Amanda is also looking forward with optimism, something it sounds like she maybe hasn’t done much of lately. For starters, she just signed up for her first-ever footrace — the infamous the Black Light 5K at the Atlanta Motor Speedway this coming June 29th!

Just signed up for my first 5k! I’m not ready yet but I have until June to get ready! And best believe I will be ready!

Amanda’s fellow family member and castmate Amy Long will be at the race as well, and the two talked and laughed about their choice of wardrobe in the comments for the above update.

“I’m creating a team for us,” Amy began. “DM me some team name ideas… gotta make it good.”

“Yes!!,” Amamda replied. “I’m so excited I even got the black light knee socks ?”

And Amanda joked right back: “Yes it’s going to be hot as hell but I should be in booty shorts by then ?”

On that note, Amanda also recently revealed that for the first time in a long time, she can “finally see a future worth fighting for.” Amanda shared her thoughts in a semi-birthday update: her actual birthday is January 30th, but, as she wrote, in light of recent events she decided to celebrate a birthday month instead of just a single day:

Happy birthday to myself!! Ok my birthday isn’t until the 30th but this is the first year I have even cared to have a birthday. So grateful for the last year and finally see a future worth fighting for. Because of this I’m celebrating my birthday all freaking month lol.

You can keep up with Amanda and offer her words of encouragement on her Instagram page here. Family By The Ton Season 2 airs Wednesday nights at 10 on TLC.

(Photo credits: Family By The Ton Amanda via Instagram)

BEFORE & AFTER Beyonce says she lost 65 lbs. by going vegan