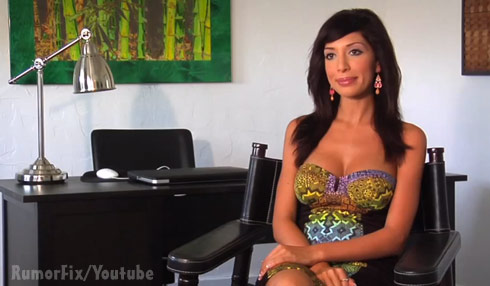 Former Teen Mom star Farrah Abrahan recently sat down for a video interview with RumorFix‘s Richard Ayoub and, in what is sure to inspire numerous headlines, Farrah opened up about everything from her daughter Sophia being in therapy to Jenelle Evans’ recent pregnancy.

For the first two videos addressing Sophia being in therapy and Jenelle’s pregnancy we have transcribed most everything Farrah had to say, but for the other clips we have highlighted certain quotes.

(For Farrah’s comments on her new business venture in Austin, Texas, you can watch that clip in our post about her restaurant Froco Fresh Frozen.)

Take it away Farrah!

ON SOPHIA BEING IN THERAPY

I have my daughter going to therapy off and on, yes. And I think I do that because she’s so well known. People always recognize her, and they’re like, ‘Teen Mom’ and ‘Farrah,’ and sometimes my daughter really just is, like, talking about fame and those things.

Because of all the popularity and people talking about it around her, she starts acting that way. And on top of that she, you know, keeps recognizing and keeps missing that her dad is not there. And I’ve done my best and continually do my best in approaching…her not having her dad there in the best way. And I think therapy’s best.

Some of my other girlfriends have their sons and their children in therapy for autism and different disabilities and other hardships that a whole family has to deal with. So, when your family’s not behind you, and when it’s hard, I think therapy and having a counselor there to guide you and organize your next steps is the proper thing to do.

Look, I don’t want my daughter being screwed up and thinking she needs to be in front of cameras or being a talent person. I don’t want her believing that’s the ‘ALL’ in life. It’s really a distraction.

So, my daughter loves to dance and she plays piano, she’s amazing at a lot of different things, and I only help her excel at those things. Not everybody goes through what we go through, and I try to make sure that she has as normal life as possible in a great atmosphere. And hopefully she will come out level headed.

Congrats to her. I don’t follow their lives, I don’t watch their shows because I am beyond that. And I will say I only hope — and I see in my life that — women are not continually having babies and putting hardships and having the drama and the hardships around their children. I’m really not about living that lifestyle any more, and I only want to make the best environment for my daughter.

I would never go find a boyfriend right now, get pregnant, have a second child, without a plan. I mean, maybe the public should comment on how they feel about others who are having children and not really changing the cycle.

* Jenelle has since responded to Farrah’s comments on Twitter:

My dad’s writing a book, maybe he’ll be open in his book about that.

I don’t want to make my parents out to be bad. I’m actually in a good place with my parents right now.

He probably just doesn’t want to deal with that on a public level.

I’ve been pretty abused, so I just felt that if it’s the right time for me to share things I do try to share, and I don’t care if I get called a liar or not. Things really happened.

Lots of my readers who read My Teenage Dream Ended, which was very successful, they were excited to read this and see more of how I am developing as a writer and as an author.

I truly haven’t done a lot of things Fallon Opal [the main character in the novels] has. I felt like this was my way of doing something without doing it.

I’ve chosen not to be involved in adult entertainment as a career. Yes, I’ve made business choices that were wise out of certain situations of my phases of life and me experiencing, but that’s not where I stayed.

Who better to write something about celebrity sex tapes than myself?

ON GETTING PLASTIC SURGERY

I think if other women feel that that is what will make them feel whole and satisfied, then I think that’s their healthy way of helping themselves.

I would consistently look in the mirror and it was very sad. I mean, you don’t want to hate your face when you’re looking at yourself, so it’s pretty sad.

I have had rhinoplasty, a chin implant — and then I removed it, which others probably saw — and then I had a boob job. I had two. Oh, I did do the lip injections, yes.

Personally, for myself, my nose would get in my way every day. So rhinoplasty was needed. I also did cosmetic surgery on my teeth.

If I’m analyzing something over and over every day instead of going out and having fun and thinking of other things, I’d rather bless myself and get the surgery and move forward in my life.

[On approving of Sophia getting plastic surgery] If she is coming to me with a chronic issue and staring at herself every day in the mirror for hours and hours on end, yes. I would say, ‘Let’s go consult somebody who is knowledgable about this. Let’s figure out what is the safest and healthiest thing to do and not go overboard with it…because I never did anything, I think, ‘overboard,’ and I would hope that, you know, my confidence and my self respect is where it needs to be.

I encourage women to take care of themselves, invest in themselves and be happier.

ON THE BIRDS AND THE BEES TALK WITH SOPHIA

I just want to make sure my daughter makes better choices than I have.

Hopefully when [Sophia] is like 14, 15, the birds and the bees — I’ll be, like, ‘Look. I have books, I have a memoir, I have TV shows. We’re going to sit down and watch and read these things.’ And I think it’s going to speak for itself.

VIDEO Debra Danielsen warms up Santa’s lap at Bass Pro Shop, tells him not to come down her chimney