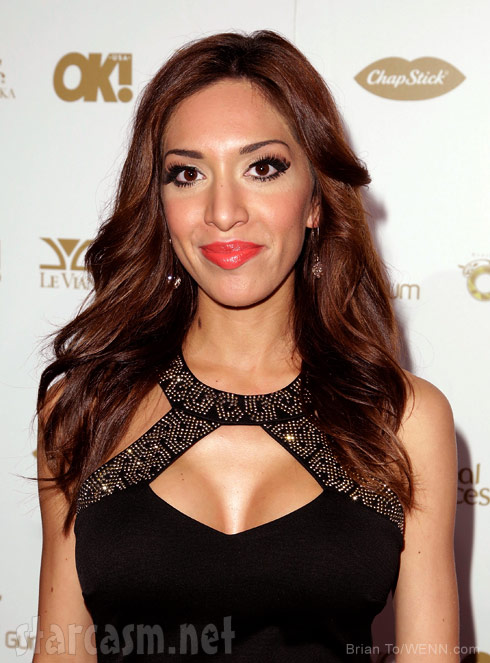 Farrah has been excitedly tweeting about her plans for Grammy weekend (in between angry tweets at her Couples Therapy cast mates) and even posted a keek video from the bash, which featured performances by Jason Derulo and Jordin Sparks:

Farrah captioned the video, “GRAMMY WEEKEND:) Love you #LA” She also shared this photo of the jewelry she was wearing to the event, which was provided by Laura Liberation in New York:

Got my jewelry ready to fly for Grammy weekend 🙂 @LauraLiberation #Chic #LA pic.twitter.com/aR9RBpntyz

Here’s another angle of Farrah’s look:

While at the event, Farrah was “interviewed” by a video camera guy who asked her about Justin Bieber’s recent DUI arrest as well as the recent admission by NFL kicker Steve Weatherford that he is a huge fan of Teen Mom:

Here’s another view. (Farrah’s segment comes after Joanna Krupa, right around the 1:15 mark.)

The OK! Magazine event was attended by a ton of tabloid headline-grabbing celebs, including a number of housewives as well as their fellow Bravolebrity Lilly Ghalichi from Shahs of Sunset, who posed for this photo with Farrah on the red carpet:

It’s unknown if Farrah will be at the actually Grammy Awards later tonight, or any Grammy after-parties. We will be sure to keep an eye out and let you know.

PHOTOS Farrah Abraham reunites with Sophia in the U.S., gives her $1.3K from the Tooth Fairy