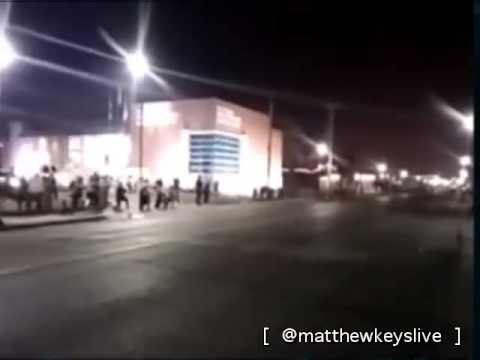 Police sources and witnesses at the scene estimate anywhere from 50-100 people took part in mostly peaceful protests outside of the Ferguson PD on Wednesday night, just hours after the resignation of embattled Ferguson police chief Thomas Jackson was announced. Then, around midnight, gunfire erupted – reportedly coming from a grassy hill some distance behind the thinning-out crowd of protesters. You can hear witnesses screaming obscenities as they bolt from the area, and see previously action-ready officers fully engaged, seeking cover with weapons drawn.

The two police officers shot in Ferguson overnight were immediately hospitalized, with several sources reporting both men are expected to survive. “I don’t have an official status on what their condition is right now,” Belmar told the media early Thursday morning. “They are conscious, however those are very serious gunshot injuries. They’re being treated right now. The officers will not be identified at this point.”

Tensions in the small Missouri town have been boiling over since August 2014, following the shooting of unarmed black teenager Michael Brown by white Ferguson Police Ofc. Darren Wilson. Since last summer, a spate of police involved shootings of unarmed black men and juveniles across the country have only increased suspicion toward police. On the other end of the spectrum, the senseless execution-style killings of two NYPD officers in Brooklyn four months later has law-enforcement on edge.

Even as fellow officers tended to the two officers shot in Ferguson late Wednesday for no reason other than standing in front of Ferguson PD, wearing uniforms – even in that moment – emotions moved some to taunt police. “Acknowledgment nine months ago would have kept that from happening!” one male protester can be heard shouting in the video above.

No matter what valid points each side may have – and both sides arguably have their share of valid points – the answer should never be violence, and the solution should never come from the barrel of a gun. The two police officers shot in Ferguson are not the enemies; the protesters are not the enemies. Hate and violence are the real enemies, but until all people can communicate with and understand one another more effectively, they will remain the powerful and damaging forces that they are. When it comes to race in America, for all our considerable progress, we still are a long, long way from understanding.