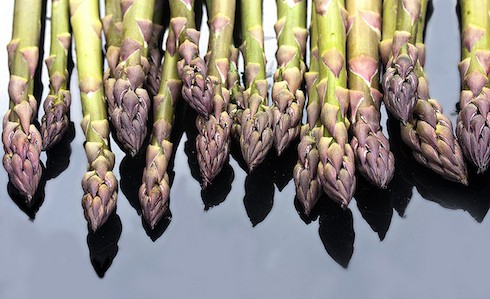 The Great Asparagus Water Prank of 2015 is officially over. Unfortunately, the joke was on us. Whole Foods execs have yanked asparagus water after ridicule of the product went viral. The company is now pleading with its customers to overlook the gaffe.

Somewhere in L.A., Whole Foods executives are laughing at all of us.

That image inspired a bevy of write-ups, including this gem from Eater. In true Daily Show exposé style, the quotes from Whole Foods’ employees were the most damning of all: “It’s water,” said a young man from the Brentwood CA store’s produce department, who (rightly) did not want to give his name. “And we sort of cut asparagus stalks down so they’re shorter, and put them into the container.”

“It’s…to drink,” the young man said, when asked what the water is for.

It is not, however, some sort of vegetable broth-based concoction. It is just asparagus, floating in water, sold for $5.99 a bottle. (Asparagus itself, Eater points out, goes for $5 per bundle at Whole Foods.)

Now, a rep for Whole Foods has apologized for the asparagus water debacle, and wants customers to please, please know that this only ever happened in one store:

There’s been some miscommunication around this product. It was meant to be water with the essence of vegetables and/or mushrooms to be used as broth (similar to a bone broth), which are typically made over a long period of time soaking in water. The product was made incorrectly and has since been removed from the one store, Brentwood, where it was carried. We would love your help clarifying that this product is not available and was removed from the Brentwood store as soon as this issue was brought to our attention.

Whole Foods stock is currently holding steady at $34.14 per share.

Shailene Woodley makes own her medicine, cheese, and toothpaste, forages food, and collects spring water from a mountain

PHOTOS The biggest Bloody Mary in the world is intimidating