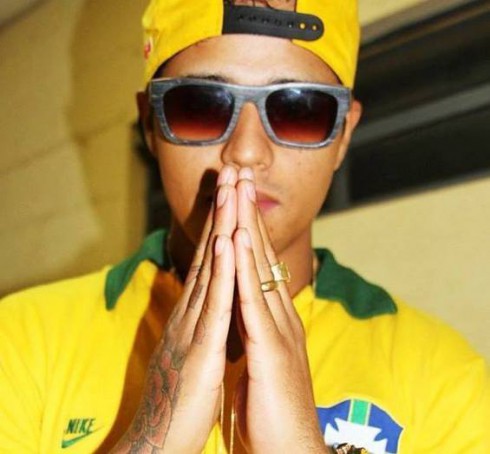 MC Daleste, an up-and-coming Brazilian rapper with a sizable fan base, was shot and killed while performing on Saturday night.

The 20-year-old, whose birth name is Daniel Pellegrine, was midway through a set when he was shot in the abdomen. In shaky footage of the scene, MC Daleste is seen slumping over before audience members scream and the crowd disperses. According to Billboard, the young rapper was taken to an area hospital where he died.

WARNING: The following footage graphic and tragic. The shot occurs at the 1:05 mark.

Police have not named any suspects yet.

Before his untimely death, MC Daleste was on his way to fame in his home country. One of his most popular songs, Em Teu Olhar, had more than 4 million views on YouTube before his murder.

Fans have turned to MC Daleste’s official Facebook and Twitter pages to express their grief. Billboard translated the message of one friend: “I hope God gives strength to the family, friends, and fans of my good friend MC Daleste, a guy who only wanted to convey joy to everyone through his music. It is a pity that the peace which we dream of, we often only get when we close our eyes.”

MC Daleste’s death preceded another horrific, tragic event in Brazil: On Sunday, 20-year-old Otávio Jordão da Silva, an amateur soccer referee, got into an argument with a player. Jordao da Silva fatally stabbed the player, but was then attacked by the crowd, which quartered and decapitated him.

“One crime never justifies another crime. Actions likes this do not collaborate with the legality of state law,” a police official said.