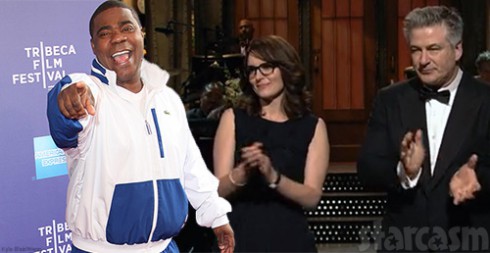 More than once, Sunday’s Saturday Night Live: 40th Anniversary Special was referred to as a reunion for former stars, hosts, performers, writers and crew members. Sadly, Tracy Morgan was unable to attend because he’s still recovering from the traumatic brain injury he suffered during a car crash in June.

In one of the more touching moments from the night, Tracy’s former 30 Rock co-stars Tina Fey and Alec Baldwin paid tribute to the eight-season SNL legend.

“I wish my friend Tracy Morgan was here tonight, and I know that he was hoping he would be well enough to be here too,” Tina said to the audience’s applause.

“Tracy would have been the first to accurately express how thrilled we all are to be a part of television history,” Alec added before launching into an impression of the comedian. Tina joined in on the fun by saying Tracy would likely express his deepest wish — to get everyone pregnant — if he was there.

Although Tracy’s condition has improved since the deadly collision last summer, his lawyer said in November that it’s unclear whether Tracy will ever fully recover from his severe brain injury.

“When you have a traumatic brain injury it takes a very long time to find out how you’re going to do and how much you’re going to recover,” attorney Benedict Morelli told the AP (via ABC News) three months ago. “You just don’t know. So that’s where he is. He’s still fighting and trying to live his life at the same time and trying to get better, and he’s just not better. We’re hoping and praying to get him back to where he was. But the jury’s out… He’s fighting to get better, and if there’s a chance for him to be back to the Tracy Morgan he once was, he’s going to try to do that.”

The following month, he was filmed getting around with a walker during an outing near his home. That appeared to be an improvement, as he was last pictured in a wheelchair in October.

Doctors who treat traumatic brain injuries such as Tracy’s say the road to recovery is generally long, but Tracy’s friends seem hopeful he will get there. As Alec concluded Sunday’s tribute, “See you at the 41st, Tracy!”

Johnny Depp loves watching Honey Boo Boo, and so do tons of other celebs