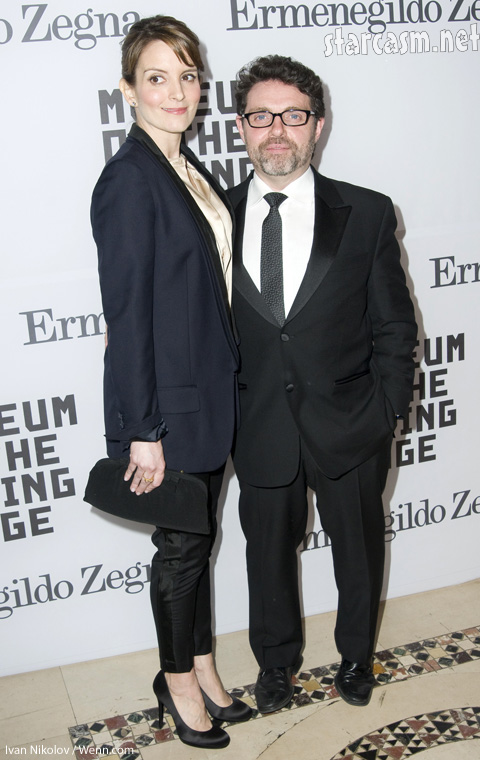 According to People, funny lady Tina Fey (40) announced (via a pre-taped Oprah show that will appear Tues, April 12, and confirmed by her rep) that she’s expecting her second baby with husband Jeff Richmond (51) .

Their first child, Alice Zenobia Richmond, is six years old. Tina’s husband Jeff is far less talked about than Tina, but he has a similar background. Jeff went through Chicago’s famous comedian rite-of-passage The Second City, and spent a good part of his career composing music for Saturday Night Live, where Tina had her start. Jeff now composes music and produces for 30 Rock.

Tina recently had an an excerpt from her book Bossypants published in The New Yorker that hilariously described the anxieties and pressures that a woman in the entertainment industry approaching her forties has to to both have children before her time runs out and be an amazing mother, and at the same time to take advantage of career opportunities that will also disappear with age (unless, as she accurately points out, you’re Betty White.)

Jane Krakowski, Tina’s co-star on 30 Rock, is also expecting a child, but she’s a few months farther along than Tina. Those babies might get some high-quality time socializing on the 30 Rock set. Lucky babies! They don’t have much time to socialize, though, because Alec Baldwin announced that the 30 Rock will call it quits in 2012, when his and Tina’s contracts end.

Tina will be on SNL again on May  7 for a reunion special. Bossypants is currently on sale. Buy your copy now at Amazon.

Kylie and Kendall Jenner are ‘at war’ over Tyga: ‘You’re the biggest f*cking b*tch I’ve ever met’