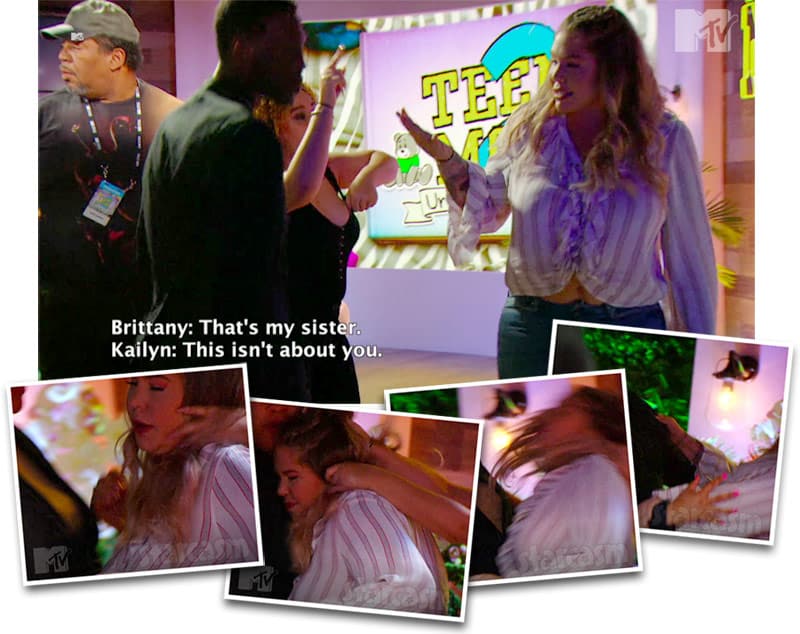 Another season, another CUH-RAY-ZAY drama-packed Teen Mom 2 Reunion! On Monday night’s “Behind the Screams” special, MTV showed us how all the Reunion drama played out backstage between rivals Briana DeJesus and Kail Lowry prior to the drama spilling out onto the stage when Brian misplaced her sh*t a bit during the “Unseen Moments” taping as she stormed on set screaming at Kail and had to be held back by security. Not being held back by security was Briana’s sister, Brittany DeJesus, who stalked Kail around the couches before grabbing Kail’s hair from behind and violently snatching her head back!

Here is a preview clip of the scene in which you can see Kail getting her “wig snatched” right at the very end:

And just in case it was hard to see, here is an animated gif capturing the moment:

Slow motion. The force rams kail’s head into the person in front of her. pic.twitter.com/doFIiHZWwi

That seems like some real deal, legally actionable behavior right there! I don’t think there has been any hint of any sort of legal action by Kail, but it certainly seems more justified than other situations where threats of lawsuits have been tossed about.

In addition to that preview clip, MTV also shared a video showing Brittany and Briana attempting to do their sit-down interview with Dr. Drew and Nessa in which Briana looks FURIOUS — like, “Hide yo kids, hide yo vase!” furious!

You just saw what happened behind the scenes, but here’s a look at what’s ahead on next week’s #TeenMom2 Reunion. ? pic.twitter.com/ak4tQxNZMC

In case you missed it, Briana would end up cutting her interview short before leaving New York to head back home to Florida. She said at the time that she had quit the show, but we gave that about a 0.003% chance of being true, and we stand by that.

Meanwhile, Briana, Kail, Brittany, and numerous other Teen Mom 2 cast members took to social media to offer up their reactions during and after the “Before the Screams” special.

I will start with Kail, who seemed to have A LOT to say about what went down as she insisted that she only texted to talk with Briana because multiple producers urged her to. “The producers encouraged me to text Briana to meet up prior to that scene with Chelsea,” Kail tweeted. “Came outta left field with the higher ups are asking if you would be willing to talk to her + added their own suggestions.”

Kail then revealed that it was the actions of her producer JC during the Reunion drama that caused her to switch producers before filming for Season 9. “This whole episode is a huge reason I fired JC. What they didn’t show,” Kail wrote. She later pointed out that security was holding her friend Bones back, and she says that was because of JC. (The Ashley’s Reality Roundup spilled more tea about Kail and JC parting ways.)

So what about Kail’s beef with Briana? She doubled down on her argument that Briana crossed the line when she started talking publicly about Kail’s children and Lux’s dad Chris, who is not on the show. “There’s a difference between talking about the person you have a problem with, and then extending it to their kids and significant others and family,” Kail tweeted. “I truthfully can’t remember a time I ever talked about her family,” she added.

Meanwhile, Briana was still feeling some kinda way it seems as her tweet ‘n’ deletes were a little more defensive. “Let me shed some light y’all,” she began her string of tweets. “This whole situation would of never happened if ppl minded their business on who I was f**king. Also I wasn’t scared. I popped off in front of cameras cause I was tired of things being done secretly and ppl playing the victim.” 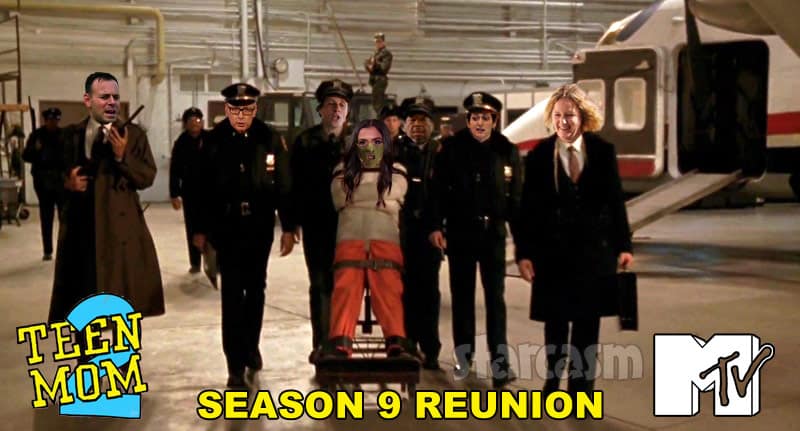 Briana then argues that Kail did talk negatively about her family, although it wasn’t publicly. “I saw plenty of msgs in Javi’s phone of a certain someone talking about me and my family. U can’t point fingers if ur hands are just as dirty.”

I don’t think Kail has ever expected Briana not to talk badly about her family to others in private, it was her public statements on social media that she had an issue with. To be honest, I just assumed that Kail had also said negative things about Briana’s family (not so much her kids or their dads), but it has been forever since the episode in terms of internet sleuth years, and I haven’t seen any screen capped old tweets or anything else pop up online.

Back to the Reunion drama… Kail responded to an older screen capped tweet made by Briana when the previous Reunion aired to explain the “same energy” comment: 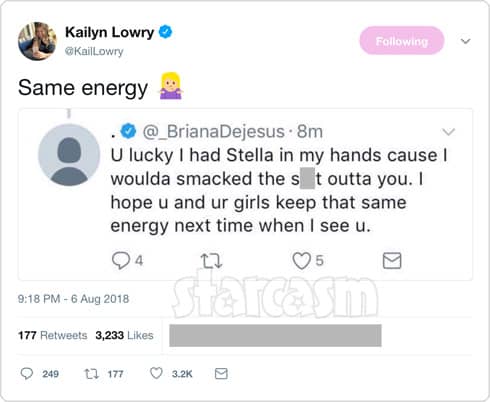 Briana’s sister Brittany, who has been shown more than once confronting Briana about the bad timing of her overreaction, took to Twitter to explain her own actions:

Say or think what you want but at the end of the day I would do anything to defend my family and friends… point blank idc ??‍♀️ It’s not my proudest moment but at the same time my ass wasn’t gonna just sit there and scream “WORLD STARRRRR!!!”

Some of Kail and Briana’s Teen Mom 2 co-stars also reacted to the episode on social media, including Chelsea DeBoer, who was furious that she was put in that position despite expressing her concerns for her safety and the safety of her unborn child. Here are some of her tweets from Monday night:

I already watched tonight’s episode earlier and it made me feel so sick to my stomach that I was even around any type of physical altercation while pregnant. Unfortunately, I put too much trust into people that I thought were looking out for my best interest and safety.

Looking back…I wish I would’ve listened to my gut feeling and not have gone to filming that day at all.

Yes! That’s why I was so upset..I had voiced concerns and honestly was just like “look, go ahead and get your drama or whatever you’re wanting but please just let me know so I can not be in the middle of it right now”

Hey I don’t even care if it IS dramatic. When it comes to anything that has to do with my babes…in or outside my belly. You’re damn straight I’m gonna be dramatic AF

The fact that @mtv higher ups said they would not let happen exactly what did happen, knowing Aubree was watching in green room was ridiculous. I had to jump in front of monitor and block Aub's view and hit the mute @teenmom #teenmom2

At some point, I expect Maury to come out and announce who someone's father is @mtv #teenmom2 @teenmom

Exactly what @ChelseaHouska predicted would happen and @mtv promised would not happened. There should have been severe consequences #teenmom2 @teenmom

Chels can continue to film and do her best to be a good role model. Just won't partake in any chance of reunion drama again. It is OK to have a breather between crazy drama scenes @mtv @teenmom #teenmom2

I was chill and just sat there… I’m not letting two jump anyone. Not happening, but It was a mess a lot of a messss. #bye #letsmoveon ??✌?

I will wrap up this “Behind the Screams” aftermath recap on a lighter note, paying homage to the real hero from the episode:

I'd like to point out the true hero from the #TeenMom2 Reunion: THIS GUY, who not only managed to catch flying art thrown by Briana, but who also looks to have saved a shoe. #CaptainSaveAShoe #TheMonumentMan Dude's probably still losing sleep because he couldn't save that vase. pic.twitter.com/ssllwTpmhG