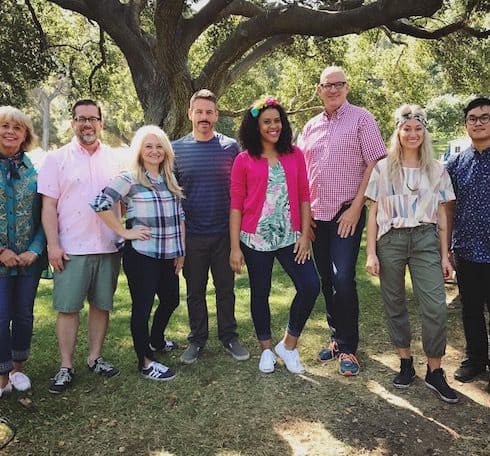 If you didn’t catch the series premiere of NBC’s Making It last week, do yourself a huge favor and stream it here. Any show hosted by Nick Offerman and Amy Poehler is basically bound to be a delight, but Making It sweetens the bargain by essentially making an American version of The Great British Baking Show — except, instead of baked goods, the contestants all make crafts.

OK — there is one other tiny difference. Where the winner of their British counterpart takes home “a bunch of flowers and a cake stand,” as former contestant Martha Collison once put it, the last member of the Making It cast left standing walks away with a $100,000 grand prize.

But the show is not your typical reality TV race to be the first backstabber. There’s a genuine camaraderie between members of the Making It cast, all of whom seem more dedicated to craftsmanship (and, by extension, cheering their fellow contestants on) than to the prize money itself.

In that same spirit, here’s an alphabetical rundown of the cast of NBC’s Making It for Season 1. In addition to your basic biographical info, we’ve found an unusual or otherwise interesting fact about each person, along with a complete rundown of social media and professional links for all your following and purchasing needs. 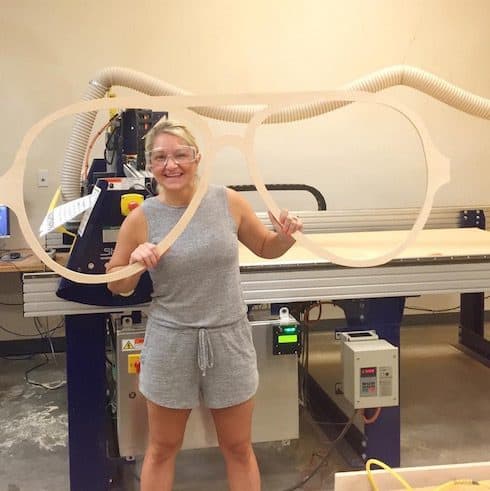 37-year-old Joanna Gick is an Ohioan by birth, an Arizona native, a mother of two, and the co-owner of J&J Design Group. Joanna and her partner’s work designing children’s rooms have been featured in publications like Better Homes & Gardens, Fit Pregnancy, and HGTV Magazine, among many others.

What you need to know about her: Joanna’s crafting pedigree goes back many a year. She explained that her parents trusted her with a hot glue gun from an especially young age: “My mom would take me to craft stores,” Joanna told Martha Stewart, “and my dad would give me a pile of two by fours and some nails and hammer and I would just make things. My parents really nurtured that creativity in me.”

Where you can find her: You can follow Joanna on Instagram here, or browse her work with J&J Design here. 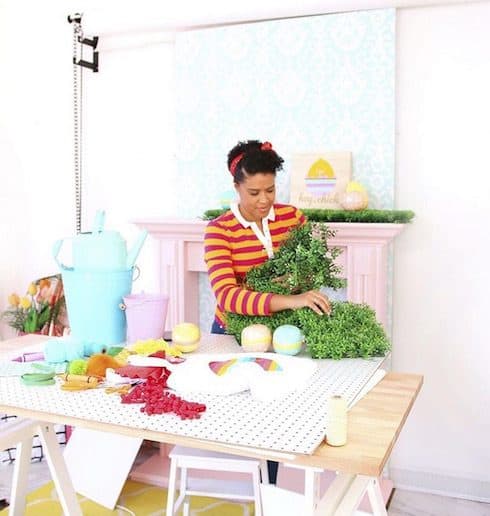 Amber, also 37, found her crafting journey highlighted during the Making It premiere episode. She has graduate degrees in clinical psychology, but, years ago, decided to leave that career behind and focus on crafting and blogging, where Amber’s passions lay. Amber lives in Miami with her husband and their son.

What you need to know about her: Amber almost didn’t even apply to be on Making It — and then, as she was filling out the application, she was contacted by one of the show’s producers, who wanted to recruit her based on her reputation alone.

“Before I could complete and submit the application,” Amber told BSC Kids, “I received a call from a casting producer who’d gotten my name through the grapevine! I guess the universe had bigger plans for me!”

Where you can find her: You can follow Amber on Instagram here and on Twitter here. Damask Love, the blog that made her famous before Making It amplified the effect, resides here. 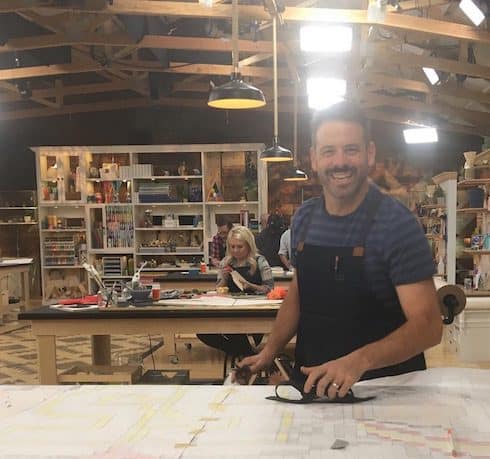 Billy Kheel, 43, has led something of a journeyman’s life. He was raised in Massachusetts, attended Wesleyan University (further entwining his passions for athletics and art), did the mandatory artist’s stint in New York, and now lives in Los Angeles, where he is currently a visiting art teacher.

What you need to know about him: Per LA Parent, Billy has already seen some of what he learned on Making It show up in his work. “I’ve learned I can get a lot more done in a small window of time,” he said, adding that “the show pushed me to learn new mediums and craft techniques.”

Billy also confirmed that the Making It cast stayed tight well after filming was complete. “I was afraid it would be cutthroat and we’d be stabbing each other with glue sticks. But it was a lot of fun, and I’ve stayed in touch with them.”

Where you can find him: Follow Billy on Instagram here; check out his official Etsy shop here. 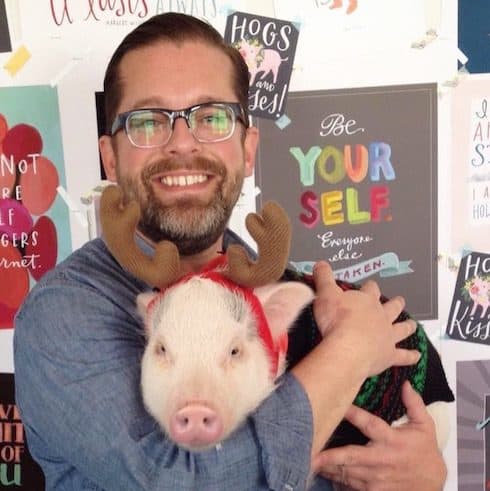 Robert, the second of three Making It cast members to have grown up in the Midwest, has been a citizen of Los Angeles for a quarter-century. His background is in art history and studio arts, including a thirteen-year stint as an art appraiser. And he is prepared should pottery come into play during his time on the show.

What you need to know about him:Robert credits his unorthodox education with helping to nurture some of his crafty drive. “When we were studying Greco Roman history in history class,” he told Grand Rapids magazine, “we were reading The Iliad in literature and then throwing Greco Roman pots in art class….I think that really solidified my love of not only the fine arts but also the craft and maker side of things as well.” 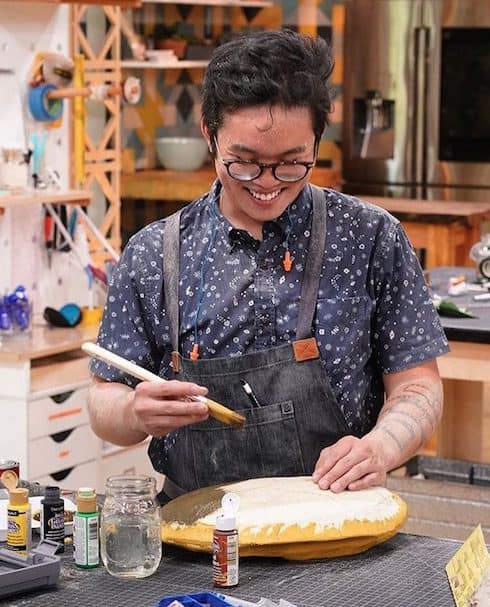 28-year-old Khiem Nguyen is the youngest of the Making It contestants this season, though he’s certainly not lacking in experience. Indeed, such was his energy during his time in art school that Khiem had to craft his own “open major,” the better for him to “get his hands in everything.” Khiem and his fiancé own and operate AK Wood and Design out of Austin.

What you need to know about him:He knows how to take defeats in stride — like water off a turtle’s back, you might even say. Per the Austin Chronicle, here’s how Khiem responded to the comparatively harsh judging he received following last week’s secret beast challenge:

For me it was funny. When I thought of the turtle shell, the turtle wasn’t part of it at all. From the beginning, I thought, I just want to do a shell because the turtle carries the shell on its back, and I’ve moved a lot, and every time there are certain things I move with me to each apartment or house, and the shell is just that symbolism, not the turtle itself. I guess I would be the turtle that’s making the shell. It was funny, and it was one Faster Craft challenges, so I didn’t take it too personally.

Where you can find him: Here’s Khiem’s Instagram page, and here’s the official page for AK Wood & Design. 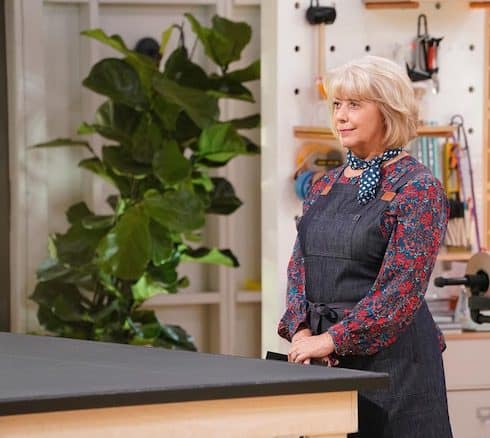 Jemma Olson, the first member of the Making It cast to be eliminated from the competition, had plenty of good cheer awaiting her upon her return to Rockwall, Texas. Jemma is a mother of eight, a grandmother of sixteen, and a crafter who carries on the tradition of her parents and grandparents craft-by-necessity ethos.

What you need to know about her:Jemma became intrigued by the show when she found out the producers were specifically looking to cast an older participant. “I had gone to Puerto Rico to visit my daughter and her family,” she told the Rockwell Herald-Banner. “I came home feeling ignited by the rich culture I experienced there, and when someone in a Facebook group for craft bloggers said a show is looking for a ‘crafting grandma,’ I got interested and went from there!”

Where you can find her: Jemma’s official Instagram page is here; discover At Home With Jemma, her blog of whimsy, here. 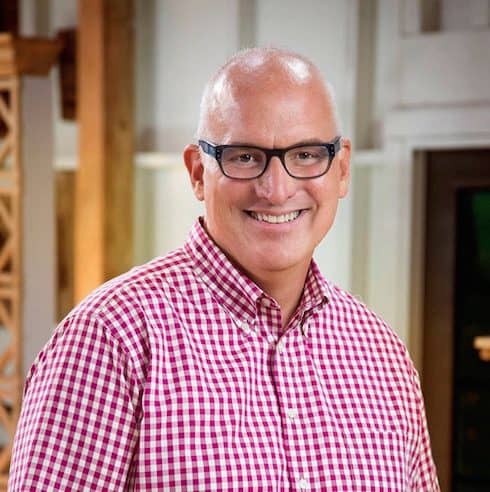 Jeffery “Jeff” Rudell, the Making It cast’s third Midwesterner, won the audience’s hearts when he revealed in the premiere episode that he had no heirlooms to use for his challenge because his family had disowned him upon learning of their son’s homosexuality when Jeff was 18. It was a moment of extraordinary vulnerability for Jeff, who’s long made a name for himself with the handmade paper props he crafts for high-profile clients like the New York Botanical Garden and Tiffany & Co., amond others.

What you need to know about him: Making It is actually Jeff Rudell’s second go-round on a reality TV show: he was also a member of the cast for The Apprentice: Martha Stewart back in 2005. As you might expect, the two shows couldn’t have been more different — something Jeff explained for the Windy City Times.

“It’s a very satisfying thing, and crafts in general…The craft community is often a welcome and generous community.” Jeff said. “It was hard, but it was a blast—really challenging and exciting.” 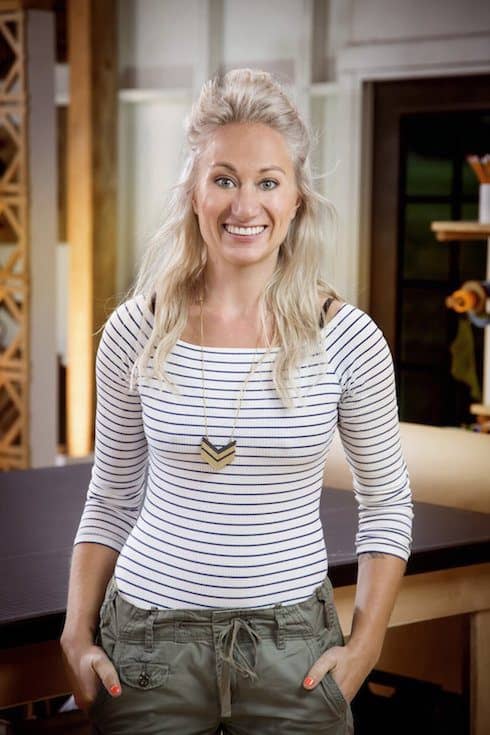 San Franciscan Nicole Sweeney is also no stranger to audiences: in addition to her education in architecture, she has a background in dance. Nor is she a stranger to bold, borderline audacious personal moves: shortly after filming the inaugural season of Making It, she quit her job as a display coordinator at Anthropologie to work as an artist full-time. Nicole lives in Cole Valley, San Francisco’s smallest neighborhood, with her husband and their cats. But the cramped city has hardly held back Nicole’s woodworking ambition — she has a woodshop in her apartment, where the dining room used to be.

What you need to know about her: Sweeney told the Burlington Free Press that she merged from her tenure on Making It feeling even more confident than she had before, and with a brand-new goal for herself.

“One of my missions now is to empower little girls to use power tools more,” Nicole said. “What this show did is it gave me a voice that I can really stand behind and a confidence in what I do. I’m not the best woodworker in the world, I’m not the best anything in the world, but that doesn’t mean that my story doesn’t deserve to be told or that the work I do isn’t important. You don’t need to be the best in anything, but the process of actually making things still deserves to be celebrated.”

Where you can find her: On Instagram, of course. And on her own web site.

In between checking out the cast members’ photographs and beautiful wares, remember that Making It airs Tuesday nights at 10 on NBC.