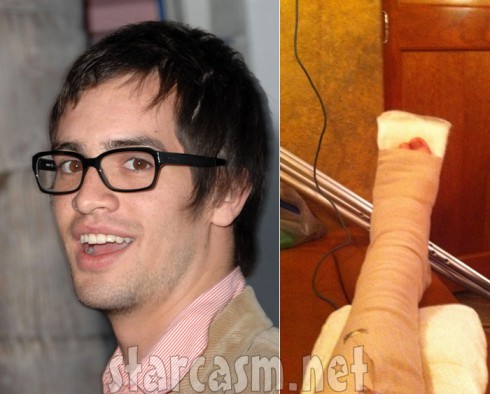 One thing that could certainly cause panic at the disco would be to break your ankle in a gruesome fashion. Luckily for fans of the band Panic! At The Disco a softball sized broken ankle didn’t prevent lead singer Brendon Urie from finishing his set at a tour stop in Florida over the weekend.

Thanks to everybody and their brother owning a high quality phone that takes video this did not go unrecorded. Actually I don’t have the moment of breakitude but I do have the wicked reveal by Brendon as he removes his sock to give the fans a glimpse of the painful situation he was in. Check it out!

If you weren’t able to catch the video here’s what Brendon had to say about his poor poor ankle followed by a screen grab:

{Gasps from the crowd after he shows them his ankle} What does that mean?  There’s like a softball in my ankle! My left leg is done for the show, if you don’t mind … the show will go on if you’ll have us. Oh, it’s gross people. You’re lucky to be in the back it’s pretty nasty but I got to let it breathe. It looks like my grandmother’s goiter (a swelling of the thyroid gland). Disgusting.”

I love the look on the guitarist Ian Crawford’s face when he leans over to check it out:

Man he was right, that is GROSS!  Kudos to Urie for finishing the show on one good leg.  The top right image was one that Brendon tweeted after the show.  Rock’ and Roll’!

Lady Gaga’s “You and I” single cover features male alter-ego Jo Calderone; who’s totally in love with her