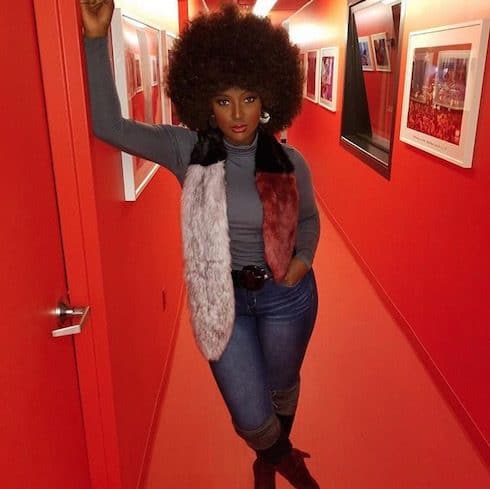 Love and Hip Hop Miami co-stars Amara La Negra and Young Hollywood stole the series premiere spotlight with a jaw-dropping, racially charged exchange. After the episode aired, the pair took to social media to rally fans — but it looks like one side has the bulk of the audience’s support.

In the build-up to the episode, Amara had been outspoken in her desire to both cross over from Spanish- to English-language audiences and to represent for all the Afro-Latina women who look like her. She had also detailed some of the racism and cultural ignorance she’s faced over the past few years in the entertainment industry, including accusations that her hair, skin, and overall appearance are manufactured to make her look darker than she is. (Click here to see Amara’s response to those accusations.)

In the Love & Hip Hop Miami premiere, Amara met with fellow cast member Young Hollywood to talk about her crossover dreams. She hoped he’d be able to offer some advice on how to cultivate her image; unfortunately, as BET put it, the man turned out to be “just another wannabe image consultant who aimed to change her to match the “mold” of the performer he thought to be more marketable.”

Following that, Young Hollywood took to social media to thank fans for tuning in, and only said “Don’t be so quick to judge” in his defense:

But Young Hollywood did call Amara a “Nutella Queen” during a live event shortly thereafter. Which Amara was quick to share on her own Instagram page — and to ask, quite simply, what her followers thought of the joke:

Hey Guys! I Just Saw #YoungHollywood Live! What do you Think of His “Nutella Queen” Joke? Do You guys Think its funny ?! #LHHMIA #LHHMIAMI

Elsewhere on social media, Amara’s Twitter feed was overrun with support from fans new and old. Which probably made it a lot easier for her to stick to the high road:

For so many years i felt alone fighting to be understood by many and never in a thousand years would i have imagine to have soo much support! Omg! Im about to cry! Thank yoh guys soooo much!

And speaking of that fan support, here’s just a sampling of the dragging Young Hollywood’s reputation has gone through in the hours since the Love & Hip Hop Miami premiere:

Let this conversation between Young Hollywood and Amara La Negra be a CLEAR EXAMPLE of why so many women of color don’t succeed as much just because of their skin tone #LHHMIA pic.twitter.com/mRQX4iWneK

Young Hollywood is ugly and racist throw the whole person away #LHHMIA pic.twitter.com/XoDuURA1dS

LORD that #LHHMIAMI Afro-Latina scene between Amara and Young Hollywood. I can’t even unpack the amount of racism, colorism, eurocentrism and just down right ignorance that just unfolded in 3 minutes. ??‍♀️ this is why I rarely watch tv.

Young Hollywood made it seem like Amara La Negra having an Afro and dark skin was too “intense and aggressive,” and then when Amara responded be called her crazy. How he treated her exactly how Black ppl are treated like in white spaces. #LHHMIA

Young Hollywood's ignorant comments about Afro-Latinas got me in my feelings. He would've caught hands immediately, but Amara kept it classier than I would've #LHHMIA pic.twitter.com/6gvbxTbz3N

Young Hollywood: "You can't be elegant if you have an afro."

Me, when Amara said f*ck you to Young Hollywood … #LHHMIA pic.twitter.com/kDebc02fqv

"A little more Beyonce. A little less Macy Gray." Young Hollywood is dumb and ignorant as shit. And FYI, Beyonce rocked an Afro for a while. #LHHMIA

I really can’t believe that Young Hollywood disrespected Amara solely for loving herself, the skin she’s in and her Afro. He even did ✊?this like being proud of your heritage isn’t ok. Telling her she’s not elegant but you have face jailhouse tattoos ? #LHHMIA pic.twitter.com/LwholgtcbX

What is Louis CK doing?

All About the “All About That Bass” controversy