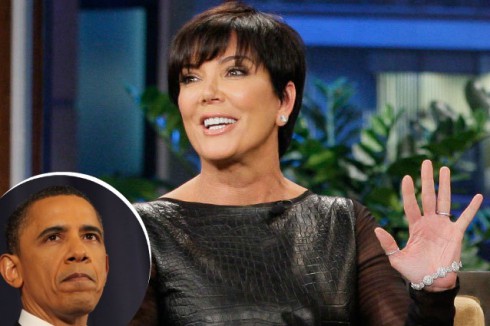 Kris Jenner must be really busy with her poorly rated talk show, because she apparently just got word that President Obama made some harsh comments about Kim Kardashian and Kanye West during an interview with Amazon last month.

“There was not that window into the lifestyles of the rich and famous,” Obama said of the American Dream of yesteryear. “Kids weren’t monitoring every day what Kim Kardashian was wearing, or where Kanye West was going on vacation, and thinking that somehow that was the mark of success.”

The matriarch of the Kardasian-Jenner bunch used her platform to respond to President Obama’s critique. All we needed was Bob Schieffer and it would have made for a great (albeit very slow-paced) debate!

Only two minutes of the five-minute-long clip were aired on The Kris Jenner Show. Her producers said it was in the interest of time, not because of what Kris had to say. Here’s the full, unedited clip…

Here are the key points…

I wasn’t aware that you could only set the bar so high and that we could only dream so big. I was taught, Dream big, work hard, and you could have whatever you wanted.

I bet the President has some friends with 10,000 square foot houses and that you wouldn’t mind going over there, Mr. President, while you were asking them to have a party for you when you were campaigning for dollars to run for president.

As could be expected, Kris’ comments were primarily negatively received. Even self-admitted fans of the Kardashians said Kris was pushing it by calling Kim “the hardest-working young lady in the world.” Others said Kris missed the point of Obama’s statements by making it about her family rather than the greater issues he was alluding to.

Then again, Kris is one protective mother hen — so it’s only natural she’d rush to her daughter’s defense while standing on her very large soap box.

Still, I can’t help but wonder whether it’s a coincidence that successful talk show hosts Oprah and Ellen DeGeneres don’t have kids. Can you imagine one of them trying to resolve their child’s playground arguments on national television? (Granted President Obama would make for one big playground bully.)

Weigh in by telling us whether you think Kris’ comments were called for or out of line.