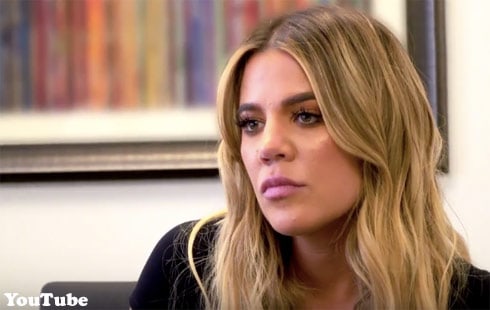 Khloe Kardashian has revealed that she pretended to try to get pregnant with her troubled ex-husband Lamar Odom.

The most recent teaser for the season finale of Keeping Up with the Kardashians catches up with Khloe as she gets a checkup to see if she’s a viable candidate to be a surrogate for her sister, Kim Kardashian.

As we revealed in our update on rumors of Khloe being pregnant with her current baller boyfirend Tristan Thompson, Khloe’s trip took an unexpected turn when a fertility doctor informed her that she has “fewer follicles” than he anticipated for a 32-year-old.

During the doctor’s background questions, Khloe was asked if she’d tried to get pregnant before. She answered, “Yes, but I fake-tried. I was married, but I knew the circumstances weren’t the healthiest so I just kept pretending I was doing it.”

In a separate narration Khloe explained her deceit in greater detail:

When I was doing my fertility treatments, they were more so for Lamar. I had to stop because there was much deeper stuff that was happening in our marriage… I knew it wasn’t the right situation to bring a child into and I think I’ve done  a lot of covering up for him. But I was fine taking on that burden on my shoulders, because he had a lot of other deeper s**t to deal with.

The season finale of Keeping Up with the Kardashians will air Sunday at 9 p.m. ET on E!.