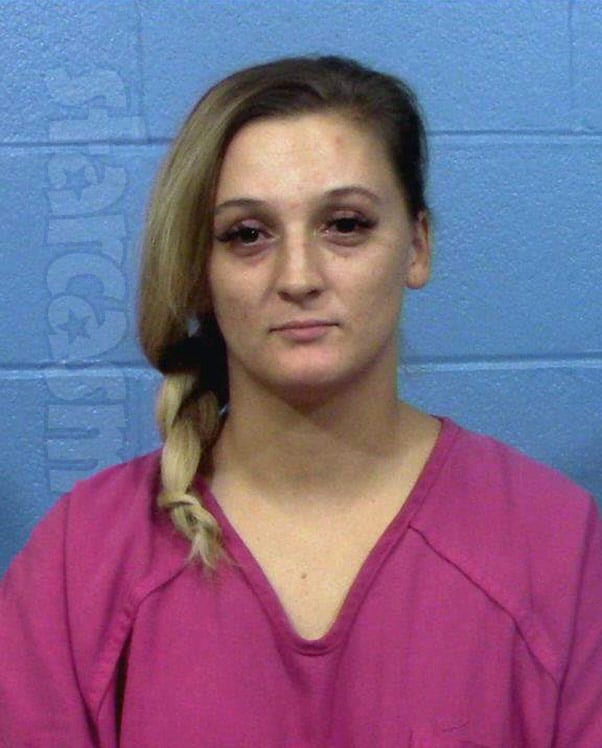 Teen Mom OG star Tyler Baltierra’s sister Amber Baltierra was arrested in Texas over the weekend and charged with assault. The 32-year-old mother of two took to Instagram Live Tuesday night and revealed that the arrest was after an altercation she had with an ex-boyfriend.

In the video, Amber revealed that she and her boyfriend broke up recently, and that the split was amicable. However, Amber had just found out that he had been cheating on her often during their relationship.

The news caused Amber to get a little irate, and she decided to head over to her ex’s place to return some of his stuff and confront him about it. He replied to her texts by revealing he was a couple hours away in Dallas, but was heading back home.

As Amber was waiting for him to get back to town, she changed her mind and decided to avoid a confrontation by heading on over to his place and returning his things before he got back. On her way over to his place, she said he continued to message her and was trying to talk her into potentially getting back together. Amber seemed to suggest that the sweet talking was working a bit.

Any chance of a potential reconciliation was shattered when Amber arrived at her ex’s place and saw a woman leaving.

Amber says she got very angry and was “shaking” and “just about to puke.”

“I lost it,” she said. “Me and him got into a fight.” Amber said that during their altercation she scratched his forehead enough to cause it to bleed.

Police were called, and because there was an injury, Texas law mandated that Amber be arrested. 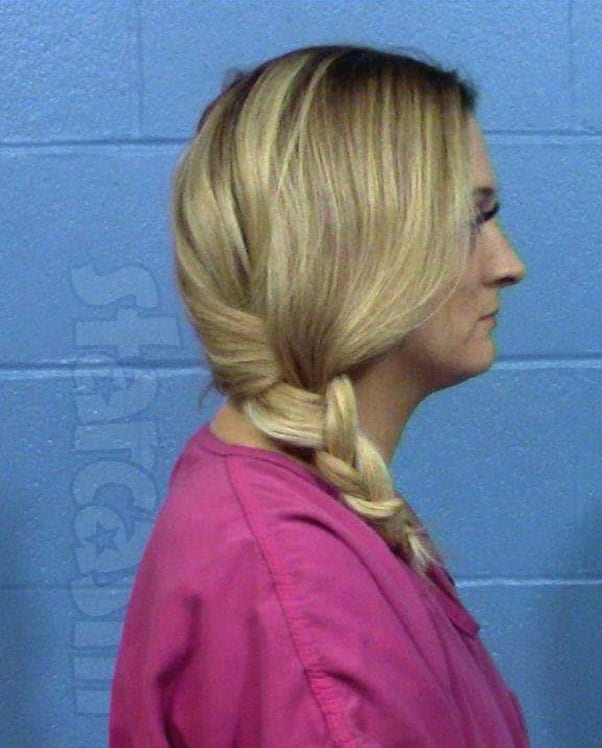 Amber was booked into Williamson County Jail on Sunday, and was released the following day after posting a $1,500 bond — as first reported by The Ashley. She has been charged with assault causing bodily injury, and because she and the alleged victim used to date, the assault charge received the “family violence” classification.

The day Amber was released, she posted an Instagram video that seemed to be referencing her arrest and the actions leading up to it. “I went off my rocker a little bit lately, and as long as I keep a relationship with the guy in the sky that keeps me from getting high, I can make it. I can make it. So guess what?” Amber then showed off her 18 month sobriety chip.

After kissing the chip, making weird noises, and chanting “I got my 18 months chip,” Amber continued to preach positivity. “Your girl’s making it. And your girl can make it. Because you want to know what? Can’t nobody get me down. And I mean can’t NO-BODY! Nuttin’ gonna break me. Nuttin! Have a good night.”

One of the people that can’t get Amber down is a woman named Gena, who Amber describes as “my kids’ father’s baby momma.” To provide a little background info on Gena, she has been helping take care of Amber’s 10- and 11-year-old son and daughter while Amber has been in Texas for the past year and a half.

In her Instagram Live video, Amber stated that Gena was “obsessed” with her and had told Amber’s kids their mom was in jail. Gena responded by sending Amber some irate text messages denying both claims. Amber then posted the text messages and put Gena on blast in the caption and comments.

Here is the first batch of texts that Amber posted, followed by her caption and comments: 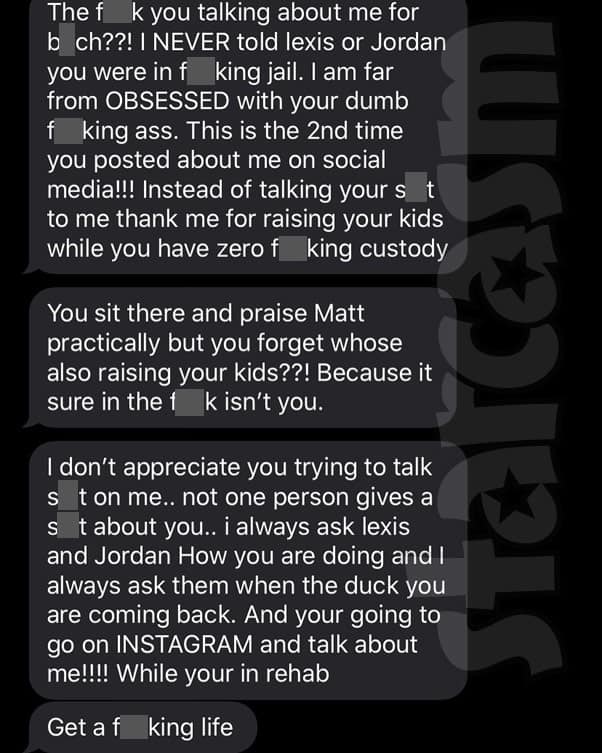 AMBER’S CAPTION: This is what I get after posting on here about how she’s obsessed with me ? she doesn’t even live in the same house as my children and I have thanked her more than enough times for what she has done for my children. They are 11 and 12. Does everyone forget who raised them the first 10 years like ??‍♀️ and if this is the person who is “raising” my kids well then… all I’m gonna say is no wonder my kids complain about her all the time and how nasty and mean she is to them. Like look how she talks. But she’s a grown ass woman who is so much better right? She should be focusing on getting a house for her three kids and how to act right so Matt don’t break up with her every other month but no she’s worried about teen mom hate groups and social media! She took care of my kids last school year YES. I have talked to her face to face about how thankful I am for that! That’s all this woman has on me is throwing my kids in my face. She can’t even handle her own children let alone mine. I’m just so over these raging ignorant texts she sends. I don’t even respond honestly. It’s just time to start showing everyone the real her. You should see the texts she sends my daughter ? okay end rant! Oh no she just text me again ?

COMMENT: Just think about how your kids would feel if they stumbled on these posts, from either side.

AMBER: They already know. They wanted me to blast her years ago. I promise you.

COMMENT: Really unfortunate that your kids are seeing all of this as well. Should just keep all of this off social media and show your children how to be the bigger person.

AMBER: She send my kids worse sh*t. Like I’m always the one telling my kids to respect her be nice to her. MY BABIES KNOW IM THE BIGGER PERSON AND ALWAYS HAVE BEEN. I promise you this isn’t doing any damage. My kids are gonna be like it’s about time mom blasted Gena. They always tell me how she talks so bad about me and I tell them. That’s her actions not yours. Rise above that and treat her with respect still. They get mad at me when I say that but it’s true.

#TeenMom Tyler Baltierra's sister Amber and husband Billy have split after she reportedly documented her extramarital fling on Snapchat while Billy was stuck at home under house arrest: https://t.co/zFbaCxxMXi

COMMENT: I hear you but also… you say “look at how she speaks” girl, you are doing the EXACT same thing as her… maybe try and be bigger and better. If she raised your kids for one year, two or even 10 whatever. She helped you out. I obviously do not know the entirety of this but this seems like you are going backwards in your sobriety instead of forwards. Think of your kids in the sense that they do NOT need to know adult situations. Deal with yourself and privately. Social media has no business for this intense, tough subject. Period.

AMBER: There is only so much I can take dude. Nobody is perfect and yes I fall off my rocker a bit but I get right back up and stand stronger. I knew posting this that there were gonna be people who said things like this. What others have to say doesn’t affect how I view myself thou ya know. That’s my point I told her many times how much I appreciate her.. it’s not okay to come at me the way she does thou. That’s my point ya know

Amber later uploaded a second image with a couple more messages from Gena and captioned it by writing “I guess I had a lot to say ??‍♀️” Here’s the picture: 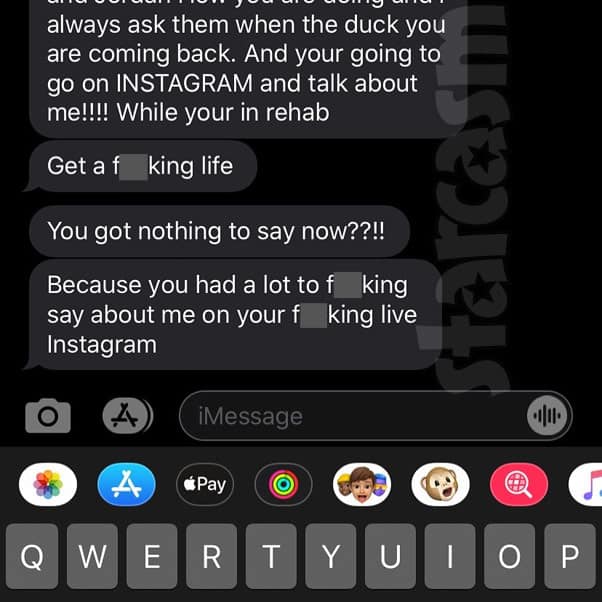 Getting back to Amber’s arrest, she claimed during her live video that her ex is not pressing charges. That will certainly make things a little more difficult for prosecutors to move forward. There doesn’t appear to be any information about Amber’s case in the court dockets yet, so we do not know when her next scheduled court date will be.