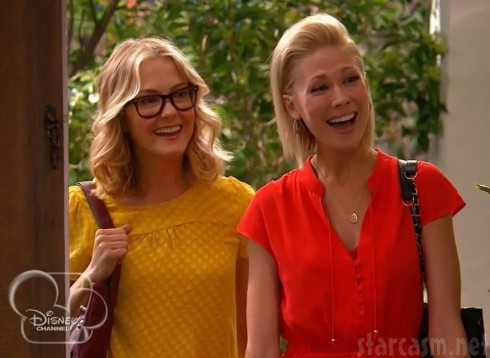 The two moms, Susan and Cheryl were introduced in typical Disney style: With a comedic bit between two confused parents.

“I met the mom, Susan. She’s really nice,” said Amy, a main character on the show, while explaining her daughter’s friend, Taylor, was coming over for a playdate and was getting dropped off by her parents.

“Oh, I met her. I thought her name was Cheryl,” responded Bob.

Then the doorbell rang, Amy and Bob realized their mistake and invited Susan (Desi Lydic) and Cheryl (Lilli Birdsell) into their home without hesitation.

Disney Channel’s inclusion a same-sex couple was immediately hailed by many. Still, others publicly vowed not to watch the network again.

“Disney decided to be politically correct versus providing family-friendly programming,” said a representative for One Million Moms, a watchdog group. “Families will not allow Disney Channel in their homes if they must protest the network veering away from family-friendly entertainment.”

A spokesperson for the Disney Channel addressed those concerns when casting was announced in June 2013, saying, “This particular storyline was developed under the consultancy of child development experts and community advisors. Like all Disney Channel programming, it was developed to be relevant to kids and families around the world and to reflect themes of diversity and inclusiveness.”

Regardless of whether the general public is for or against the introduction of gay characters, it seems Susan and Cheryl’s appearance was a one-time deal: The series finale of Good Luck Charlie airs in February.

Kayli the dancing baby will be your favorite thing this week