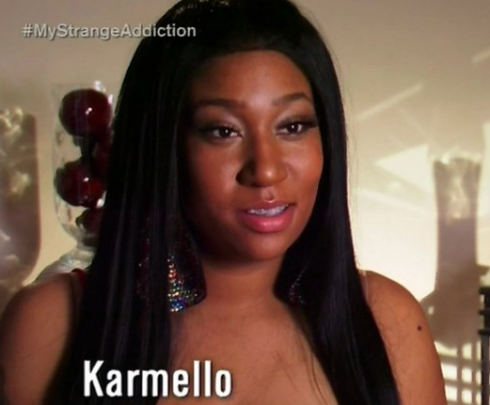 Last night TLC aired a two new episodes of their addicting show My Strange Addiction. The first episode introduced us to a woman who liked to lick her cat and eat its hair, and Mike a Trina, a couple who share an obsession with coffee enemas.

The second episode featured a man who was obsessed with inflatable pool toys, and Karmella, 23-year-old mom with a 4-year-old son who’s had over two liters of non-medical grade silicon injected (54 separate injection sessions) into her butt over the past three years.

Karmella meets the woman who injects her butt in hotel rooms and other rotating places, and although the lady tells Karmella it’s liquid silicon that’s going into her body, Karmella says she doesn’t know for sure.

“The woman who does give injections, I don’t know what her background is like. We meet different places, sometimes in a hotel room. She keeps that liquid in a big bowl. The woman says it’s liquid silicon, but I don’t know for sure.”

Even with all of these unknown factors and shady conditions, Karmella is happy with the results.

“Before the injections I was a size four, and now I’m a size ten,” she says. “I am happier because I’ve never had a butt, it’s nice and firm, and up how I want it to be up.”

“I pick up more attention than before as far as commenting on my butt. It definitely steps up my confidence.”

Blackmarket injections can involve unregulated silicon that can contain metal lubricant and cement with can be extremely dangerous, and the dangers don’t always present themselves right away. April Brown has been a very vocal advocate against illegal butt injections after she lost all four of her limbs and her buttocks due to complications from the unregulated practice.

In 2012 Oneal Morris, a woman who injected herself and others with not only silicon she got from Home Depot, but also Fix-a-Flat, superglue and cement, was arrested on manslaughter charges after someone she injected died. She had previously been arrested in 2011 for “practicing medicine without a license.”

Karmella even has a friend, Vanity Wonder, who was also addicted to bottom injections until she nearly died from an infection brought on by the shots. 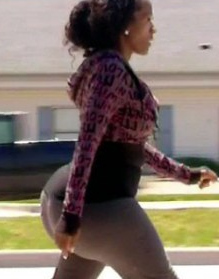 Vanity pointed out that “no one ever thinks it’s that serious until something bad happens. Every time you go get injected you roll that dice to see if you’re one of the ones that is gonna get sick and die.”

Karmello went to the see the doctor, who of course advised that she never get another injection. She told him that she didn’t think she’d go back, and that she hopes she “can learn one day to love my body and love myself a little bit more.” She said she wants to change so she can be healthy and alive for her son.

Mischa Barton opens up about her “terrifying” breakdown