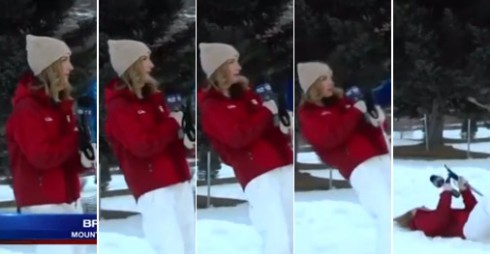 Brooke Graham of KUTV showed the kind of dedication that would make Ron Burgundy proud in a video that is going seriously viral.

The Salt Lake City area reporter was doing a live segment on cross-country skiing when she quickly got tipsy and passed out cold, landing with an audible thud in the snow. KUTV shared the clip via YouTube with the following description:

*Note* KUTV Reporter Brooke Graham works six days a week and is one of our hardest workers. She is doing fine following this instance and has given us permission to post the video on her behalf.

Brooke has her own blog and addressed the issue with a great sense of humor about the whole thing, letting viewers and fans know that she’s okay.

A lot of people have expressed concern and well wishes and I really appreciate it. However, this is not the first time I have passed out cold. I am known to faint any time I am in high altitudes and get too cold. (so does my twin sister Britt) So this week I plan to go get checked out by a doctor and get to the bottom of it. In the meantime, we can all laugh at the craziness of the situation! I have laughed many times watching this video so don’t feel bad if it makes you giggle. I feel like someone should dub Keisha “Timber” over it and play the fall in slow motion.

Since Brooke has given permission, here’s a GIF of the “TIMBER!”

She added that she was unaware how long she had been out but since the camera was pointed at her she “decided to keep on talking.”

Brooke even kept it light via Twitter as she’s shared all the attention she’s been getting from her fall.

If you want your phone to be ringing straight for 72 hours just pass out on live TV.