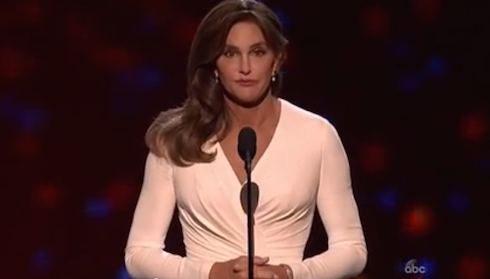 Caitlyn Jenner accepted the Arthur Ashe Award for Courage at last night’s ESPY Awards, and the Caitlyn Jenner ESPY Awards speech is already drawing praise because of its powerful, direct appeal for people to accept transgendered people as they are.

“My plea to you tonight,” Caitlyn said, early in the speech, “is to join me in making this one of your issues as well. How do we start? We start with education. I was fortunate to meet Arthur Ashe a few times and I know how important education was to him. Learn as much as you can about another person to understand them better.”

Caitlyn made sure to thank those who had come before her, saying

There have been so who have traveled this road before me. From, in sports, Renée Richards, to Chaz Bono, to Laverne Cox, and many others. Janet Mock is here tonight. And I want to thank them all publicly, and the ESPYs, and the late Arthur Ashe, for giving me this platform to start the next phase of my journey. I also want to acknowledge all the young trans athletes who are out there — given the chance to play sports as who they really are.

She also concluded the speech with a motion toward togetherness and a nod at the ongoing expansion of transgender rights:

So for the people out there wondering what this is all about — whether it’s about courage or controversy or publicity — well, I’ll tell you what it’s all about. It’s about what happens from here. It’s not just about one person, it’s about thousands of people. It’s not just about me, it’s about all of us accepting one another. We’re all different. That’s not a bad thing, that’s a good thing and while it may not be easy to get past the things you always don’t understand, I want to prove that it is absolutely possible if we only do it together.

What are fellow athletes and celebrities saying? Reaction on Twitter seems to be trending toward the positive:

Just caught @Caitlyn_Jenner‘s speech at the #ESPYS. So deeply moved. I feel like an historic moment happened for my community tonight. Thanx

Respect to @Caitlyn_Jenner. Beautiful, moving, inspiring speech tonight at the #Espys. We are a better people because of your courage.

#ESPYS I don’t care what you think of Caitlyn Jenner, you must admit she did a great job tonight on ESPYs.

Just blown away by @Caitlyn_Jenner and her powerful speech at the #ESPYS What a women, what a hero. #bethechange

The selection of Caitlyn Jenner for the Courage Award was not without initial controversy, as critics derided the choice of Jenner over other less prominent but more recent athletes. Jenner’s best-known athletic achievement is winning the gold medal for the decathlon at the 1976 Olympics.

Caitlyn Jenner’s first blog on transgender issues: Am I doing it right?

Caitlyn Jenner on Kris Jenner marriage: I got mistreated