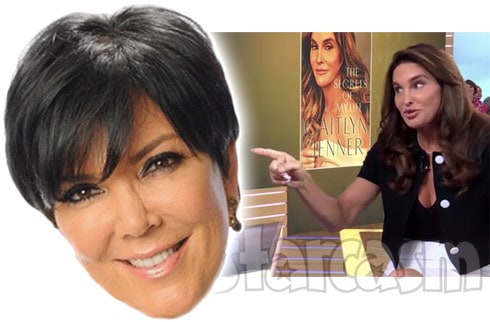 During Sunday night’s airing of Keeping Up With the Kardashians, Kris reacted negatively to passages about herself. In a clip shown to Caitlyn during a Monday morning GMA interview, Kris said, “I’ve never been so angry and disappointed in somebody in my whole life. I’m done.”

First of all, I feel like the book is extraordinarily honest. It is my perspective, and obviously when you do a book like that there are different opinions. I have a lot of friends that know the truth and know what I’ve been through and know the whole situation. Hey, it’s a reality show, it is drama, but I’m just kind of sorry she went down that road. But she’s a good person, and we’ve had 23 great years together and raised wonderful, phenomenal kids.

When Michael Strahan asked about Caitlyn’s current relationship with her kids, she responded, “You know, when you go through something like this, you always hope for the best and it could not have been any better. My kids have been absolutely great. Now, you’re certainly closer with some than you are with the others, but that’s always in any relationship.”

During Caitlyn’s 20/20 interview on Friday, she confirmed for the first time publicly that she had undergone gender reassignment surgery.

The Secrets of My Life will be available Tuesday.