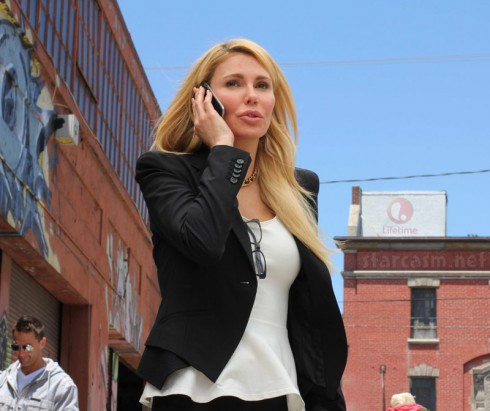 The Real Housewives of Beverly Hills star Brandi Glanville’s resume already includes being a professional model, reality star, fashion designer, television actress and New York Times best-selling author, and on Saturday the gorgeous 40-year-old blonde bombshell will be able to officially add “movie actress” to the list as she makes her acting debut in the Lifetime movie Missing at 17!

Brandi first broke the news back on September 28 when she tweeted, “Just found out my small part in the Lifetime movie Missing at 17 comes out Oct 19th,” before humbly adding, “I’m not an actress, so this should be interesting! :)”

Missing at 17 is inspired by true events and tells the story of 17-year-old Candace (played by Ayla Kell, Make It or Break It), who finds out she is adopted and then runs away from home to find her biological father. Here’s the official synopsis from Lifetime:

When 17-year-old, Candace, runs away from home to look for her biological mother Callie, she falls in with a young man, Toby, who helps her in her quest. When Candace doesn’t return home, her adoptive mother Shannon desperately begins to look for her. When Candace finally finds Callie she discovers she has an older brother Vance and doesn’t receive the warm welcome she had hoped for. As Toby pulls Candice deeper and deeper into his criminal lifestyle, Shannon and Callie join forces to help save Candace.

Brandi Glanville plays Erica, client of Candace’s makeup artist mother Shannon. Here’s a preview clip in which Brandi’s character Erica appears to be rather unsympathetic to the fact that Shannon’s daughter is missing:

So Brandi plays a gorgeous celeb with a touch of bitchiness who is comfortable handling business over a cell phone speakerphone? I feel comfortable saying this casting decision by Lifetime had zero risk attached! 🙂

* It should be mentioned that Brandi will also be appearing in the parody film The Hungover Games alongside RHOBH cast mate Kyle Richards and show alum Camille Grammer. Brandi and the gals shots scenes for that movie back in March (click the link for photos), but as yet we have no official release date. (IMDB just lists “2014” as a release date.)

For those of you interested in more than just Brandi’s appearance in Missing at 17, here is the full preview trailer:

And here is the full Lifetime press release announcing the movie, which premieres Saturday, October 19 at 8/7c: 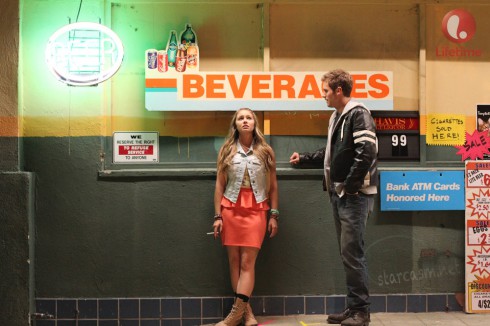 “MISSING AT 17,” TV MOVIE INSPIRED BY TRUE EVENTS, TO PREMIERE OCTOBER 19 ON LIFETIME

“Missing at 17,” will have its World Premiere on Saturday, October 19 at 8pm ET/PT on Lifetime starring Ayla Kell (Make It or Break It), Tricia O’Kelley (The Secret Life of the American Teenager), Marin Hinkle (Two and a Half Men), Alex Carter (CSI, Burn Notice), Ben Gavin (Super 8) and Brandi Glanville (The Real Housewives Of Beverly Hills)

The drama, inspired by true events, is the story of a 17-year-old girl, Candace, who after discovering she is adopted, runs away from home to look for her biological mother. Along the way, she meets a young man, Toby, who helps her in her search. When Candace doesn’t return home after 24 hours, her adoptive mother Shannon reports her missing to the police and desperately begins her own search for her daughter.

With the help of a private investigator, Candace finds her birth mother, Callie, and also discovers she has an older brother, but Callie doesn’t give her estranged daughter the warm welcome the girl was hoping she would get.

And as Candace unknowingly gets pulled deeper and deeper into danger through Toby’s criminal lifestyle, Shannon and Callie find they need to join forces to rescue Candace.

“Missing at 17” was Executive Produced by Pierre David and Tom Berry. The producers are Robert Ballo and Ken Sanders. Christine Conradt wrote the script. Doug Campbell was the director.

* Perhaps Brandi’s Missing at 17 role will finally open the door for that leather-clad super-heroine (or super-villain) (or I guess super-Glanvillain) flick I’ve been clamoring for! 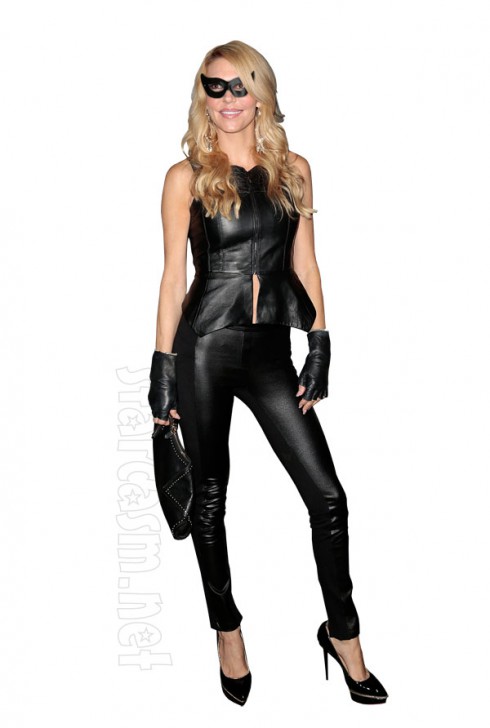 RHOBH: Denise Richards blames herself for why her husband couldn’t heal her