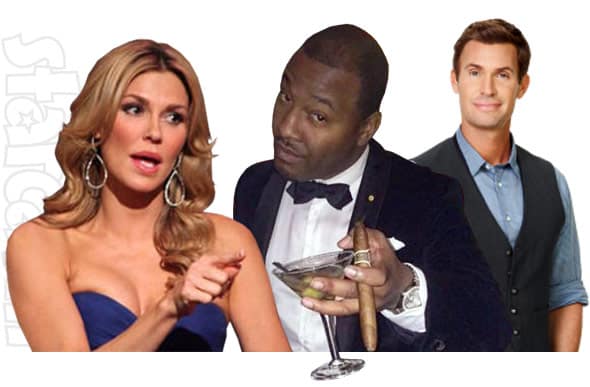 It’s been a crazier-than-usual week for former Real Housewives of Beverly Hills sh*t stirrer Brandi Glanville! On October 22, the 45-year-old’s house was robbed while she and her two boys were at home. Five days later, Brandi was involved in a scuffle at the Casamigos Halloween Party, and actor Kobie “DJ K-LUV” Randolph later accused her and one other woman of bloodying his lip in an unprovoked attack that he described as “12 uppercuts like I’m in a boxing match.”

Brandi was interviewed at the scene by a rather dapper looking policeman, but she adamantly denied that she had anything to do with beating up Kobie. “I didn’t hit anyone or see a fight at all!! I don’t know ‘DJKLUV’ end of story,” she tweeted soon after the story initially broke with a video of Kobie showing off his busted lip on TMZ.

“Please leave me out of this!!” Brandi continued, tagging Kobie. “You walked up to me & your ex girlfriend on the dance floor U2 started talking so I walked away 2 the bar with ur friend. I did not see u get punched & I did not punch u. I’m in no way responsible 4 what happened between U & Ur ex-gf!” In a separate tweet, Brandi tacked on: “I hate liars!” before expressing her frustration directly at TMZ: “You know when you didn’t punch anyone in the face but you start wishing you had?”

The woman who was at the party with Brandi was her good friend, and spray tanner, Katrina Chesson Brown. It appears that Katrina is the ex-girlfriend of Kobie, and she rushed to Brandi’s defense on Twitter.

“Unfortunately an incident occurred Friday night where I felt threatened by a man I felt was harassing me,” Katrina wrote. “Brandi had nothing and was nowhere to do with this.” In a separate tweet she added: “The allegations of Brandi attacking anyone are completely false and on purpose to slander her for his own media attention. I am disgusted to see him get away with being the victim in this. #metoo”

Brandi returned late Monday afternoon to reveal that Kobie had since fessed up and admitted that she wasn’t involved. “My name has been cleared the man @djkluv who made false allegations about me attacking him this weekend has told the police I had no involvement.”

She later shared a message from the “hot cop guy” who wrote up the report, and he confirmed that Brandi was considered a witness and not a suspect in the case:

I’ve been vindicated. The man who made untrue allegations against me over the weekend has told the police (the hot cop guy) that I absolutely had nothing to do with this incident & that I didn’t attack him in anyway nor was I involved at all. I have had a horrible weekend because of this persons lies & I could possibly be losing a business partnership. #peoplesuck 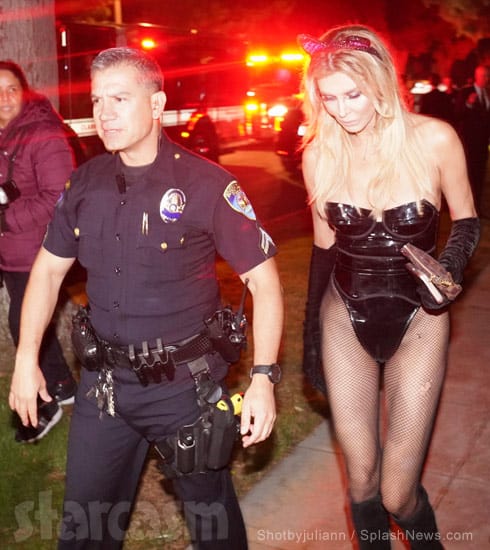 Of course, it didn’t take Brandi long to hop from one controversy to another as she went after (former?) Flipping Out star Jeff Lewis in a scathing series of tweets after he brought up the infamous 2015 WWHL episode in which Brandi tossed a glass of wine at him earlier this month.

First, a brief recap from our three-year-old post about #WineTossGate:

Brandi Glanville appeared on Watch What Happens Live last night after a difficult episode of Real Housewives of Beverly Hills where she threw a glass of wine on cast member Eileen Davidson. When Andy Cohen asked her about the incident, she made a joke about how wasting wine was “alcohol abuse,” but then seemed genuinely sorry. Fellow guest Jeff Lewis defended her contrition, saying she’d been profusely apologizing about the incident, but it turns out her wine throwing ways had not been curbed.

Although Jeff defended Brandi, he also insulted her several times. When she offered to donate her eggs to him, he questioned whether or not they would be “scrambled,” and when a caller asked if Brandi would run her fingers through Jeff’s hair to prove if it was real, he asked if he could get an STD from that. During the next segment, Brandi referred back to the STD comment, and then threw her wine in Jeff’s face, saying that it would help her run her fingers through his hair and would also kill any STD germs.

“Alcohol kills everything,” Brandi said, while Andy Cohen quipped, “Including feelings.” A shocked Jeff said “I can’t believe I defended you.” Brandi said that she was incredibly upset about Jeff’s comment about getting an STD from her, (something she wrote about in her book.) When Brandi broke down into tears, Jeff apologized for hurting her feelings. She turned around in her chair, but finally warmed up to Jeff after he kept apologizing, and offered her to throw another drink in his face.

Brandi later admitted that she and Jeff had agreed before taping the episode that they would exchange barbs as kind of a joke on Andy. But, Brandi and Jeff later had a ridiculous falling out over whose idea it was to throw the wine — with Brandi insisting that it was Jeff’s idea, and Jeff stating it was the other way around.

Jeff appeared on both Jenny McCarthy’s podcast as well as another episode of WWHL earlier this month, and he brought up the Brandi Glanville wine tossing incident on both — once again insisting that throwing the wine was Brandi’s idea.

Fast forward a couple of weeks and Brandi got her Playboy bunny costume thong all in a wad on Twitter and went 100% Donald Trump on Jeff! “So here is some more BS please understand @JennyMcCarthy @Andy this person @JLJeffLewis is a f**king liar on every level!!! I’m pretty sure our texts will prove it! Jeff LOSER/ LIAR Lewis,” she tweeted.

Unlike Trump, Brandi soon felt a bit of Twitter remorse. “Deleted my last tweet because I’m so over it at this point. Time to move on! I’m tired of hearing about it and tired of being tagged in articles about it! #Done ✌?”

But Brandi’s retraction did not come before Jeff had a chance to express his incredulity at Brandi’s outrage. “What are we fighting about now @BrandiGlanville?” he tweeted along with screen caps of Brandi’s two tweets. “I thought we worked out our differences years ago?”

BRANDI: I’m not fighting with anyone @JLJeffLewis I just don’t understand why you keep addressing the incident and not telling the truth. Why can’t you be truthful about it? We were joking, you said you were going to come at me hard & you did. It was your idea for me to throw the wine!

TWITTER USER: Arent u tired? Nobody cares! Say your peace and move thé h### on!?

BRANDI: I’ve tried, but I keep getting mentioned with this years old BS. Trust me, I’m over it too!

So what do you think? Is Jeff to blame for continuing to bring up the wine tossing incident and whose idea it was, or is Brandi over-reacting and not really “over it” as she claims? Oh, and how many big time Hollywood parties do you think ol’ “Gatsby” Kobie “DJ K-LUV” Randolph will be invited to in the future?

Real Housewives and others offer condolences after Russell Armstrong’s suicide