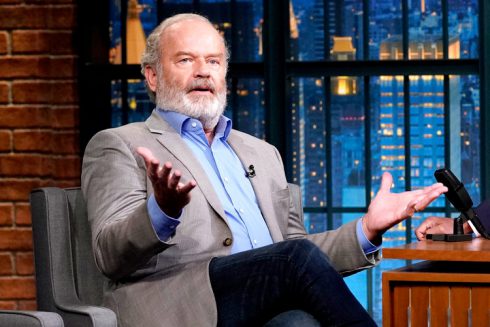 Frasier alum Kelsey Grammer told late night host Conan O’Brien about a unique way his wife Kayte Walsh keeps him in check. “My wife said, ‘Why don’t you get a tattoo?’” he said. “I guess it was sort of based on the idea that if ever I thought maybe a peccadillo outside the marriage was a good idea, that whoever might be – you know – this particular piece of equipment was already signed and owned by someone named Kayte.”

The method may be hilarious, but it definitely hints that Kelsey’s fidelity might be a huge anxiety for their marriage. Kayte and Kelsey first got together when he was still married to his former wife of 13 years, RHOB‘s Camille Grammer.

He carried on a affair with Kayte, a flight attendant he met while traveling, for six months before breaking off his marriage via text message. The sage of Kelsey and Camille’s divorce was an extensive focus of the Bravo reality show Real Housewives of Beverly Hills.

Kayte later admitted to Oprah
she wasn’t “proud” of how they got together.

Kelsey and Kayte (39) have three children together and the 63-year-old actor recently gushed to Closer Magazine about how great it was having three kids under the age of six. Grammar also has four older children.

Camille tweeted out a disappointed response to his interview. “I don’t begrudge him his happiness,” she wrote. “What’s unnerving is that fact I was there to help him get through some of his hardships and supported his career and his sobriety. I was by his side and he acts like I never existed that’s disappointing.”