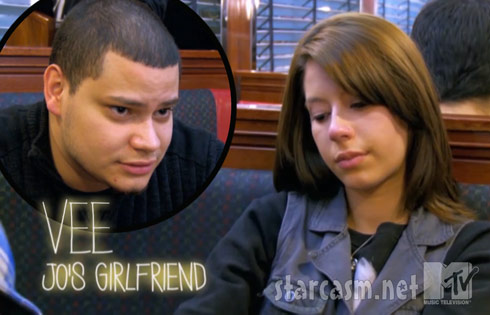 As we reported Tuesday, MTV will be airing “Being Dad: A Teen Mom Special” this Sunday featuring three of the dads from Teen Mom and Teen Mom 2: Ryan Edwards, Jo Rivera and Corey Simms. The network has posted the first preview clip from the show featuring Kailyn Lowry’s ex Jo Rivera and his current girlfriend Vetzabe “Vee” Torres (above). Jo and Vee (and Jo’s son Isaac) are at a restaurant when the divisive topic of marriage and future kids comes up, something Jo apparently isn’t prepared to commit to just yet.

The clip starts off with Vee walking off and Jo telling the producer that “she just needs space for a little bit.” Then, as with the previous MTV “Being…” specials, the fourth wall breaks down as Jo discusses his situation further with an MTV producer, explaining that all he can do is be honest with Vee. “I’m going to tell her the truth,” he says. “This is what it is. What do you want me to say? Do you want me to lie to you — get your hopes up that I’m going to propose to you tomorrow? And then if I do, would it be that special with you bringing it up all the time?”

Vee eventually returns, but is obviously still emotional. Jo handles the situation calmly and says, “Just tell me how you feel and I’ll tell you how I feel, how about that? We can take turns, and then we can kiss and make up.” Vee begins to cry and Jo invites her to sit next to him on his side of the table. 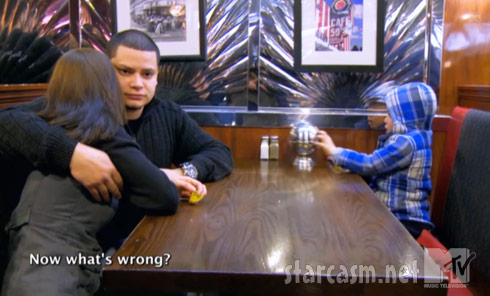 Jo later gets the conversation started again by saying, “You know that I always leave room for doubt for the future.”

Vee responds by revealing how Jo’s “leaving room for doubt for the future” makes her feel. “You make me feel like I’m not worthy to be with, like, in the future, like, to have babies with or anything,” she says. “Just because you have a son don’t mean I don’t want one in the future.”

“That’s not the case. That’s the problem. That’s not what I’m saying,” Jo says.

Vee then says, “That’s how you make me feel. And I don’t feel like I deserve that at times.”

“I’m not gonna sit here and say that I’m decided right now,” Jo says, “that I’m gonna marry you and that I’m gonna have another kid with you because I don’t know what I want. I don’t know if I want to get married, or if I want to have another kid any time soon. And then it keeps coming up. You know, I’m kind of getting urged to do this, like, sooner within a certain amount of time. So, it’s like, for me I’m, like, leave it alone, like, no, no, no. It’s not — I’m not ready!”

“Being Dad: A Teen Mom Special” airs Sunday, June 8 at 8/7c in the evening on MTV, but also shows up on the TV listings at 11/10c in the morning after a “Being…” marathon that includes “Being Catelynn,” “Being Farrah” and “Being Amber.”