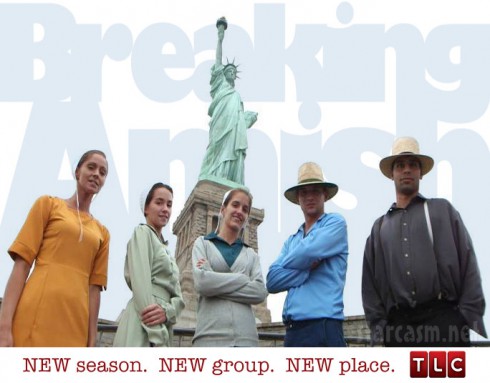 Just four days after the original Breaking Amish cast made their triumphant return to TLC with the two-hour premiere of Return To Amish that drew more than 2.4 million viewers, the network has announced they have begun production on Breaking Amish Season 3 featuring a completely new cast of potentially-soon-to-be former Amish youth heading to The Big Apple to give English life a try.

We don’t know much about the new cast other than first names, ages, the states they are from and the photo above taken in front of the Statue of Liberty. The picture was posted earlier today on the Breaking Amish Facebook page and included the caption, “NEW season. NEW group. NEW place. Breaking Amish will be back sooner than you think!”

According to the press release (included below) the show will feature 26-year-old Miriam from Ohio, 29-year-old Vonda from Indiana, 22-year-old Barbie from Kentucky, 21-year-old Bates and 21-year-old Matthias. (It was not revealed where Bates and Matthias are from originally.)

(New York, NY) TLC’s popular BREAKING AMISH franchise heads back into production for a third season as a brand new cast makes their way to Brooklyn. With potential shunning from their communities and families at stake, the cast navigates through the ups and downs of engrossing themselves into an unknown, yet exciting new culture. The network has ordered ten hour-long episodes, slated to premiere in October 2014.

The new cast features Miriam, a 26-year-old from Ohio who is currently being shunned for continued disobedience to her Amish community and Vonda, a 29-year-old from Indiana, who is already committed to the Amish faith through her baptism and risks losing it all if she chooses to leave. Barbie, a 22-year-old from Kentucky, wants to experience English life even though she is getting pressure from her parents to settle down, while Bates, a 21-year-old, carefree spirit does not fit into his family’s Amish lifestyle and dreams of one day becoming an actor. Viewers also get a look inside the life of 21-year-old Matthias, who was adopted by his Amish parents but has never officially joined the church. The journey from their Amish homes to Brooklyn chronicles the struggles they face and the tough decisions they must make to leave their families and friends behind and change their lives forever.

In the first season of BREAKING AMISH, TLC introduced viewers to five young Amish and Mennonite men and women who left their communities to experience New York City together, and then followed the same group as they traveled to Florida in the spinoff BREAKING AMISH: BRAVE NEW WORLD. In season two of BREAKING AMISH, a different group traveled to Los Angeles for a cultural immersion to English life. The newest spinoff, RETURN TO AMISH, follows the original cast as they continue to acclimate to their new lives while still applying certain Amish traditions to major life events.

BREAKING AMISH is produced by Hot Snakes Media for TLC.