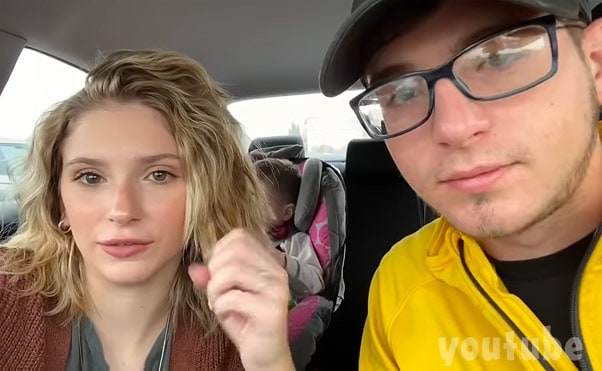 The notoriously on-again, off-again relationship between Unexpected stars McKayla Adkins and Caelan Morrison appeared to be over for good this season. In addition to McKayla and Caelan seemingly torching the bridge between them, the tension between their families appeared to escalate beyond the point of no return. However, the couple looks to have once again done a complete turnaround, as they’ve filmed a very friendly Youtube video together with their two kids. So, are they back together?!

I will cut right to the chase and reveal that neither McKayla nor a source close to the couple with whom we spoke confirmed that she and Caelan are back together. There is also no denial. However, our source says that McKayla and her new boyfriend Josh split up recently, and also reveals that it wouldn’t be the first #McKaelan reconciliation attempt in the last few months!

Before her co-parenting Youtube clip with Caelan, McKayla uploaded another video, one accurately titled “Update On Co-Parenting & Our Court Case.” In the seven-minute video, McKayla confirms that there is currently an active court case regarding the custody of the couple’s two children, 2-year-old son Timothy and 8-month-old daughter Gracelynn.

“I’m not gonna go too much into depth because right now we’re still in the process of going through court, and I just don’t want to put all of that — like what’s going on — out there,” McKayla says. However, she does share details about the custody agreement she and Caelan have reached.

MCKAYLA REGRETS HOW SHE HANDLED EVERYTHING

McKayla says numerous fans asked her for advice on co-parenting. “I really wouldn’t go the way that I did,” she admits, “because I didn’t do it in a mature way. I thought I was doing what was best for the kids, but in the end, I wasn’t. I was just keeping the kids from their dad. So basically, if I could go back in time, I would make sure that Caelan got to see his kids, and got to be around them. I wish I would have made things more clear so there weren’t any misunderstandings on how I felt. And he could, like, fix those things that I felt were unsafe.”

The unexpected contrition from McKayla continues. “I just wish I would have thought through it a little bit more, and not make any rash decisions, not make any immature decisions. I just feel like it led to this very long process.”

Don’t keep your kids from their dad, because in the end it’s gonna be like it’s like a punishment to your kids and the dad. So…if you’re uncomfortable, if you’re in an uncomfortable situation, like I said, just make sure it’s supervised. If not, then just let him see the kids. That would be my best advice.

I’m 100% not going to go into detail about why I was uncomfortable, but I just wasn’t comfortable. I feel like it was for good reason. But, I also feel like I should just let him come over for supervised visits.

Pregnant #Unexpected star McKayla Adkins and dad-to-be Caelan Morrison brutally attack each other on social media, confirm that they have broken up – perhaps for good this time. See what they posted & watch McKayla's new video about what caused the split. https://t.co/K6LsN1i7Xf

WHY WAS MCKAYLA UNCOMFORTABLE WITH THE KIDS BEING WITH CAELAN?

Unexpected viewers will recall that Caelan was held up from going to the hospital when McKayla thought she was having contractions because he had a meeting with his landlord. His explanation was that “the neighbors complained about me having too many people over there or something.” It seemed like an odd aside for producers to leave in, but there may be more to it than what Caelan let on.

We spoke with a source who revealed to us that there are major concerns about Caelan’s “partying,” which is allegedly much more than beer pong and shots. We’re told the children were not allowed to visit Caelan in part because he refused to do the things required to prove he had not been “partying.” (My apologies for the vagueness. I’ve seen credible evidence that the concerns are legitimate, but I’m reluctant to get into specifics.)

This would certainly explain why McKayla has been so hesitant to talk about details when it comes to why she doesn’t feel comfortable with Caelan having unsupervised visits.

MCKAYLA AND CAELAN FILM TOGETHER

After McKayla and Caelan agreed to their new custody arrangement, they filmed their Sunday visitation together with the kids for a Youtube video! In that clip, McKayla just acts like everything is completely normal, talking about the pair’s trip to Target and to a restaurant for lunch. Happy music plays while Caelan has fun with Timothy and Gracelynn — first at the restaurant, and then in a house.

MCKAYLA AND CAELAN TRIED RECONCILING BEFORE?

The Youtube reunion may not be the first time Caelan and McKayla have gotten back together since she moved out! Our source tells us the two attempted to get back together previously, but it lasted all of one visit. The attempt reportedly caused a split between McKayla and her new boyfriend, Josh, but we’re told the two of them did get back together shortly thereafter. Our source says McKayla and Josh were still together right up until the time the video with Caelan was posted. Since then, they’ve reportedly split.

What do you think about McKayla and Caelan giving their relationship another try? How do you think their families would handle it?

Reanna and Taron cut from TLC Unexpected, won’t be back when Season 4 returns in March

UNEXPECTED Max Schenzel out of jail, still feuding with Chloe and Jessica