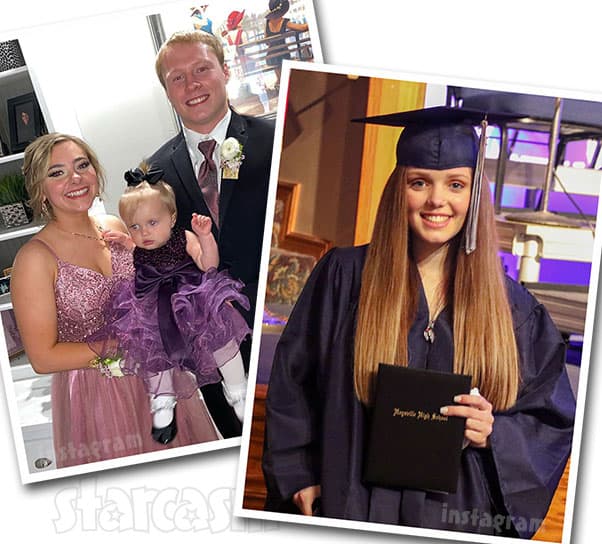 Fans of TLC’s Unexpected were left hanging after TLC cut couple Reanna Cline and Taron Ward were cut from the show in the middle of the season with no explanation. So, how are Reanna and Taron doing? And is there any update on why they were booted from Unexpected?

We have some very positive news to report in regards to Reanna. The 17-year-old mom has remained focused on her studies, and she just graduated high school! A year early!

Reanna’s mom Jessica shared a gallery of Reanna’s graduation photos on Instagram and boasted about her daughter’s achievement in the caption. “Reanna Graduated!!! So proud of her!” Jessica wrote, adding a graduation cap and heart emoji.

Jessica previously praised Reanna’s academic achievements back in February after Reanna was given an honor by her school.

“Congratulations Reanna!” a message from the school began. “You were selected as the Student of the Week at HHS for excellence in academics, behavior, attendance, and positive attitude!” Jessica shared a screen cap of the school’s message on Instagram. “Lil brag moment!” she wrote in the caption. “@reanna_cline has been doing so amazing in school, she’s student of the week! I didn’t even know that was a thing! So proud of you sis! Keep up the great work! Love you!”

Getting back to Reanna’s graduation, in some of her graduation photos she can be seen with a crutch. It’s my understanding that the reason for the crutch is because Reanna recently had knee surgery. It’s unknown if the surgery was due to the proximity of her knee to her butthole. (Sorry, I couldn’t resist!) I don’t know why she required knee surgery, or how well the procedure went. There doesn’t seem to be much information about it at all online.

Why were Reanna and Taron fired from Unexpected?

When Reanna Cline and Taron Ward were removed from Unexpected, there was no real explanation offered up by TLC or the cast members involved. Jessica would later reveal that the decision was made by producers after a phone conversation with Reanna prior to the Couples Tell All taping, but she didn’t provide any more details about the topic of the conversation — merely that it was “personal.”

Viewers hoped that TLC might provide an explanation for Reanna and Taron’s departure as part of the Reunion, but that didn’t happen.

Earlier this week, Jessica took to Facebook to offer some clarification. Unfortunately, she didn’t provide much more information that she did with her prior explanation. Here are both of her posts for comparison:

🤦‍♀️ A personal conversation was had with one of our producers a few days before the “Tell All”….. The NETWORK Canceled our segment of filming for the “Tell All” the day before we were supposed to film. THAT’S WHY WE WEREN’T AT THE “TELL ALL”….. The NETWORK decided to stop airing Reanna and Taron’s story as well, after the conversation with the producer. Hence the reason for the month hiatus. NOBODY BROKE CONTRACT. We are still under contract with them just like everyone else….. Hopefully that’s clear enough for everyone. 😂😂

Jessica’s statement was posted in the Everything TLC Unexpected Facebook group, and it was quickly clear that Jessica’s update did very little to answer the question. Many commenters speculated whether or not the “private conversation” might have included some racially insensitive comments.

“Sounds to me it must’ve been something political or racial for them to do that,” one commenter wrote. “It’s a shame. Her and her mom seemed like amazing people.”

Jessica replied by asserting that the issue with the conversation “definitely wasn’t anything racial.” She later added: “or political.”

In addition to Reanna’s graduation, we also have some positive news to report in regards to her daughter Danica’s dad, Taron Ward. Afer Taron and Reanna’s vitriolic clashes on screen, it was looking like Taron was going to have difficulty getting any time at all with his daughter. But, it seems that Reanna and Taron have worked out their differences to some degree.

Taron has been posting numerous photos with Danica since Ocotber of last year. “As of right now, Taron gets Dani every other weekend,” Jessica revealed in the comments of her Facebook group post.

Proud pop Taron even took Danica with him to his prom! Here’s a prom gallery shared by Taron on Instagram in April:

If you’re curious about Taron’s other prom date, her name is Tori. Taron and Tori have been dating since at least December, which is the first time they both shared photos of each other on social media.

It’s unknown if Taron is fighting for additional custody of Danica.

UPDATE – I realize that social media is not always an accurte representation of what is really going on in people’s lives, but I just can’t imagine this new Instagram post by Jessica would happen if tensions were still extremely high with Taron: