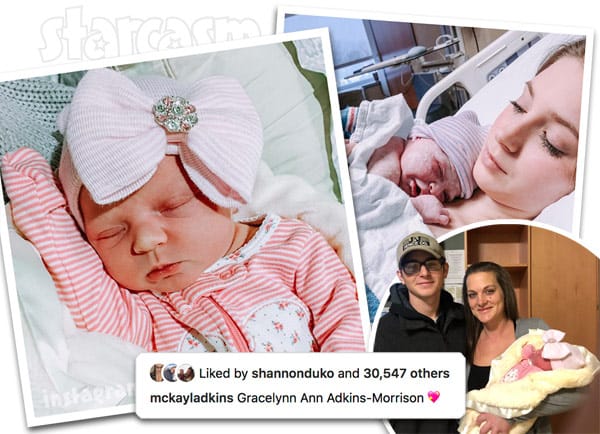 Unexpected mom McKayla Adkins gave birth to her second child, a girl, on Tuesday after a “fast and easy” labor. Over the course of the next 24 hours, McKayla shared all the details about Timmy’s little sister — including her name and LOTS of photos!

In a brief YouTube video featuring a montage of images, McKayla revealed that her daughter’s name is Gracelynn Ann Adkins-Morrison. She had previously shared that Gracelynn weighed 7lbs, 2oz, and measured 19 inches long when she was born at 9:47AM. In her most recent update, McKayla posted a photo of Gracelynn asleep and she captioned it with a very positive update: “She breastfed, pooped, peed, and put herself to sleep.. She’s such a good baby.”

But enough words, let’s get to those photos! Here are some of the ones shared by McKayla, and also some images and tweets posted by McKayla’s mom, Shannon:

This labor was so fast and easy I can’t believe it.. can’t wait to share every detail with you guys. It’s crazy one!

My second greatest accomplishment in life ?

I can't get over just how perfect my granddaughter is. Everything about her is so sweet. We had a long night & were all exhausted but mckayla was amazing & we have another perfect little angel to add to our family. 7lbs 2oz 19in long born at 9:47am another day I will never forget! So proud of you mckayla I love you both so much ❤

Could she be any more adorable?! Can't wait till my girls get back home later. Miss them both & timmy needs to love on them too! Crazy how fast time fly's, I'm a grandma of 2 now…. Guess im getting old lol! pic.twitter.com/nOjHsSEbS9

The birth announcement wasn’t met with 100% positive reactions, but Shannon tried to remain focused on the positive vibes:

Thanks all who were positive! This was a beautiful day & those pathadic enuf to turn it into a chance to bash, I just feel sorry for. My kids & grand kids are my life, my past no longer defines me & those who know me know how much I love my family! Thanks for the support! ❤

McKayla and her family weren’t the only ones overjoyed by Gracelynn’s birth. Her other grandmother, Caelan’s mom Shelly, also shared her excitement along with more photos — including several of Gracelynn with her dad.

After posting that photo, someone tweeted that Caelan didn’t look too happy in the picture. Shelly responded with another photo and some clarification:

In case you missed it, McKayla and Caelan recently had a MAJOR falling out that spilled over to social media. McKayla is currently living with her grandparents again, and her plans are to remain there with Timmy and Gracelynn indefinitely.

Although it is clearly not the ideal situation, congratulations to McKayla and Caelan on the birth of a beautiful baby girl. Hopefully, if they are unable to work through their differences and reconcile again, they will be able to get beyond the conflict and co-parent in a way that provides a healthy and supportive environment for both Timmy and Gracelynn.