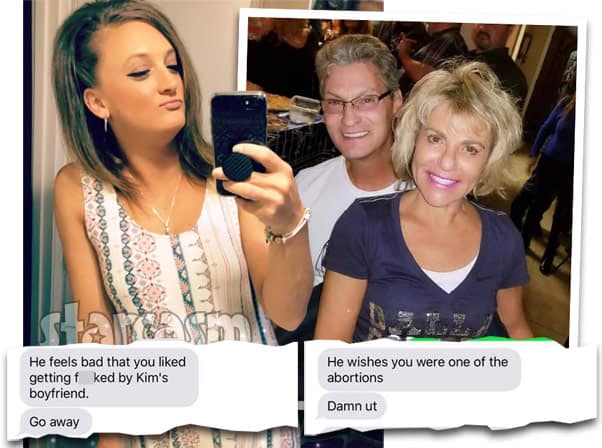 On Monday night’s season premiere episodes of Teen Mom OG, Tyler Baltierra took a trip to Austin, Texas to visit with his dad, Butch Baltierra, and sister, Amber Baltierra. Both Butch and Amber relocated to Austin to enter a rehabilitation facility, and their stints seemed to have a hugely positive impact on both of them.

However, Butch revealed in his initial conversation with Tyler that he was having a rough time and was engaging in “marijuana maintenance” to help cope.

Amber posted about Butch’s pot use on Facebook when she was asked about Butch back in early April. “He’s smoking weed again,” she revealed at the time. She added that “he drinks a couple beers here and there as well. He thinks he can manage all this but it will progress into something big again. That’s what this disease does.”

It seems Amber was right with her prediction. Tyler confirmed during his recent appearance on Kail Lowry’s Coffee Convos podcast that Butch has indeed fallen off the wagon. “He’s in the middle of a relapse right now,” Tyler revealed. “That’s the reality of that situation right now.” He added: “Now we go back to square one, do this relapse thing and kind of ride this train out and see what happens.”

Tyler and Catelynn both had less than positive things to say about Butch’s new girlfriend Caroline on the podcast, and they referenced some allegedly “disgusting” text messages that Caroline sent to Amber about the sexual abuse that Amber suffered at the hands of her mom Kim’s boyfriend. “We don’t really try to film with [Caroline] because I said if I see her, my ass is going to be sitting in jail,” Catelynn admitted. “The stuff that she said about [Amber] my sister-in-law does not make me happy and I would love to beat her ass!”

Amber posted the alleged texts from Caroline on Facebook back in late March — and they are indeed disgusting. In what looks to be a bitter late night exchange battling for the affection of Butch, Caroline tells Amber that Butch “feels bad that you liked getting f**ked by Kim’s boyfriend” and “he wishes you were one of the abortions.” Caroline also writes: “He knows you have a very low IQ. You are mentally challenged therefore he is trying to help you.” (Full texts included below.)

Amber had been very vocal about her disdain for Caroline for months prior to posting the text messages. Just a few days before Christmas, Butch shared a photo with Caroline and her two daughters on Instagram and wrote: “My three favorite people in this world.”

One commenter replied by asking Butch: “What about Tyler and his sister? ?”

Amber responded to that question with this reply:

I’m his daughter. This is his bullsh*t wack drunk girlfriend with HER children. I’m sorry I don’t let anyone get my goat but this just [plain] hurt. This woman is nothing like his type. All she has is money. Sh f**king drinks wine gets drunk and is neurotic as f**k. So embarrassing with her in New York in front of my whole family. Honestly, I’m just distancing myself from them. We work different programs and I’m tired of trying to be “the one who cares.”

Butch has made several posts on Instagram over the past couple months, but they are all videos of his fence repair jobs and attending church. Meanwhile, he appears to have completely scrubbed his previous account of all photos of Caroline. It’s unclear if the two are still together.

Here are the full alleged text messages shared by Amber with the profanity edited out:

Tyler seemed to suggest on Coffee Convos that viewers will not be seeing much of Butch this season, so the footage from the season premiere may be pretty much it. To know for sure, you’ll have to keep tuning in for new episodes of Teen Mom OG airing Monday nights at 9/8c on MTV! (NOTE: The episode on Monday, June 17 will be airing at 8/7c due to the MTV Movie and TV Awards.)