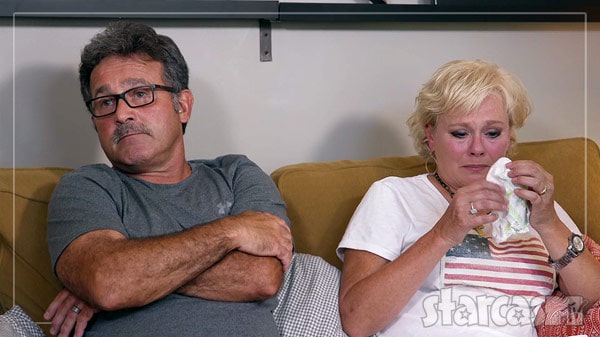 It’s so easy to get caught up in the two-dimensional drama of reality television that I think we forget sometimes that these are real, three-dimensional people we are watching and reading about. Producers and the media (like Starcasm) tend to focus on the surface drama, which is like the mesmerizing and entertaining ripples created by a smooth stone skipping across a lake. We often forget about the depths below the surface — the real emotions and struggles of the real people we are watching. But, on rare occasions, reality television pauses and sinks, and sometimes the result is a brutally (and beautifully) honest portrayal of other human beings — and of ourselves.

Viewers of the current season of Teen Mom OG have been gifted with these brutal and beautiful moments in the scenes featuring Ryan Edwards’ parents Jennifer (Jen) and Larry Edwards. On the surface, there is all the drama surrounding Ryan, his wife Mackenzie, Ryan’s ex Maci, and their son Bentley. Ryan is a recovering heroin addict who left rehab early. Mackenzie comes across as an entitled and bitter person who loves the attention almost as much as she loathes Maci. Maci is a mother of three just trying to do the right thing when it comes to the safety of her son Bentley. Blah, blah, blah…

But what’s really going on? Here’s a recap of a scene from last week’s episode that does a great job of revealing the answer to that question for Ryan’s parents:

“How have things been since Ryan’s gotten home?” show producer Jeni asks Larry and Jen after Ryan’s return from rehab.

Larry continues: “I love the fact that if [Ryan] calls me or I call him, and he’s on the phone, I can understand every word that he says. I love it. And for the thirty days he was in rehab, it was the best I’ve ever felt because I knew he was gonna be OK. I knew that I wasn’t going to get a call and somebody tell me that I needed to come to the hospital, or whatever.” 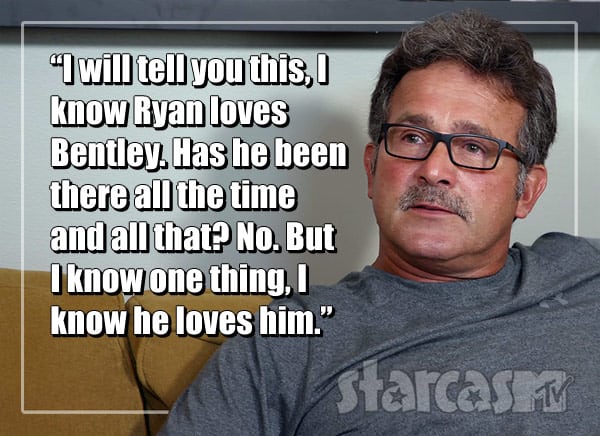 “I wonder every day — my guard’s always up,” Jen says about her worries for Ryan, as she continues to wipe tears away. “I’m always looking for signs of something. I don’t want something to happen and think I could have done something different.”

Larry then explains that of course he and Jen knew that “something was going on” with Ryan. “We knew that. But any time we confronted him there was two things that happened: One, there was an argument. And two, he would leave…We’re not stupid, and we’re not naive. Now, we have a few more things to kind of educate us a little bit and see, you know, what the signs are. But we had no idea what Ryan’s triggers were. Didn’t have a clue.”

Larry reveals that they have since learned what some of Ryan’s triggers are before revealing that the two main ones are when his mother Jen gets upset and when someone uses his son Bentley.

“He hates it if I’m sad or upset,” Jen says, and by now it’s more than just tears — she is obviously in a great a deal of pain. “And so I have to hold it together, which is hard.”

“You make her cry, it’s a trigger,” Larry says. “You use Bentley, it’s a trigger. So you can imagine how many triggers we’ve been fighting here lately. Yeah, it’s been tough.”

My recap cannot do the scene justice, so I encourage you to watch Season 7 Episode 4 titled “System Overload.” The scene starts at right around the 27:50 mark. Oh, and you do not have to be a fan of the show to appreciate it.

In this week’s episode, viewers saw another honest scene with Jen and Larry, although it was a little less emotional that the previous one. Jen and Larry are in the garage this time (not like Amber and Matt’s garage, but Larry’s real deal “this is where things get fixed” garage) as they address the fact that because Maci is not allowing Ryan to see Bentley until he takes a drug test, that means they haven’t been able to see Bentley either. And remember, the unofficial shared custody arrangement that has been in place for close to a decade has been with Jen and Larry (in truth) and not Ryan.

“How do you feel not seeing Bentley as much lately?” asks producer Jeni.

“It’s like we’ve been left out,” Larry adds. “She hasn’t once come to us and asked us anything. She has three kids, a husband, and a life — but you know what? One of those kids is part of our life. If she has problems with Ryan –”

“Or if she wants certain things from Ryan,” Jen interrupts, “and he’s not giving those to her, then don’t hold it against us. We can see Bentley without Ryan being here, I don’t have a problem with that. And if Ryan’s doing anything — ANYTHING — in this house and I see one sign of anything, he’s not gonna be here. She should know that Bentley’s gonna be safe here.” Jen begins to get emotional and tear up. “I would never put him in any kind of harm. Ever. I mean, I think that some of her reasoning is ‘OK, he can’t come here and maybe that will make Ryan more accountable.’ Maybe? I don’t know. But, it’s hurting Bentley really bad, and that breaks my heart.”

Jen pauses before admitting she understands where Maci is coming from. “But I mean, yeah, I know as a mom she wants the best for Bentley, and I know she’s probably scared. We’re all scared.” 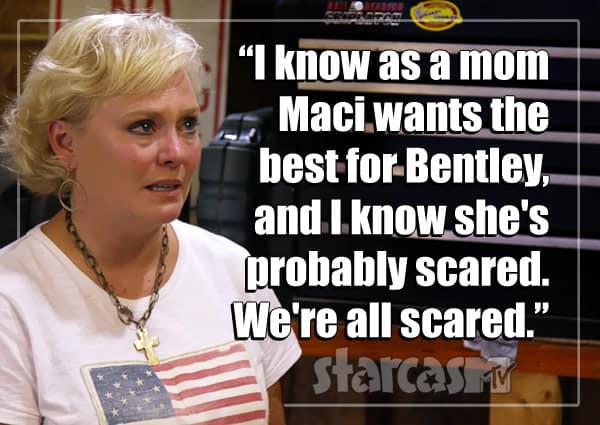 I’m not really sure how to wrap up this post. Jen and Larry are the parents of an only child who is on a hugely popular reality show because he got his 16-year-old girlfriend pregnant. That son is now struggling with a heroin addiction as his son (and their grandson) is caught in the middle of a custody battle that serves as a trigger for his drug use. Those words summarize the situation, but the scenes on the show this season are really telling the story.

I want to thank Jen and Larry for putting themselves out there like this, and I want to applaud Teen Mom OG producers for capturing it and showing it. The show was recently nominated for a Critics’ Choice Award for best unscripted television show, and I think it is scenes like these that send a big “F*** YOU!” to those critics laughing off the nomination or the ones angrily complaining about how the show glamorizes teen pregnancy.

I should point out that Jen and Larry have been inspiring to watch for years. Their dining room table discussions with Ryan, who has been anything but receptive to criticism or advice, could help teach a class on parental restraint and communication skills. I really cannot imagine baring myself emotionally on national television like they have done repeatedly for eight years.

I should also point out that part of what makes Larry and Jen special is that they are willing to be honest with themselves. They seem to come at life with a sense of humility that allows for self examination and perspective. There are other people on this show baring themselves emotionally, but it is not a good thing because they seem to lack the ability to see themselves accurately — at all. Of course, built into the concept of the show is the fact that the main stars are young, so perhaps we will be seeing them grow and mature and become more “Jen and Larrylike” over the next 15-20 seasons. 😉

You can see Jen and Larry and the rest of the Teen Mom OG cast in new episodes airing every Monday night at 9/8c on MTV.