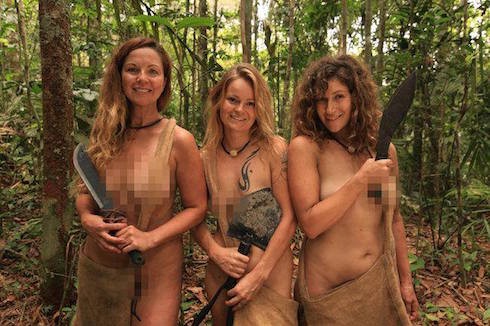 The Naked and Afraid PSR (or “Primitive Survival Rating,” for the uninitiated) is basically the show’s answer to endless reams of sports statistics. It’s a somewhat objective method of measuring how prepared the show’s participants are to go out into the wild for three weeks before they leave and then, after for the fact, of figuring out how much they developed or regressed. It’s also subjective enough for fans of the show to argue over during the long breaks between seasons.

And tonight’s Naked and Afraid XL Season 3 finale marks ten combined seasons for Discovery’s biggest survivalist hit. So there are a lot of studs out there, PSR-wise -– and a whole lot of duds. Let’s talk about them! Here are the ten survivors with the highest Naked and Afraid PSR, the one with the lowest, and as many highlight clips as we felt comfortable jamming into one browser headache of an article.

For starters, it may come as a surprise that the show’s overall top dogs are tied. EJ “Skullcrusher” Snyder and Laura Zerra both have three Naked and Afraid and XL appearances to their name, and both have a Naked and Afraid PSR of 9.1. (They’re also the only two participants in the show’s history whose PSRs are above a 9.)

EJ made it through the full 21 days in Tanzania with Kellie Nightlinger in Season 1; then he and Laura subbed in for the Season 2 premiere and made it all the way through again. Laura’s Season 1 episode involved 21 days in a Panamanian jungle (known as “going full Panama”). And she and EJ were both part of the first season of XL, back in 2015.

After those two, the Naked and Afraid PSR Top Ten are rounded out by:

As far as the absolute lowest PSR in the history of the show? That dubious distinction belongs to one Cassie DePecol, whose participation in the Season 1 episode “Double Jeopardy” has been described this way: “So utterly useless that the three other people on her team debated leaving her behind on extraction day.”

Cassie snagged a 3.4 PSR for her troubles–but did manage to make it the full three weeks. (Possibly because she was part of a four-person team and not just one of two.)

If you missed Cassie’s episode and want to check it out, Discovery’s made it available here.

Finally, if you’re one of the many viewers who’ve noticed that the women on Naked and Afraid tend to score lower than the men, you might want to check out the work of the anonymous statistician behind the blog Mathscinotes, who’s compiled a ton of data on almost every episode in the show’s non-XL run.

According to his findings–which you can read for yourself here and here–the women on Naked and Afraid tend to be younger than the men (35.39 years to 31.07 years old on average) and have lower starting PSRs (7.15 to 6.49).

Women do tend to gain a bit more than men, though, and episodes that feature a solo finish are almost evenly divided between men (9) and women (8). And, on average, those 17 finishers spent an almost identical amount of time without their partners.