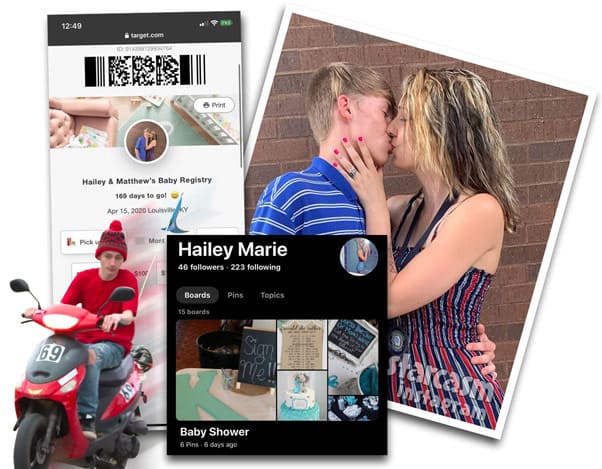 Unexpected fans are all abuzz over reports that Matthew Blevins and Hailey Tilford (aka Hailey 2) are expecting a child together. Neither Matthew nor Hailey 2 have confirmed they she is pregnant, but evidence continues to mount that Matthew’s daughter Kinsley may be getting a younger sibling soon!

Let me reiterate up front that there is NO confirmation that Hailey 2 is currently pregnant. That being said, the speculation is quite well founded given the evidence. Let’s take a look!

On Saturday, November 2, Hailey 2 posted a series of photos from her friend’s wedding in which she certainly seems to be sporting a baby bump! Here she is with Matthew: 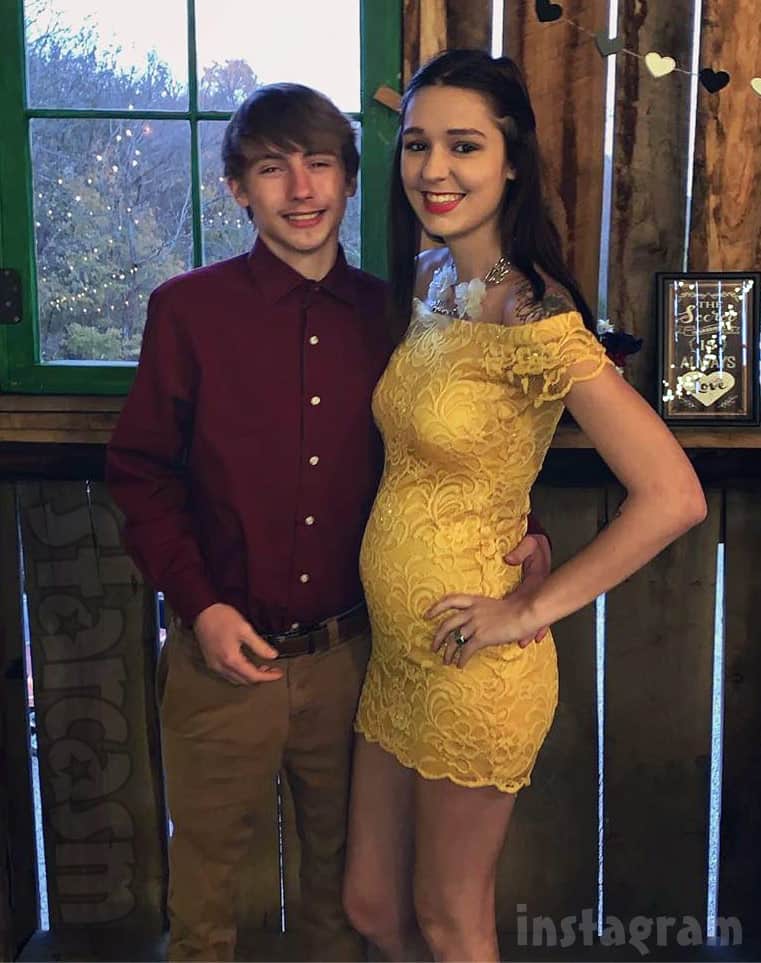 There is a screen cap of a Target baby registry for Matthew and Hailey (above) making the rounds on reddit and social media. The registry indicates that Hailey’s due date is April 15, 2020. I tried to confirm that the registry exists, but despite the fact that the “169 days to go!” countdown would indicate that the screen cap was taken today, I could find no evidence of the registry actually existing — even in Google cache. Scanning the bar code with the Target app generates a “No active events” message.

If the registry is/was real, it’s important to note that it could have been created by anyone. It also could have been meant as a joke by Hailey and Matthew to troll fans. Of course, if that were the case, I would have guessed that the couple would have chosen their anniversary date of April 24 as the due date?

According to these screen caps, Hailey’s Pinterest page included lots of images that clearly seem to indicate that she is pregnant and planning a birth announcement as well as a gender reveal VERY soon. The baby shower pins all appear to be for a boy, so that may be a potential spoiler.

Interestingly, the birth announcement images include more than one Halloween-themed ideas. Perhaps we are just a couple days away from the big announcement?!

The pins from the screen caps are no longer available on Hailey’s Pinterest page because she has reportedly made them private, but I can confirm through Google cache that she did create a “Gender Reveal” board on September 24.

Also interesting is that the gallery of screen capped images includes some wedding photo pins in which the bride is pregnant. As the poster points out, that certainly seems like an odd thing for a teenage girl to post unless she was already pregnant.

NO RECENT BODY PHOTOS OF HAILEY

More evidence that seems to back up the theory that Hailey 2 is pregnant is actually a lack of evidence — as in recent photos of her on social media. As devout fans of the show are certainly aware, Matthew and Hailey 2 LOVE posting photos together! The pair were always sharing snaps, often times in bed or in other intimate situations.

The couple knows that fans cannot get enough of their amazing tongue piercings, and we saw Hailey 2’s as recently as last week. But, we haven’t seen a full-body shot of Hailey 2 since she was in New York City to film the Unexpected Reunion in early September.

If you work backwards from the due date on the Target baby registry, that would mean that Matthew and Hailey 2 conceived around the last week of July. That’s roughly a month and a half prior to the Reunion taping, so if Hailey 2 is pregnant, she could have known at the Reunion.

In preview clips for the Reunion aired by TLC, we see Hailey 2’s dramatic entrance just prior to what will surely be a dramatic face-off with Hailey 1 and her mom. Can you imagine if that dramatic face-off includes Hailey dropping a HUGE bombshell by revealing she is pregnant?! The timing would certainly seem to line up with Hailey 2 looking into Halloween-themed pregnancy announcements and gender reveals. It would make sense that she would have been told to wait until after the Reunion airing to go public with the pregnancy. Remember, all of this is purely speculation though!

Since we are on the topic of a lack of evidence being evidence in regards to no recent full-body photos of Hailey 2, I would find it pretty amazing if she did reveal that she is pregnant at the Reunion taping and no one leaked the info. I seem to recall Chloe Mendoza making some sort of subtle reference to Hailey 2 potentially being a mom during her post-Reunion fallout with her co-stars, but I couldn’t seem to find it.

Hailey is currently enrolled in college, and she has previously stated that she wanted to wait to have children with Matthew. Of course, if shows like Unexpected and Teen Mom have taught us anything, it’s that pregnancies often happen even if they aren’t planned — especially if the potential dad likes getting his noodle wet.

A few weeks after the Reunion taping, Hailey 2 took to Instagram to assure everyone that her fairy tale romance with Matthew was still happening despite all of the negativity they have been receiving online. I will wrap up this post with her message:

Alright here we go.. ME AND MATTHEW AREN’T BROKEN UP❗️ If you don’t like that then you probably just should stop reading now. These pictures were within the first week or two of me and Matthew’s relationship, I like these pictures because we were getting to know each other, falling in love slowly but surely, having fun like best friends.

Y’all don’t like me or him because of what you saw on a tv show, we get that but we aren’t here on this earth to impress anyone. We have come to conclusion NO MATTER WHAT we are going to get hate, we can’t just void our lives because of some comments and haters. We are done turning off our comments, we are done feeding into the drama. If you send either of us negative messages we are just going to deny them and/or block you, simple as that. You comment on our stuff with something negative we will just read right over it.

I am beyond in love with Matthew and I know for a fact the boy I fell in love with is down for me, so he’s made some mistakes ? There’s a lot of demons in my closet too nobody knows about. WE ARE NOT BORN TO BE PERFECT. The point of this post is, YES we are together, yeah y’all can call me stupid because y’all think he cheated because you’re believing everything you see on the internet but I know the truth. I am going to continue to live and learn with my amazing boyfriend by my side, if you don’t like that, hey that’s a you problem 😂👌🏼 Matthew loves me for me and I love him for him. Continue to hate and make comments just wanted to warn y’all, it ain’t phasing us anymore. We knew being on a TV Show would do this so therefore we are learning to live with it. Have a nice night though y’all ❤️

UPDATE – It seems that Hailey’s confidence in being able to remain above the hate has diminished dramatically. While putting this post together she share this very concerning message in her Instagram stories:

Okay y’all win.. leave me alone dude. I’m mentally drained so I hope that finally gives y’all the satisfaction you oh so desired. I’m done. I don’t want to argue with anyone anymore. I am depressed and that is exactly what I “deserve” in yalls eyes apparently so just leave me alone. I am NOT the awful person everyone has made me out to be but y’all continue to come at me. If Making someone feel suicidal and hate themself if what you wanted then congratulations.

UNEXPECTED Tylor joins the Navy! Plus, he explains the cheating, his hair & the whole male stripping thing