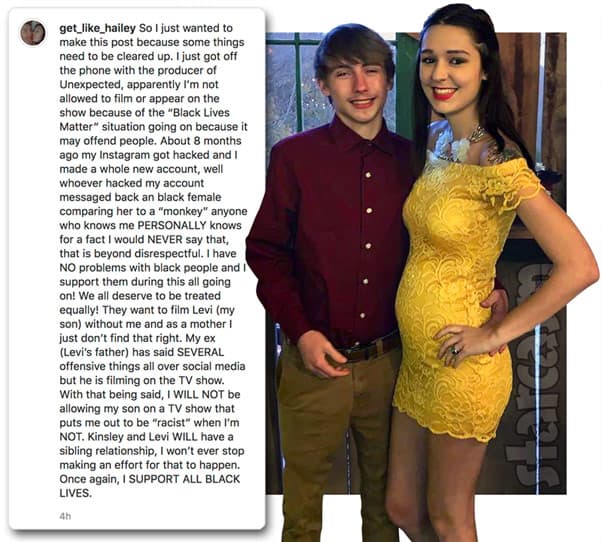 “So I just wanted to make this post because some things need to be cleared up,” Hailey began her announcement in an Instagram post on Saturday. “I just got off the phone with the producer of Unexpected, apparently I’m not allowed to film or appear on the show because of the ‘Black Lives Matter’ situation going on because it may offend people.”

Hailey then explains the specific comment that producers were concerned about. “About 8 months ago my Instagram got hacked and I made a whole new account, well whoever hacked my account messaged back an black female comparing her to a ‘monkey’. Anyone who knows me PERSONALLY knows for a fact I would NEVER say that, that is beyond disrespectful. I have NO problems with black people and I support them during this all going on! We all deserve to be treated equally!”

I don’t recall Hailey’s account being hacked last fall, but I could have easily missed it. I know that she currently still has the same @get_like_hailey account that she had back in August. Hailey said that her account was hacked back in March, but that can’t be what she is referring to above because that was just three months ago.

Despite not wanting to film Hailey, producers apparently do still want to include her infant son Levi on the show. “They want to film Levi (my son) without me and as a mother,” Hailey 2 says. “I just don’t find that right.”

When asked about it in the comments section, Hailey 2 explains that she was told that she could be present when Levi filmed, but she couldn’t be on camera herself. That concept DID NOT sit well with Hailey 2. “I WILL NOT be allowing my son on a TV show that puts me out to be ‘racist’ when I’m NOT,” she says.

Hailey also reveals that producers are apparently OK filming Matthew for the show. “My ex (Levi’s father) has said SEVERAL offensive things all over social media but he is filming on the TV show.”

Hailey is 100% right on this one! There are numerous times he did Instagram Live streams in which he repeatedly used the n-word. (You can click here for some example clips.)

#Unexpected couple Matthew & Hailey 2 continue to feud online as they both accuse each other of cheating & she gets a protective order. Get a full recap from the past 2 weeks, including a baby name reveal! (Will it be Matthew 2?) https://t.co/AUKBQ3aByZ pic.twitter.com/LqydUoavs5

Hailey 2 shared a video of Matthew using the term repeatedly in her Instagram stories after her initial post. A commenter asked if she had sent the clips to her producer. “Yes,” Hailey 2 replied. “She hasn’t responded and most likely won’t.”

Matthew’s use of the word even elicited a response from his Unexpected co-star Chloe Mendoza. “Matthew saying the n-word multiple times on Hailey’s live is trash and ignorance,” Chloe shared in her Instagram stories in November.

Matthew responded to some of the criticism at the time by pointing out that he doesn’t say the “hard ‘er'” at the end.

In addition to his affinity for that word, Matthew also has a tendency to be a little less than polite to women as well — especially if they are pregnant or have been pregnant with his child. He has called Hailey 2 a “wh*re” repeatedly, and then he has numerous other insensitive gems like this post: 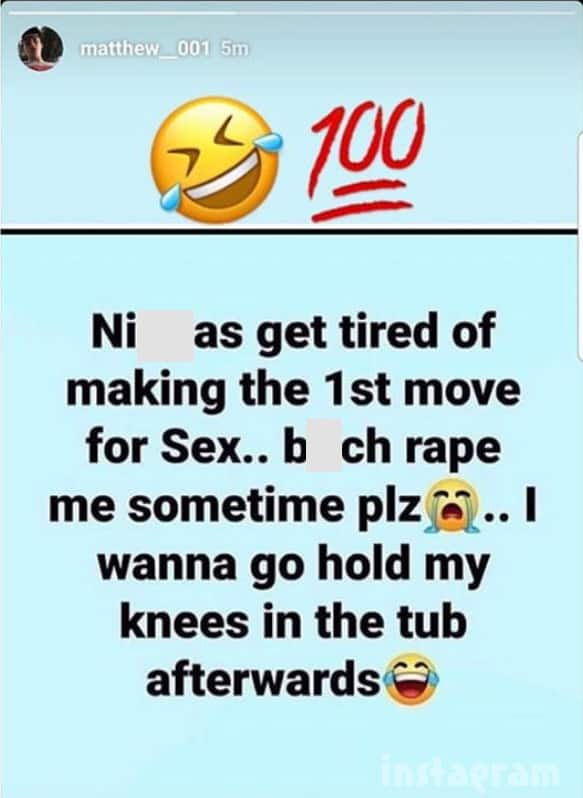 If what Hailey 2 is saying is true, I am a bit surprised. Matthew’s comments and actions are horribly insensitive and immature, and he certainly seems more deserving of not being allowed to film because of that than Hailey 2. No, I’m not ignoring the obvious fact that Matthew is more valuable to TLC because they have been filming him and Hailey 1 for some time now. They would probably have to cut Hailey 1 completely if they decided they couldn’t film Matthew. The same is not the case if they don’t film Hailey 2.

After sharing her post, Hailey 2 responded to some of the comments before removing them completely. In addition to further expressing her frustration over not being allowed to film, Hailey also revealed that Unexpected Season 4 will premiere in August:

COMMENT: Matthew says ni**a… GET HIM OFF OF THE SHOW!!!

HAILEY 2: Sadly he will be back on your screens in August for season 4 lol.

COMMENT: What does Matthew have to even film? He’s never even met Levi 😂😂 How do you film a father who wants nothing to do with his kid? Secondly, they need to push to have your account verified, that would make everything so easy because I’ve seen several fake pages of you. I would love to see you on season 4 to show how far you’ve come and to maybe get a paternity test so Matthew has to believe you, when you say that Levi is his son. I would also demand you be on season 4 because season 3 didn’t make you look good to he honest. They edited you to be a terrible person and I don’t think you are any more.

HAILEY 2: He’s on season 4 because he goes and sees Kinsley so he’s in her life.

Are Matthew and Hailey 2 returning for #Unexpected Season 4? Plus, a pregnancy update! https://t.co/h2x4w3GgLe pic.twitter.com/BQnWalFQC3

COMMENT: Yeah definitely don’t let them put your son on there then cause they’ll try to turn it around an make like Matthew only takes care of him or some bs lmfao.

HAILEY 2: Exactly what I was thinking, let them film my son without me and then what them somehow say something like “oh Hailey isn’t even around her son” HAHA. NOPE.

COMMENT: That’s so wrong. Would rather see you and Levi and Cole over deadbeat Matt any day.

HAILEY 2: We’re planning on making a YouTube to keep you guys updated on our beautiful family. 💛

UPDATE – Both Hailey and Matthew have responded to our story on Instagram:

HAILEY: As I’m laying here in bed and everyone is dm me my ex’s post, I’ve come to conclusion I’m DONE letting Matthew affect my life. I have a handsome son who is loved unconditionally by me and my boyfriend and my family! I am treated like a queen by my boyfriend who is a sweetheart, a hard worker, and an AMAZING father to our baby. The thing about me is I don’t NEED a TV show to provide for my child, me and Cole work every day at our jobs to make everything we need happen. I’m going to continue to let my ex be a child while I continue to live my life stress free. I’ve let him ruin enough so I’m done with the high school drama. Don’t speak to me about my ex, send me his stuff, NOTHING. Levi has a father, COLE SMITH 💯❤️

MATTHEW: To make sum clearrrr , IT IS FACTUAL when we was together that was her texting that girl back with all the racist comments, I can put that on my daughter, my dead grandpa, or anything else, I was next to her as she was p*ssed going off being racist toward the girl, I haven’t never offended anybody of any race or been racist towards any race, HALF OF MY FRIENDS are black, just hadda clear the air since my names being put out there, let’s keep it all the way 💯

HAILEY: Once a child, always a child. He’ll lie on his current girlfriend too when they break up.

UNEXPECTED Matthew and pregnant Hailey 2 break up again: ‘We are nothing but toxic’