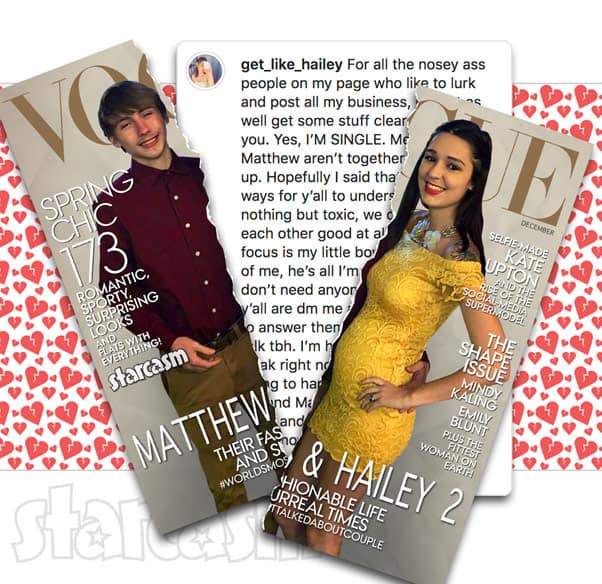 Matthew and Hailey 2 are essentially the stars of their own reality show via their social media accounts, and the latest episode was aired there as well. “For all the nosey ass people on my page who like to lurk and post all my business, I might as well get some stuff cleared up for you,” Hailey wrote in a caption to an Instagram Boomerang clip in which she rolls her eyes and puckers her lips.

“Yes, I’M SINGLE,” she continued. “Me and Matthew aren’t together, we broke up.”

Hailey had previously shared some vague quotes in her Instagram story hinting at a break up, and apparently she got frustrated by her followers asking questions and/or speculating about whether or not that meant she and Matthew were done again.

“Hopefully I said that enough ways for y’all to understand,” Hailey 2 snarked. “We are nothing but toxic, we don’t treat each other good at all.”

The first-time mom-to-be continued by explaining a little more about the break up, how she is handling it, and whether or not there was any possibility that she and Matthew might get back together at some point:

My main focus is my little boy growing inside of me, he’s all I’m concerned about. I don’t need anyone’s opinion.

A lot of y’all are dm[ing] me and I’m just not able to answer them all, I don’t want to talk tbh. I’m hurting right now. I’m weak right now.

I don’t know what’s going to happen in my future.. will me and Matthew heal and fix our flaws and get back together? Idk tbh. Right now all I know is I want to go to therapy and fix me and focus on my baby boy inside of me.

The break up announcement comes less than 48 hours after Hailey 2 did a lengthy Q&A session with her followers. When asked if she and Matthew were still together, she shared a video of her and Matthew in bed together. She also revealed that she intended for her son to have Matthew’s last name. It’s unclear if that is still the plan.

Hailey 2 and Matthew confirmed that she was pregnant during the Unexpected Couples Tell All special, but we reported on the pregnancy back in October. Hailey 2 is due on April 15, 2020, and she has since revealed that she is expecting a baby boy.

It’s starting to sound like it will be a coin toss as to whether or not Matthew and Hailey 2 are together when Matthew 2 arrives.