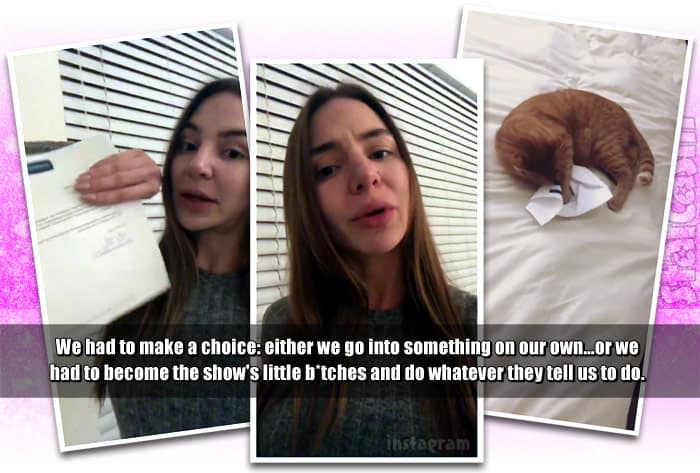 In a series of Instagram story videos, 90 Day Fiance: Happily Ever After star Anfisa Nava reveals that she and her husband Jorge Nava have been invited back for another season, despite the fact that they have told producers they aren’t coming back.

Anfisa reveals that she and Jorge made the decision not to return a couple months ago. “We had to make a choice: either we go into something on our own, like our YouTube channel and other things, or we had to become the show’s little b*tches and do whatever they tell us to do, like some people,” Anfisa says, clearly referencing other cast members who have elected to return. “You know what choice we made,” she added.

Anfisa says she didn’t hear anything from the production company after informing them of her and Jorge’s decision — until this week. “A couple days ago I get a letter from them,” Anfisa says as she holds up a letter. “This letter — one for me, one for Jorge — saying that they renewed us for a new season without us even signing anything.”

In the next clip we see Anfisa’s cat Monkey destroying the letter as Anfisa offers words of encouragement: “Nice kitty. Good job. Yeah, who cares about them?”

Anfisa returns for another selfie clip to openly ponder what the production company plans to do next, since they seem to be under the impression that the Navas will be back. “I know that they got some footage of Jorge when he had his court hearing and whatnot,” Anfisa points out, before asking: “That’s what you’re going to show? Or what, are you going to show up at my door and start filming? Can somebody please explain?”

I confess that I would like to see the scene where a film crew arrives at Anfisa’s residence unannounced expecting to film, and she goes old school Anfisa on them!

UPDATE – There were apparently additional videos prior to the ones above in which Anfisa revealed that she and Jorge were willing to come back, but producers weren’t willing to pay them the amount they wanted. Here is the full video with additional transcript about their negotiating:

Anfisa reveals the real reason her and Jorge won’t be on the show anymore, the production company refused to pay them more money for another season #90dayfiance pic.twitter.com/kO4zO1Gr8L

When the production company asked us to be on next season, we told them. “OK, we’d love to do it, if you pay us more.” That’s what you expect from a “gold digger” like me, right?

So, the production company told us that we were asking for too much, and then we said, “OK, yeah, you know, yeah, that’s too much. So, BYEEEE!” So, after that, the mess started. They started sending us letters from their lawyers saying that they were going to sue us, that I cannot make any more YouTube videos, that I cannot post on Instagram, I cannot do anything.” [This is where the above recap picks up with Anfisa saying they had a choice between doing their own thing or being the “show’s little b*tches.]

If you’re wondering how in the world Jorge and Anfisa are able to turn away the money for another season, even if it is an egregiously low amount of money, that is due in part to the success of Anfisa’s YouTube channel. Back in September, we looked into just how much money she could make from her very successful videos, and the results were quite impressive! At the time, Anfisa “only” had 280,000 subscribers. That number has since increased to well over 328,000 subscribers!

I’ve said it many times before, and I will say it again — I have a lot of respect for how Anfisa has handled the exposure she and Jorge have received by being on the show. It’s very rare to turn reality show fame into any sort of successful independent business or brand, and Anfisa seems to be doing exactly that thanks to her hustle, marketing skills, personality, and sex appeal.

That being said, I will be the first to admit that, as a fan of the show, I am disappointed that I won’t be able to see more of Anfisa and Jorge’s story — especially during his arrest, court appearance, and prison sentence. But KUDOS to Anfisa for enabling herself to be able to say no!