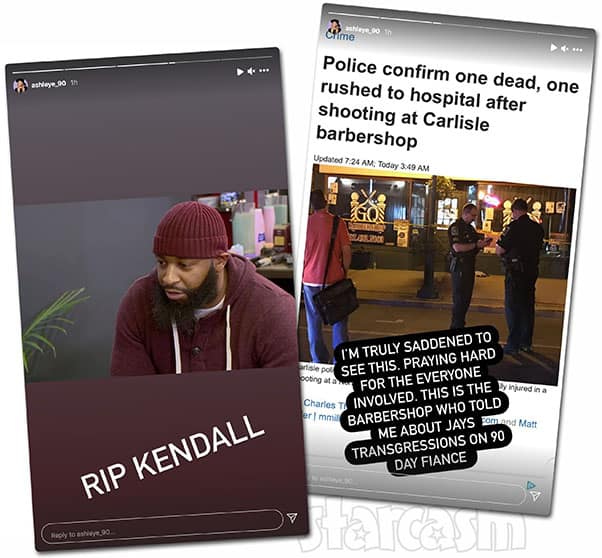 One person was critically wounded and another died after a shooting at the GQ Barbershop in Carlisle, Pennsylvania Saturday night. The barbershop was prominently featured on 90 Day Fiance as producers filmed numerous scenes there with Jay Smith and Ashley Martson.

Early Sunday morning, Ashley shared the news about the shooting on her Instagram. “I’m truly saddened to see this,” Ashley wrote over top of an article about the shooting. “Praying hard for everyone involved. This is the barbershop who told me about Jay’s transgressions on 90 Day Fiance.”

In her next Instagram posts, Ashley shared screen caps of Jay’s barber Kendell Cook and wrote: “RIP Kendall” along with a breaking heart animated gif. (Ashley incorrectly spelled Kendall’s name with an “a” instead of two “e”s.)

There has been no confirmation from police or news outlets about the identity of the person killed or the person critically wounded in the shootings.

UPDATE – It has been confirmed that Kendell Cook was the victim in the shooting. Police are currently looking for Michael Baltimore, another GQ barber who was featured on 90 Day Fiance, after charging him with criminal homicide, aggravated assault, illegal possession of a firearm, and recklessly endangering another person.

#90DayFiance Jay Smith's friend and GQ Barbershop owner Kendell Cook was killed & another man was wounded in a Saturday shooting at the PA barbershop. Another barber from the show, Michael Baltimore, is currently wanted by police as the main suspect. https://t.co/du3H2DqWIe pic.twitter.com/ksMxme7ZGZ

At approximately 7:30pm this evening, officers from the Carlisle Police Department responded to a business at 128 N Hanover St for reports of a shooting. One individual was found to be deceased at the scene and another is in critical condition. The perpetrator is not in custody. All indications are that the shooting was an isolated incident. Investigation is ongoing. Anyone with information or possible video footage is asked to contact the Carlisle Police Department at 717-243-5252 or submit a tip through our Crime Watch site.

“We’re looking for anybody that might have been inside,” Sgt. Josh Bucher said. “It was obviously chaotic when we got here. That’s why we’re still looking to talk to anybody that may have been in there or around at the time that it happened.”

The Sergeant added that preliminary indications were that all the shots were fired inside the shop. 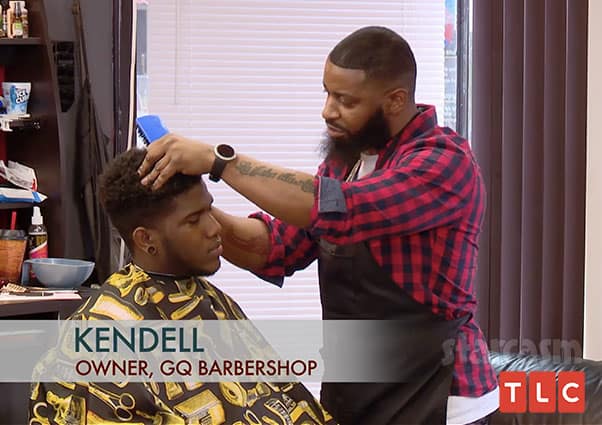 The shooting at the Carlisle GQ Barbershop comes less than four months after a shooting at the GQ barbershop location in Harrisburg, Pennsylvania. “A man dressed in black and wearing a ski mask stepped into the GQ Barbershop on the 4500 block of Locust Lane around 6:30 p.m. Saturday, opened fire, and ran away,” reported Penn Live on February 8. At the time of that article, the barber who was shot was in stable condition.

“The shooter walked in, shot the man, and then fled, but officers do not know in which direction,” Penn Live stated in a previous article about the incident. “Police believe the shooting was targeted.”

In November of 2019, another barber at the Carlisle GQ Barbershop was arrested and charged with multiple felonies after allegedly taking a 9mm pistol from a customer. The barber was Michael Baltimore, who was the one who revealed to Ashley on 90 Day Fiance that Jay had hooked up with a woman in the barbershop bathroom. According to the Pennsylvania Department of Corrections, Michael was on parole at the time of his arrest after being released in December of 2017.

When the identity of the deceased shooting victim from Saturday night is confirmed, we will update the post.