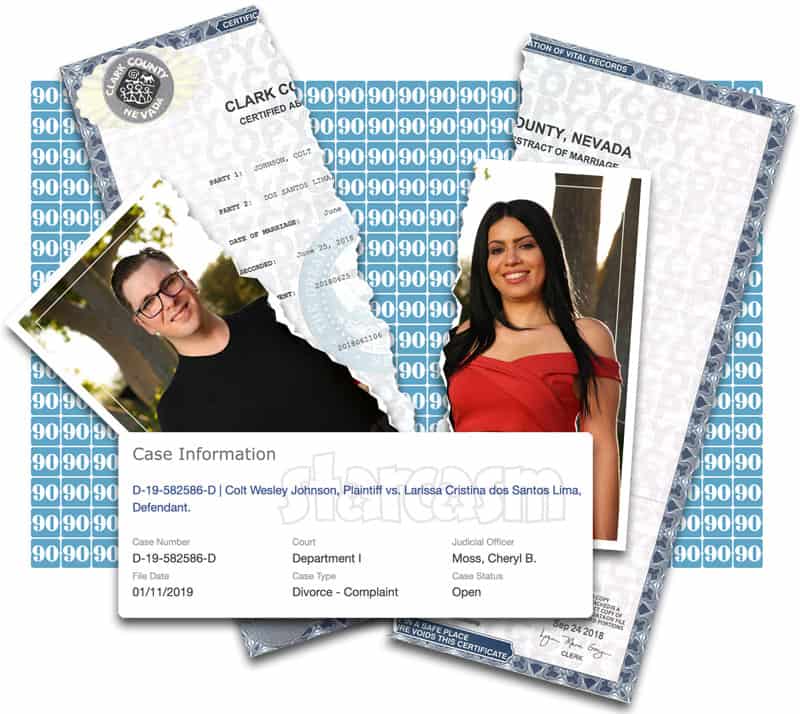 On the same day that 90 Day Fiance star Larissa Dos Santos Lima was arrested and charged with domestic battery for the third time, her husband Colt Johnson filed for divorce!

Court records indicate that Colt filed for divorce on Friday, January 11. It appears as though his mother Debbie paid the $299 fee, or at least it was her name on the credit card.

It has been less than six months since the couple got married on June 24, so I am unsure if there has been enough time for Larissa to have gotten her green card. If not, then certainly a divorce will lessen her chances greatly.

Long time fans of the show will recall that when Danielle and Mohamed got a divorce, Mohamed already had his green card. That means all he had to do was apply to renew it, which allows a little more flexibility. (Although Mohamed has still managed to have his difficulties.)

Season 3 couple Molly and Luis are probably a more suitable comparison. That being said, I really cannot understand how Luis has managed to remain in the United States this long! Immigrant spouses are allowed to still get a green card after a divorce in a few specific situations, including being in a relationship in which they have been the victim of domestic violence. Luis certainly tried to play that angle, but I didn’t get the impression that he had much of a case there.

Larissa may also try to argue that she was the victim of domestic violence in her attempt to remain in the US despite a pending divorce, but all of the altercations between Colt and Larissa in which police were involved resulted in her arrest, not his.

We don’t know much more about the divorce filing at this point, other than the fact that it was filed along with an Affidavit of Resident Witness and a Request For Issuance of Joint Preliminary Injunction. The injunction requires the parties adhere to the following guidelines in the case of Colt and Larissa:

You cannot hide, sell, or dispose of community property.

You cannot cancel or change the beneficiaries on any retirement accounts or insurance plans.

You cannot harass each other, the children, each other’s relatives, or family pets.

Something tells me Larissa may have difficulty with that last one.

The case is listed as pro se, which means that Colt has yet to retain a divorce attorney in the matter.

Regardless of whether or not you have chosen a side in this volatile relationship, I think pretty much everyone can agree that a divorce is the right decision for both Colt and Larissa.

As far as Larissa’s custody status, she is no longer listed as an inmate on the Clark County Detention Center roster, but she is still listed as “in custody” on VINE. Her friend Carmen revealed that she was heading down to bail her out Friday evening, but she did not provide any other updates. Larissa has yet to return to Instagram, and her next court appearance was scheduled for Saturday morning.

We will certainly keep you updated.

UPDATE – Larissa is currently out of jail.

If you missed out on all the drama just before and after the altercation leading to Larissa’s most recent arrest, just click here for a full recap — including videos and photos.

Did Kris and Bruce Jenner have a prenup? How much $ is at stake?