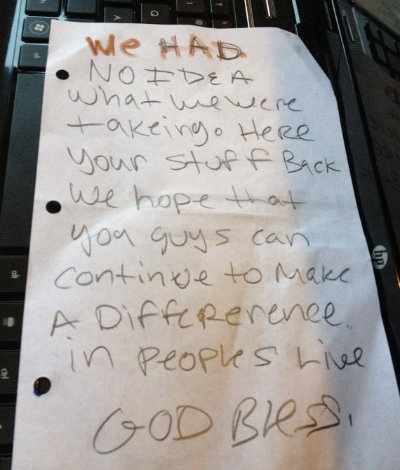 One set of thieves recently proved that even though they are willing to stoop below the law, they still maintain moral integrity! This was demonstrated through a strange series of events at the San Bernardino County Sexual Assault Service (SBSAS) in California.

According to a press release from the California Governor’s Office of Emergency Services, thieves broke into the non-profit facility late in the night of July 31. Working quickly and efficiently to avoid detection from the building’s security system, CBS Los Angeles reports the group lifted six computers, a laptop and a bag of valuables.

Police were notified of suspicious activity at the building and alerted SBSAS’ executive director, Candy Stallings. When Stallings arrived to assess the damage, she found a surprise at the front door.

“All my stuff was in front of the door,” she NBC Los Angeles. “There was a shopping cart, and there were the PCs that were taken, there was the laptop. Everything was there.”

When investigators went to work, they discovered more proof of the thieves’ remorse in the form of a note: “We had no idea what we were takeing [sic]. Here your stuff back. We hope that you guys can continue to make a difference in peoples [sic] live. God bless.”

San Bernardino Police Lt. Paul Williams told NBC it was the first time he’s ever seen anything like it.

“It appears the guilt of taking the property caused the return of the items,” Williams said.

Stallings also said she was dumbfounded by the turn of events.

“We were all pretty shocked,” Stallings added. “You’ve got to be kidding me. I was in disbelief. I got chills. I got very emotional.”

The San Bernardino County Sexual Assault Service provides support for survivors of sexual assault and domestic violence. The non-profit organization’s mission is “to provide a safe supportive environment to all survivors seeking individual counseling, advocacy, accompaniment and community resources.” All services are free.