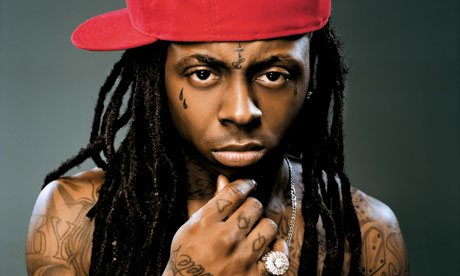 On The Show With Vinny where Lil Wayne revealed he’s engaged, he gave the story behind his favorite tattoo, which means a lot since he’s covered in ink. His very favorite one is located on his right forearm and says “In memory of Rabbit, it’s up to me.”

It’s pretty hard to see, but here’s a closeup of the arm the tattoo is on, you can see “Ra” very clearly: 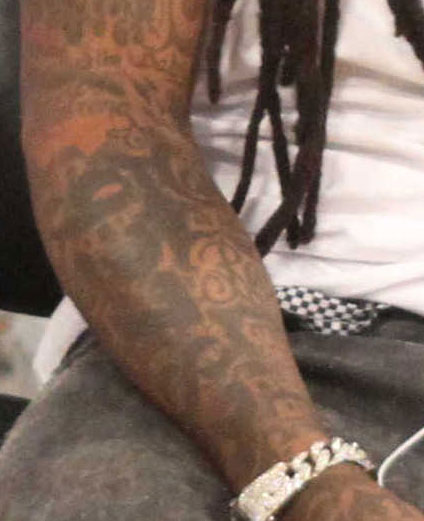 In 2011 Lil’ Wayne (real name Dwayne Michael Carter Jr.) spoke to GQ about his frustrations with his real father:

He don’t give a sh*t about me. And I don’t give a sh*t about him. I know his friends be like, “Damn, n*gga. That is not your son. Stop lying. N*gga, you could be living in a motherf**king ranch right now, n*gga.” You know, whatever your father’s into, if you’re rich, you’re gonna get him that sh*t. I would’ve got that n*gga all kinda harnesses, ranches—you know what I mean? I saw the n*gga recently—I had a show in New Orleans. And I ain’t afraid to put this out there, ’cause this is just how much I don’t give a f*ck about a n*gga, and I want people to see how you’re not supposed to be. I was parked at the hotel, and I saw him walking outside the hotel. Just walking back and forth. I’m like, “Look at this n*gga! You gotta be looking for me.” If Lil Wayne got a show in New Orleans, the whole of New Orleans knows. Basically, you’re not there for nothing else but me. So I call my man on the bus. I’m like, “N*gga, that’s my daddy.” He’s like, “Word? Oh sh*t. That n*gga looks just like you!” So I tell my man, “Go see what’s up.” So my man goes to holla at him. He tells my man, “Oh. I didn’t know y’all was here. I’m here waiting for this little ho to get off. Get off work from the hotel.” For real? That’s when I was like, “Typical Dwayne Carter.” So that’s what’s up with me and my real father. I don’t want to look like his a$$, but I do.

Here’s a 2001 video of Lil’ Wayne talking about his connection with Rabbit, saying he became a man the day Rabbit died:

Lil Wayne’s former drug of choice, Sizzurp, is both popular and deadly