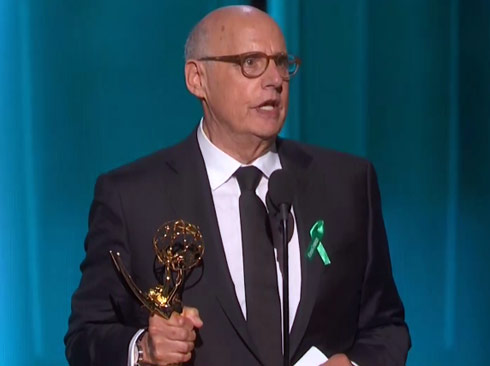 A number of attendees at the 67th EMMY Awards are sporting green ribbons, but most of us aren’t really sure what cause they are trying to draw attention to. There was some initial confusion on Twitter, as many people and media outlets were reporting that the green ribbon was for mental health awareness, but that was actually a lime green ribbon that was worn by a number of attendees at last year’s EMMY Awards to raise awareness for mental health in honor of Robin Williams.

This year, the green ribbon is for Demand Climate Action.

UPDATE – The green ribbons at the Emmy Awards were reportedly distributed by the Natural Resource Defense Council. From the organization’s Tumblr page:

It sure looks good with that best actor trophy, Jeffrey Tambor. Congrats!

Climate change is the most critical humanitarian crisis of our time. In December, hundreds of world leaders will gather in Paris with an urgent mission: working together to finalize a new global agreement for combating climate change.

Tambor, Julia Louis-Dreyfus, Louis CK, Don Cheadle, Mandy Patinkin, and Gaby Hoffman are just some of the actors spotted wearing the green ribbon tonight to show support for strong climate action that will leave a better world to future generations.

ACT NOW: Join them and add your name to #DemandClimateAction!

NRDC is the nation’s most effective environmental action group, combining the netroots power of more than 2 million members and online activists with the courtroom clout and expertise of more than 350 lawyers, scientists and other professionals.

Founded in 1970, the Natural Resources Defense Council mission is to safeguard the Earth: its people, its plants and animals and the natural systems on which all life depends.

Fore more about us, visit www.nrdc.org.

This is what Louie’s Hungarian girlfriend Amia said to him