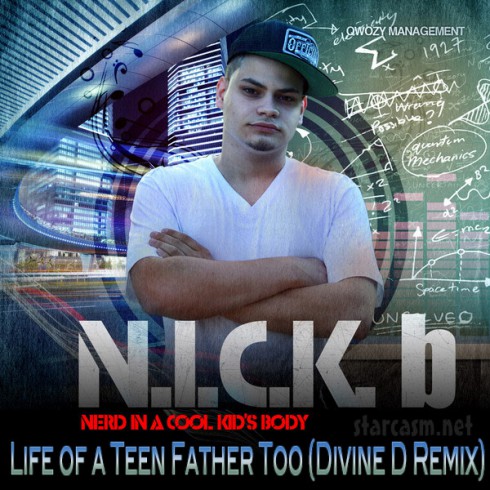 Towards the end of the second season of Teen Mom 2 we saw Kailyn Lowry’s ex Jo Rivera showing off his rapping skills in the recording studio. That session would eventually result in the song “Unthinkable Remix,” which also has an official music video.

Jo, who performs under the name N.I.C.K. b (Nerd in a Cool Kid’s Body), has now released the single “Life of a Teen Father Too (Divine D Remix),” which is currently available for download on amazon.com! (Just click the link)

Here’s a snippet of the song that includes Jo talking with his son Isaac:

So whatcha think? Does N.I.C.K. b got the chops?

You can hear more of Jo over at Reverb Nation. Here’s his “About Me” from the site:

N.I.C.K. B aka Nerd In A Cool Kid’s Body is part of the new generation of young MC’s coming out of New Jeruz. Focusing on lyrics and content. N.I.C.K B is truly a student of the game. With influences from The Wu Tang Clan, Eminem, Nas and Jay Electronica……Jo takes on the altered ego named N.I.C.K. B (Nerd in a Cool Kids Body). “Rhyming is something I did before the show and I’ll continue to do as long as I live” N.I.C.K. B. Born in Newark, NJ, raised in Union, NJ, taught N.I.C.K B both strength and knowledge and gave him the platform that would later assist him with his choice of content and his name.

When Alanis Morissette covered Black Eyed Peas “My Hump,” she gave it a little feeling