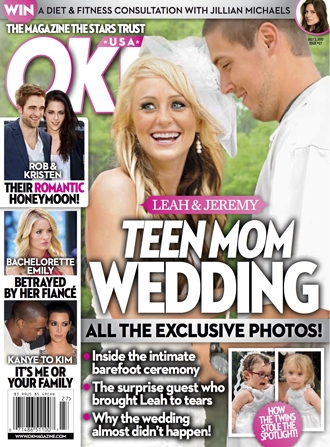 Teen Mom 2 star Leah Messer married Jeremy Calvert on April 4th in an intimate ceremony in Catlettsburg, KY. Not many details were released at that time and neither Leah nor Jeremy discussed it at all. Leah was filming the latest season of Teen Mom 2, and because of her contract she can’t discuss things that will be seen on the show before they air — and that includes the wedding.

Now, nearly 3 months after they officially married in April, new details are surfacing about a new ceremony Leah and Jeremy had June 11, 2012. OK! Magazine has the first picture of the young couple along with a picture of Leah’s twins, Aleeah and Aliannah. The magazine also reports that Leah and Jeremy, who met last August, were barefoot during the small ceremony at Murrells Inlet, S.C. which was attended by 15-20 of the couple’s close friends and family (including fellow Teen Mom 2 star Kail Lowry and her boyfriend Javi, who were pictured in the OK Magazine photo spread.) Leah’s twins with ex Corey Simms, as expected, stole the show as the flower girls.

The wedding did have a slight delay, when the couple went to get their marriage license and rings there was an issue with their rings, and that held them up for an hour-and-a-half! As a result, their wedding which was scheduled for 3:00pm was delayed until 4:30pm. (That’s what the OK! cover is talking with the “Why the wedding almost didn’t happen” teaser.)

They also faced issues with the weather, which also caused a delay. Guests had to wait in their cars for a while it got so bad, but Leah reportedly took it all in stride, telling her wedding planner Linda Gross “This is good luck. The rain is good luck.”

Was Leah a Bridezilla?  Gross says no way! “You hear about these ‘bridezillas’ who complain and gripe about everything, but Leah was there to celebrate with love. That’s what it was all about.”

We have a source who was there telling Starcasm that they also had a slight snafu when the DJ started playing the music for them to walk off (which was Black Eyed Peas’ “I Gotta Feeling”,) but Jeremy hadn’t even kissed his bride yet! Even with the minor snags (what wedding doesn’t have those?) it sounds like it was a beautiful and touching event.

The “surprise guest who brought Leah to tears” was probably her biological father, Gary Messer who attended the event, and escorted her down the aisle along with step-dad Lee Spears.

The newlyweds are continuing to play coy about their marriage and may do so until it airs on Teen Mom 2. In fact, Leah’s Twitter name is still listed as Leah Messer (Simms) from her first marriage and Jeremy’s Twitter states that he is “dating the love of my life.”

Fans will get to see the wedding for themselves when Teen Mom 2 returns this fall on MTV!

Jenelle Evans timeline of events since her heroin arrest