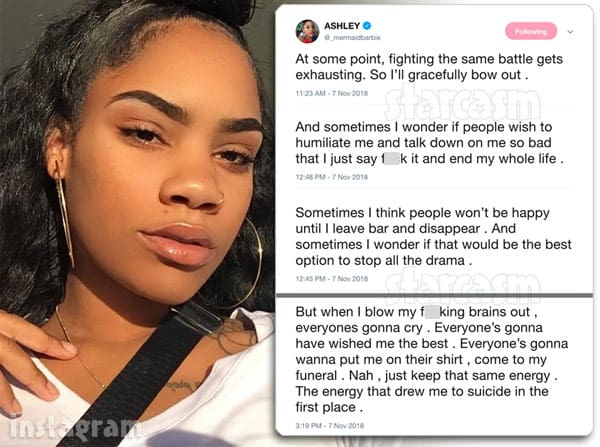 Teen Mom: Young and Pregnant star Ashley Jones has fans, friends, and family very concerned after she shared a series of tweets expressing her frustration at the negativity directed at her, and she openly contemplated suicide as a potential solution.

Ashley then seemed to suggest that she will not give in to the negativity:

But then I think like, if those people were happy with themselves they Pilsner [sic] be trying to break up a family or bully and humiliate someone. So even if I did kill myself, they wouldn’t be happy. Cause it’s deeper than me. It’s them. Their anger, their hate, their pain.

This won’t be the story of the girl who folded under pressure. This will be the story of a women, who held her head high through all the obstacles facing her, and has came out stronger.

“I have to remind myself that I am doing the best I can do,” she added, “and that’s all that I can do.”

Someone shared Ashley’s initial tweets with Bar’s mom Shen on Facebook, and Shen responded with concerned messages for Ashley:

So my heart works, Ashley posted something about suicide so i reached out to MTV and my son I would never want her to hurt herself that would devastate bar and holly ugh so prayers to her whatever she going thru she gets the help she needs for holly. Ugh as much as i don’t like her i don’t want her hurt. Someone reach out to her and tell her for holly sake please don’t.

I’m gonna be honest if the drama is causing Ashley to have suicidal thoughts I’m willing to try and work it out. I never want any one to hurt themselves especially if i am in the position to help take some of the stress away. I know its bigger than me but please someone tell her don’t and if us talking and working this out will help her suicidal feelings im willing to do. All the hurt that was caused to me means nothing or comes close to feelings of suicide. I don’t know if it will help but im willing to help. I truly am worried and willing to help. Prayers to her and her well being. I always said of she is not okay my grand baby will not be okay. So Ashley im unblocking u and if u think us talking will help u I am will ing to talk but baby dont hort yourself my son loves u and holly needs u.

Shen’s concern dried up, however, once someone shared the additional positive tweets by Ashley:

Someone tagged Ashley in a tweet attempting to tell her that Shen seemed genuinely concerned. “Ashley just want to tell you that despite your feud with Shen she is very concerned about your comment on suicide and doesn’t wish that that would be an option for you please read her message below.” The tweet included this message from Shen: “Tell her I don’t want her ever feeling that way and if calling a truce will help her I am willing to do it. Never do I want her feeling like hurting herself God that would be horrible ugh.”

But, Ashley had already received word of Shen’s change of heart, and she wasn’t buying the concerned sentiment. Ashley responded with a screen cap of Shen’s “fake suicide” comment above and she wrote: “Concern from a genuine place? Or so she use my name for attention and then bash me.”

Nothing she ever does in genuine. Hope you learn that. She only reaching out cause she doesn’t want my suicide on her hands. She doesn’t want to live with the fact that she talks so bad about me everyday and it would be her f**king fault. I’m done with her.

Once again, the Twitter user argued that Shen really did seem to care. Ashley responded with a string of ?????? emoji before adding: “Why. Because she doesn’t wanna go to jail for bullying until someone killed themselves. Yeah seems self vested to me. But okkkk.”

Shen then jumped completely off the concerned train and lashed out at Ashley calling her evil!

Wow she is pure evil who plays with suicide smh I was truly worried and this is why i don’t believe anything nor would i ever trust her. She has gone to a whole new level of low smh the little girl who cried wolf. 1) ran to court with false accusations 2) ran to police for fake domestic violence 3) now fake suicide thoughts smh no one better ever tell me im wrong this girl is pure evil and makes a mockery of people with real mental health women in real domestic violence. Well at least she is okay but holly won’t be if Somwnw doesn’t step in Ashley is really dangerous

Ashley shared a screen cap of Shen’s post and tweeted:

And then I get this. You’ve talked so much sh*t about me. So many people tried to fight me at your hands. So many threats. So many allegations. So much drama. Every f**king day. And then at my weakest moment you [bash] me for tying to find some happiness?

Ashley’s last tweet was EXTREMELY concerning. “So I’m out,” she wrote. “All the way. Good luck in life.”

Shen mentioned in the comments of one of her concerned Facebook posts that she had spoken with MTV producers who “messaged me back and said she was fine.”

Meanwhile, Bar hasn’t addressed Ashley’s concerning comments at all on social media as his tweets have been mostly about election results.

Ashley may question Shen’s motives, but her initial comments were spot on in so far as any talk about suicide by anyone is to be taken seriously. That being said, I think it is impossible for Shen to say ANYTHING about Ashley at this point that isn’t going to make matters worse — even if they are messages of concern.

Regardless of Ashley’s seemingly positive conclusion to her posts, I think there is obviously huge reason for concern given her other statements, and I hope that her friends, family, and show producers are taking this seriously.

UPDATE – Ashley has since responded by saying her tweets about suicide were just hypothetical:

Point being, people will talk about and bully you to no end. Drive you to the brink. And they will only care once you are off the ledge. Then they will be feeling sad, and ashamed. Because deep down they know they contributed.

Thanks for all the well wishes guys. Never said I wanted to or was going to kill myself. I was making a point about how people indirectly negatively affect people’s life’s. So watch what you say. And watch who you say things to.

I would never play with suicide. But it is interesting how some of you who previously have talked so bad to me all of the sudden had a kind word to say. ??‍♀️??‍♀️ keep that energy.

And that’s my whole point. People say things and never know how hard that someone took it. But when the person dies or is missing, everyone is sad and hurt.

No. It’s just funny that people will talk a bunch of sh*t to a person with no concern for their mental health at that point