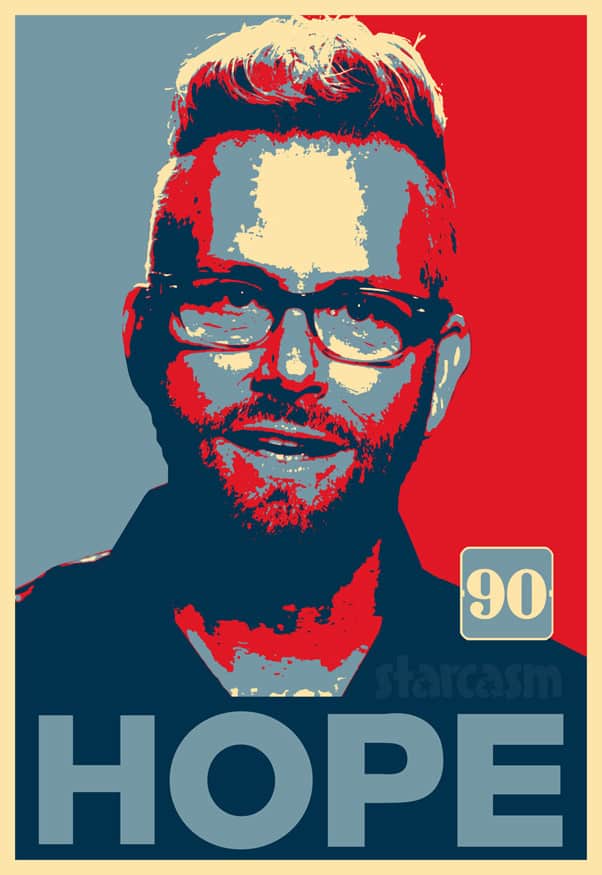 It’s been a rough few seasons for hopeful fans of the 90 Day Fiance franchise. In stark contrast to the early seasons, the recent installments of Before the 90 Days, 90 Day Fiance and The Other Way have been chock full of betrayals, rap sheets, insincerity, heartbreak and Darcey. The shows have definitely delivered the drama, but the story lines have left a lot of fans quite desperate for a couple they could pull for from the beginning who actually finish with a happy ending. Although it might be a huge jinx to say it, it appears fans may be getting exactly that on the new season of The Other Way thanks to Kenneth and Armando!

57-year-old Kenneth Niedermeier is from St. Petersburg, Florida and he is moving to Mexico to be with 31-year-old Armando Rubio from San Felipe, Mexico. The 90 Day Fiance franchise had a previous same sex couple with Stephanie Matto and Erika Owens, but Kenneth and Armando with be the first gay couple on the show. (I won’t say anything more about Stephanie and Erika other than fans were a little disappointed with their story.)

Kenneth is a single father of four via in vitro fertilization, including triplet daughters! His children are all grown, but when the cameras start rolling, Kenneth is still living with his daughter Madison and his grandson Cooper.

Kenneth comes across as an incredibly sincere, loving father and grandfather who took on the incredibly difficult task of being a gay dad in the early 1990s. And as far as his relationship, Kenneth seems to have completely fallen for Armando after the two originally met in an online support group for gay fathers.

However, Kenneth is very close with his grandson Cooper, and the scene in which Kenneth and his daughter Madison talk about his imminent move will have you in tears — just like them. Kenneth is clearly making a VERY difficult decision to pack up and move to another country, but unlike a lot of his co-stars from The Other Way, his decision appears to be well thought out.

We must be careful though! 90 Day Fiance producers are quite infamous for introducing cast members in a very sympathetic light, only to pull the carpet out from under hopeful fans as they slowly tear the curtains away to reveal people that are anything but sympathetic. (Some perfect examples would include Laura, Ricky and Big Ed.) I’ve been hurt too many times before, so I am extremely reluctant to invest too much of my own heart into believing in certain cast members and hoping for their happily ever afters.

Here’s the accurate tweet I wrote in February that references two of the examples above:

#BeforeThe90Days I REALLY want to like Big Ed, but I felt the same way about Ricky after the Season 2 Premiere and wound up getting my heart trampled. And then dunked in poop. And then set on fire. 💔💩🔥 I've got serious trust issues with this show! 😂 #90DayFiance

(I should point out that a lot of fans — myself included — were eventually won over by Michael and Juliana, but that was a long hard battle!)

Despite my trust issues, I am ALL IN with Kenneth and Armando! I say that for a number of reasons. Number one, I just like Kenneth, and I believe him.

Number three, the fact that they are the first gay couple on the show has me thinking that show producers might be a little more willing to leave a true happily ever after alone. Sure, there will be some issues with being openly gay and living in Mexico. Plus, it looks like Armando’s parents might not be fully aware of what’s going on. But, I believe that Kenneth’s personality, sincerity, and the fact that he seems to wear his heart on his sleeve will be more than enough to keep his story line compelling and entertaining for viewers. (And we haven’t even met Armando yet!)

UPDATE – I put this post together after just watching the first hour sneak peek. Armando made his debut during the two-hour premiere and revealed his very emotional secret. after knowing he was gay, Armando still married and tried to be the “macho” man he felt pressure to be. He had his daughter and it was much, much later before he revealed to his wife that he was gay. She then outed him to his mother. The reaction was so harsh that Armando had to basically abandon being out. He and his wife split up, and a few months later she passed away in a car accident. He and Kenneth simply HAVE to have a happy ending!

Number four, I did my usual vetting via online sleuthing and I couldn’t come up with so much as a speeding ticket for Kenneth. That doesn’t mean he doesn’t have any skeletons, but if he does, they don’t appear to be anything like pending felony charges, a bitter custody battle, or a fling with Jesse Meester. It also means that he isn’t some sort of aspiring social media influencer or actor with a “Daddy O Triplets” YouTube channel and caricature stickers of himself for sale. That indicates that there is a slight chance he is doing the show because he just wants to share his international love story. And what a great international love story it is!

Speaking of my vetting process, it appears to line up perfectly with the story we will be shown on screen. Kenneth’s house sold in July of last year for close to $350,000. Kenneth left for Mexico four months later on November 30. Here’s his Instagram post about the trip:

Today I begin one of the biggest and most amazing journeys of my life… The smile you see on my face in this picture is because of one person, Armando! I am picking up my life here in Florida and in America and moving to Mexico, for love! I leave on a four day road trip with my 15 1/2 year old Puppy Truffles, to start a new chapter with Armando and his daughter Hannah.

Behind my smile I have sadness as well, leaving my family here pains me more than they know, but how lucky am I to have the most supportive children who in the end back this move 100%! My biggest heartache is leaving my grandson Cooper who owns his Grampy’s heart, I’ve helped raise this boy for his almost 4 years, I’m going to miss seeing that beautiful face everyday!

When I left my hometown of Toledo Ohio when I was 19, I was running away from something, running from who I couldn’t be…in Florida I found myself and who I was meant to be! Tomorrow I am running again, not away, but towards something, to love, ❤️🇲🇽 #lovewins #loveislove

Here’s an update from Kenneth’s daughter Cassidy shared on Instagram on April 28:

Seriously missin my daddy….😢 can’t believe you moved to Mexico almost 5 months ago, life is not the same around here w/ out you, I miss seeing your face and hearing your voice all the time.

Literally in tears right now writing this, my daddy is my best friend and although I am so happy he’s livin his best life in Mexico with the love of his life, my heart isn’t the same without him around

And with this quarantine canceling my trip to see you at the end of March, and not knowing when I can book another plane ticket, it’s got me feeling emotional.

I love you with all my heart daddy!!!❤️❤️

Oh Cass, you have madd tears come down my face…you will never understand how much my life has been about you, your sisters, brother and Coop, why my move was so hard, you guys have been my world…it was so painful and my heart was so sad when I moved… my love for you all has no boundaries, always know that. You will visit sooner than later I know that! You are my child twin, the Apple definitely didn’t fall far from the tree with you! 😀 Love your to life my beautiful daughter ❤️

“I love you daddy! Forever and ever,” Cassidy responded.

😭 Damn it TLC, you better not mess this up!

I will leave you all with Kenneth’s introduction to himself from the 90 Day Fiance: The Other Way Season 2 Premiere. It’s much better with video and audio, and thankfully TLC shared a clip with part of his intro on YouTube:

“I was born and raised in Toledo, Ohio. I had a very happy, normal childhood. I left Toledo because I knew there were things happening within me. I couldn’t put my finger on everything, but I knew I was different.

“I came to Florida to see if I can find myself. And one night, I got ready, went to a gay club, and, BA-DAH! I was home!

“I was 19 when I came out in Florida. But, even though I felt relief in my heart, I still had my family to come clean with. My mom was a very strong, moral Catholic. My dad was a head football coach for 40 years. And I wrote an eight-page letter to them.

“And then I got a call, and the first words my mom said: ‘Don’t worry about it, you’re fine!’ They didn’t have any problem with it. They loved their son, and it didn’t matter.

“Back in the ’80s and early ’90s, gay men weren’t having children. The in vitro process was very expensive, even more than today, and you had to be married. I’ve always wanted to be a father, so nothing was going to stop me. And a friend of mine offered to have a child for me. So, we had to fake being married. And no, I didn’t tap that! [laughs] It was all medical!

“With that, I had Bricen. Tried one more time, and BAM! Triplets.

“Raising four kids, and all within four years, and three the same age, it was very challenging at times. But I wouldn’t change a minute of it, not one second.

“The whole time I’m raising my children I had two different long-term relationships. But they didn’t last, and I thought I had my life set. But my life has taken another path now, at my age, that I didn’t think it was going to take. I’m moving to Mexico in two weeks, to be with the love of my life. 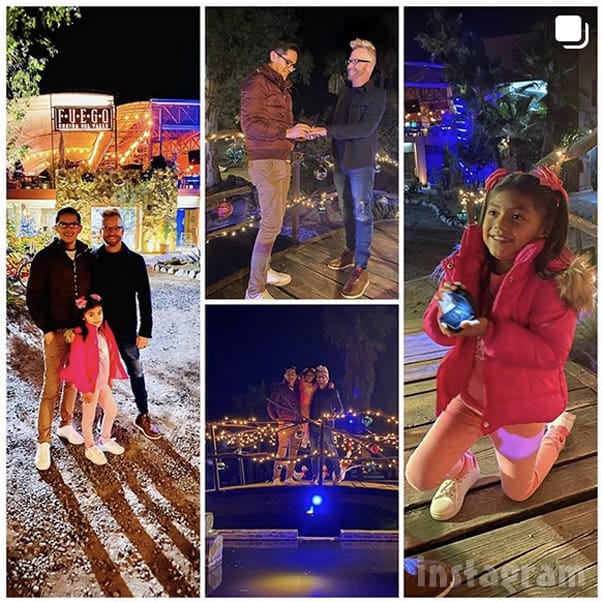 “Armando is 31, and he’s from San Felipe, Mexico. This man has got it all: Beautiful smile, beautiful eyes, his body is great. [laughs] We met on a social media page that was a support group for gay fathers. Armando has a young daughter who’s 6, and we just became fast friends. I was going to a wedding in California, so we met up in Mexico. We hung out for a few days there. Soon after I got home, he told me that he could see himself with me. I had reservations because I was 26 years older than him, he lived in another country, and he has a young daughter, so he can’t come to the United States.

“I never thought I would move to another country or do anything like that, but I’m ready to go, to be with Armando, to be with my love. The time is now.”

90 DAY FIANCE Evelyn Cormier America Idol audition clip, find out when she will be on