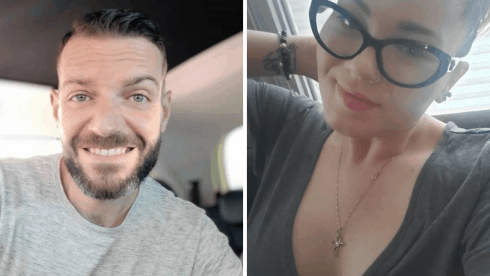 The scene with Amber opens with her being a little coy about her budding new relationship.

“Everybody that’s in my life right now understands what’s numero uno, and that is James, Leah,” Amber says. “And if I want a happy relationship, then they have to understand that.”

When asked if she’s ready for a relationship, Amber reveals that she has been talking to someone she describes as a “very nice person.” She continues to not that “chemistry matters a lot and you can tell.”

Meanwhile Amber’s ex Andrew is just focused on being a single dad and doesn’t have thoughts of moving to a new relationship. He feels isolated in Indiana and hopes to move back to California with James so he can be with his family and build a life there.

“I’m really enjoying getting to know Dimitri, a new guy I’ve been talking to. I had other guys try to talk to me. He was the only one that never brought up d**k pics and things like that,” Amber later says about Dimitri.

“He’s a very handsome man. I started opening up to him and we decided to meet since we like each other. I let Gary [Shirley] know about him and I hope he’s supportive.”

In January US Weekly claimed to have an inside source confirming that Amber and Dimitri are dating, and that while he’s not a “superfan” he reached out to Amber after seeing her show and thinking she was pretty. The source also claims that he has come to the US to see Amber and as of January, was staying at Amber’s house.

Dimitri is in his late 30s and reportedly has two children of his own: a son and a daughter. He has shared photos of his kids on his Instagram profile, which is now set to private.

On tonight’s episode Amber’s ex Gary Shirley, revealed what he knew about Dimitri at the time after Amber gave him a heads’ up about dating him. “I know he has kids. One is 13, the other might be 11,” Gary said.

When Gary’s wife Kristina raised concerns about a potential language barrier Gary replied: “There is one language we all speak: It’s love. You got to really make sure it’s the right person for you.”

When news broke of Amber dating Dimitri, Amber’s former Teen Mom co-star Farrah Abraham had some concerns about the relationship.

“Everyone’s on block, but I think that’s best because I do hear, like, people are still dating wrong,” Farrah told US Weekly. “I do hear people are not making wise choices and that’s kind of scary.”

“I do date out of the country,” Farrah continued. “I do do these amazing things, but I’m not having someone come from another country with no Green Card living with me. I mean, there’s scary elements to that. I think we all need to be aware of that.”