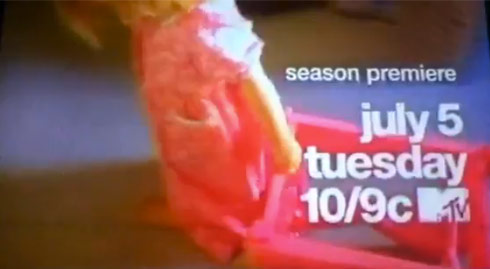 MTV used it’s Movie Awards show last night to not only launch their new series Teen Wolf, but also to premiere a batch of Teen Mom Season 3 previews! Instead of one spot that covered all four girls in one sweep the network did individual 30-second commercials for each. (Actually, we only know for sure that there was one for Farrah and one for Amber.)

Here’s a rough recording of Amber Portwood’s preview which is a stark reminder of the traumatic year she has had, including an arrest, multiple break ups and even death threats:

It appears as though the focus will be on Amber’s on-again, off-again, on-again, off again ad infinitum relationship with baby daddy Gary Shirley and the affect of what is going on in Amber’s life on her daughter, Leah. It also looks like Amber’s storyline will feature recurring sessions with a therapist, much like Farrah Abraham in Season 2.

Surprisingly, Amber’s interim boyfriend Clinton Yunker was not featured at all.

We’re still trying to track down the other commercials as well as a better version of Amber’s, so please let us know if you find one by dropping us a line at starcasmtips (at) yahoo.com or by leaving a comment below!

UPDATE – We tracked down another Teen Mom Season 3 preview with all four girls! CLICK HERE to check it out! (Be warned – it’s another pretty rough Youtube clip)

UPDATE – We can now also add Farrah Abraham’s commercial to the collection! CLICK HERE to watch it!