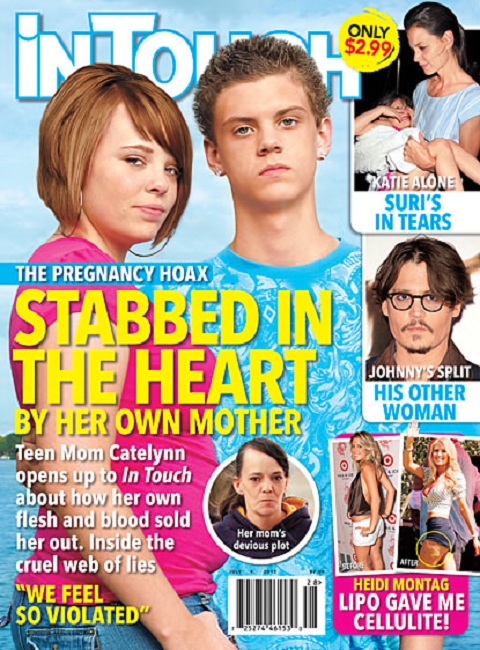 A few weeks ago, Teen Mom star Catelynn Lowell made headlines for being pregnant — even though she wasn’t. On June 13, the cover of In Touch Weekly read, “I’m Pregnant!” Inside was an interview with family friend, Jamie Pyrzewski, who spoke of Catelynn and Tyler’s excitement and claimed Catelynn had broke the news to her a few weeks prior. Catelynn quickly shot down the rumors, and said she didn’t even know who Jamie Pyrzewski was. Now she’s opening up about who is behind the whole mess.

“I want to set the record straight. I’m not pregnant,” Catelynn tells In Touch in a new interview. “My mom lied.” Earlier this month, in an elaborate hoax, Catelynn’s mom, April Baltierra, had arranged for Jamie to do the interview about Catelynn’s alleged pregnancy. April even sent documents of a pregnancy from a local doctor, claiming she had gotten it from Catelynn.

“I love my mom, but it’s frustrating,” Catelynn says. Catelynn’s fiancé, Tyler Baltierra, adds, “We feel violated. I’m shocked that she would go to this length. It just crosses the line.”

After Jamie’s initial interview, April called the magazine herself claiming to be Catelynn and confirming that she was pregnant. She even told the mag not to call Catelynn directly and speak to her a second time because the stress of the call could cause her to “lose the baby!” We’d have to agree with April’s ex husband, David Lowell, who says “I don’t know how she sleeps at night.”

As for her “family friend,” Jamie, Catelynn tells In Touch, “I used to see her once in a while when we were kids. I don’t even like her.”

What’s April saying now? She tells the magazine, “Catelynn was fully aware of the story. She knew all about this.” Yea, sure she did. The nerve..

Of course, if they got the first story wrong, how do we know that this one is right?

Still confused? Let Bugs Bunny and Daffy Duck explain it all to you!