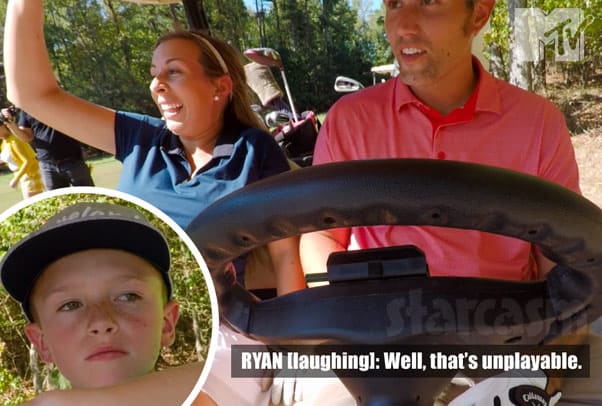 On Tuesday night’s episode of Teen Mom OG, dad Ryan Edwards got the very rare opportunity to spend some one-on-one time with his and Maci’s son Bentley as they enjoyed a round of golf together. Actually, judging from what viewers saw on screen, Ryan may have been the only one of the two that enjoyed the time together as he and wife Mackenzie continuously chided Bentley for falling behind in their head-to-head match.

After there was a discrepancy between Ryan and Bentley over the stroke count on a particular hole, Bentley hopped back on the golf cart with grandparents Larry and Jen and he seemed flustered as he explained how many strokes were taken by each team. Larry can be heard quietly telling him: “It’s OK. It’s OK.”

The camera and audio shifts to Ryan and Mackenzie on their cart. “He’s already mad because he’s losing,” Ryan says as he smiles.

We then see Bentley tee off on a hole, and apparently the ball went out of play.

“Well, that’s unplayable,” Ryan says as he and Mackenzie laugh [photo above].

Jen then scolds her son: “Ryan Christopher, be nice.”

The scenes drew some criticism from viewers on social media, including comments on Mackenzie’s Instagram. She came to her and Ryan’s defense and explained that what viewers saw was edited footage that didn’t tell the full story. Here are some of her interactions:

COMMENT: Are you okay with last night’s episode? Your husband needs to get off drugs, and needs to stop making fun of his first born son that he hardly even sees.

MACKENZIE: Were you there? No, but thanks for your input hippie-stoner.

MACKENZIE: Lol omg sit tf down. Everyone is competitive.

COMMENT: RYAN IS SO MEAN TO BENTLEY LIKE WTF & Mackenzie does even say anything to him wtf was that about?

MACKENZIE: It was friendly competition. Everyone had planned this golf trip weeks in advance with all of the smack talk that went along with it. We had a great time!

COMMENT: I guess my thing is Bentley always looks so afraid to be around Ryan, I hope Ryan isn’t mean to you or him.

MACKENZIE: I can see how you would think that through the shows lens. But that’s not the case in person ?

I understand both sides of this debate. Bentley is a competitive kid who participates in A LOT of sports, so I have no issue with his dad smack talking and being competitive. (I believe they were competing on teams of two, with Ryan and Mackenzie paired up on one team, and Larry and Bentley paired up on the other.)

However, Ryan did come across as a bit childish and petty in the scenes that were aired. Plus, we weren’t shown any sort of scenes after the match to see if Ryan laughed it off and managed to bond with Bentley despite the competitiveness.

Regardless of my take on #golfgate, it is good to see Ryan and Bentley able to spend some time together. I’m sincerely hoping this season will be a positive trajectory for Ryan all around, including his relationships with Bentley, Mackenzie, Maci, Larry, Jen, and his children with Mackenzie. I’ve been watching the show for a decade, so I know not to get my hopes up, but that won’t stop me from being cautiously optimistic.